Fill out the form below to receive additional information about our Wild Nature of Croatia & Slovenia or give us a call at 800-543-8917. 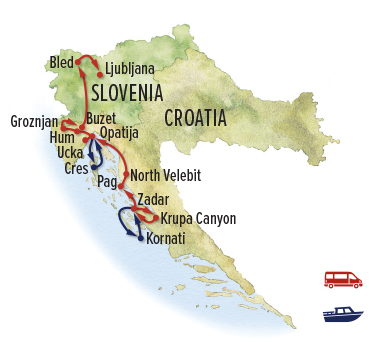 Day 1: Zadar, Croatia—City Tour
Arrive in Zadar, where you are met at the airport and transferred to our hotel in the historic Old Town. Zadar lies along Croatia’s northern Dalmatian Coast and is one of the most ancient cities on the Adriatic Sea—archaeologists have found traces of a Neolithic settlement here dating to the 9th century BC. Zadar was eventually conquered by the Romans as part of their advance to the eastern shore of the Adriatic that began in the 3rd century BC. On our city tour this afternoon, observe how the streets were laid out on a Roman rectangular grid, with a forum, thermae and water system fed by Lake Vrana. When the Holy Roman Empire split in the late 3rd century, Zadar became part of the Eastern Roman Empire, known as Byzantium, and remained the capital of Byzantine Dalmatia until the end of World War I. Highlights of our walking tour include the Roman Forum, ancient city walls and gates, prominent churches and cathedrals, and the Sea Organ, an architectural musical instrument “played” by sea waves. Reconvene this evening for a welcome dinner with our Expedition Leader.

Day 2: Krupa Canyon / Winery Tour
In the hinterlands of Zadar, the Krupa River is among the most beautiful rivers of Croatia, flowing through a limestone gorge beneath the imposing Velebit mountain range. The view from the edge of the deep canyon carved into Dalmatia’s karst plateau is striking, with numerous waterfalls tumbling into the crystal-clear river. We hike to the bottom for a closer view, appreciating why the river and its wild environs have been designated a national cultural asset by Croatia’s government. We also visit Krupa Monastery, founded in 1317 by Bosnian monks who were forced to flee when the Turks invaded. The monastery, the oldest in Croatia, has shared the fate of the Serbian Orthodox people in the region, devastated in subsequent invasions yet repeatedly rebuilt. Later, stop for a tasting at an award-winning organic vineyard and winery, marking among its honors a visit by the Swedish royal couple, King Gustav XVI and Queen Sylvia.  This evening, we head out to dinner at a local restaurant.

Day 3: Kornati National Park—Private Boat Tour / Pag Island
Set off from the pier this morning on a private boat tour of Kornati National Park, a dense archipelago comprising more than 100 mostly uninhabited islands, islets, reefs and craggy rocks strewn across the blue Adriatic. Over millennia, the karst islands have been sculpted with caves and holes and are dotted with myrtle and holm oak. Varied flora grows in meadows and on coastal cliffs, including Adriatic and Illyrian iris. After playwright George Bernard Shaw visited, he wrote, "On the last day of the Creation God desired to crown his work, and thus created the Kornati Islands out of tears, stars and breath.” Because of the exceptional beauty of this marine landscape, with its deeply indented coastline and intensely biodiverse underwater ecosystem, the Kornati maritime zone was declared a national park in 1980.

We may see bottlenose dolphins and loggerhead sea turtles as we cruise among the islands, stepping ashore at various spots to swim. On the island of Kornat, we walk to Our Lady of Tarac church, built in the 17th century, and to the 6th-century Tureta Fort, offering a magnificent view over the archipelago. An authentic Dalmatian lunch awaits in a small fishing village, served in the shade of century-old olive trees. By mid-afternoon it’s time to sail back to the mainland, then continue to nearby Pag Island to spend the night. Enjoy dinner at the romantic Michelin-starred restaurant Boskinac, surrounded by classic Mediterranean scenery.

Day 4: North Velebit National Park—Via Dinarica Hiking / Opatija
Head into the wildest part of Croatia to walk a few miles along the Via Dinarica, which threads through North Velebit National Park. This 1,200-mile trekking route knits together Slovenia, Croatia, Serbia, Bosnia and Herzegovina, Montenegro, Kosovo and Albania, tracing the spine of the Dinaric Alps down the Balkan Peninsula. Combining a network of old shepherd paths, strategic war routes, established trails and new connections, it weaves through dramatic limestone karst fields, meadows, valleys, beech forest and shimmering alpine lakes, traversing a pristine slice of wild Europe. The diversity of karst forms, plants and animals make this one of the most impressive regions of Croatia’s Dinaric Alps, which are among the most rugged and extensive of Europe's mountains. More than 1,500 species of mountain flora and fauna thrive here, including edelweiss and European mountain pine, ural owl, golden eagle, chamois and more. And while we are unlikely to see them, this well-preserved ecosystem also shelters brown bear, wolf and lynx. En route we survey a view over the Adriatic including the islands of Pag, Rab, Goli, Prvic and Krk. Cultural heritage within the park is a highlight, too, with remnants of centuries-old dwellings, old cattle pens and dry stone walls.

After lunch, continue to the Opatija Riviera where our 5-star boutique hotel overlooks the sea. Popular in the 19th century with the Austro-Hungarian elite, the Opatija coast remains a stylish vacation destination. An evening walk along the seafront promenade takes us to the picturesque fishing village of Volosko, where we sample some fresh seafood for dinner.

Day 5: Cres Island—Griffon Vulture Boat Tour / Ucka Nature Park
A private boat tour to the island of Cres reveals a large colony of rare griffon vultures that nest on cliffs directly above the sea. Protected since 1969 in the world’s first reserve for this species, they are among the largest birds in the world, weighing 15-25 pounds and boasting a wingspan up to 9 feet. We also visit the Beli Rescue Center for Griffon Vultures, dedicated to preserving this strictly protected species. Injured birds are brought here to be rehabilitated, mostly young ones that fall from their nests into the sea on their first flight attempts—the mortality rate for young vultures in their first year is a staggering 75%. They produce only one egg a year, so rescuing each bird is important. The Cres reserve is also home to other bird species such as the golden eagle, eagle owl, peregrine falcon, kestrel, raven, shag, blue rock thrush and more. After lunch, we cruise back to the mainland to spend the afternoon exploring Ucka Nature Park. Wedged between the green slopes of Mount Ucka and the blue expanse of the Kvarner Gulf, the park is rich in archaeological sites, with evidence of human habitation in prehistoric times.

Day 6: Hum / Truffle Hunting / Istrian Wine Tasting / Buzet
On a drive across the Istrian Peninsula, we reach the medieval hamlet of Hum, reputedly the smallest town in the world, with fewer than 25 residents. Our route follows the Glagolitic Alley, a road between Roc and Hum along which stone monuments erected in the late 20th century  represent letters of the medieval Glagolitic alphabet, an archaic Slavic script that survived in Croatia until the late 19th century. Hum’s size belies its rich thousand-year-old history, although its town walls and fortifications are a reminder of regular battles fought over the centuries.

A highlight today is a visit to the home of a local family who are third-generation truffle hunters. Our friendly hosts tell us all about this coveted culinary treasure, and how they use dogs to sniff them out. We'll search the forest for truffles with them and taste various truffle products. Continue to the charming towns of Motovun and Groznjan, surrounded by green hills and white limestone soil planted in vineyards and olive groves. Springs nurture wildflower meadows and quiet woods where wild game flourishes. Cultural treasures abound, including ancient churches, castles and palaces whose past glory was recovered through restoration. Groznjan is home to numerous artists and studios, with an acclaimed city gallery. Film, jazz and classical music draw visitors from around the world to summer festivals. At the famous Kabola winery, we sample assorted Istrian wines, then head to our hotel in Buzet via narrow roads through old Istrian villages. Enjoy dinner this evening at a local restaurant.

Day 7: Slovenia—Pokljuka Plateau / Bee Farm / Bled
This morning we leave Croatia and enter Slovenia, crossing the forested Pokljuka Plateau. This rounded karst mountain in Triglav National Park was carved by the Pokljuka Glacier, leaving many peat bogs that provide habitat for varied plants and animals. The plateau is little traveled but exceptionally scenic, covered in pine, beech and Norway spruce and punctuated by hidden precipices and sinkholes, grassy pastures and scattered villages. We take a hike at the base of a rocky hillside where birds are abundant—look for Western Bonelli's warbler, white-throated dipper, red-backed shrike and gray-headed woodpecker, numerous butterflies, and reptiles like the yellow-belied toad and eastern green lizard. Reaching the summit, we are rewarded with a matchless view over Lake Bled.

Slovenia is considered the heart and soul of beekeeping in Europe, and we stop at a family farm to learn about the long practice of apiculture. One of the apiaries here is 90 years old. Our hosts teach us about the life of bees and how honey is produced and extracted. Slovenia is famed for the quality of its honey, which we will taste in different forms, including pollen, honey liqueur, homemade gingerbread and potica, a traditional Slovenian nut roll pastry. Our encounter with country life continues as we join a local family for dinner at their home. Our hotel in the forest outside Bled provides a memorable experience, too, offering a completely zero waste experience.

Day 8: Triglav National Park—Kayaking on Lake Bohinj
Lake Bohinj is the crown jewel in the Julian Alps, and it's never far from view today as we explore Triglav National Park. We ride a cable car to the top of the Vogel ski area to access a hiking wonderland, with grand views of the snow-crusted peaks and sparkling lake far below. Ascending the ski slopes through a dwarf pine forest, we reach a panoramic plateau from which we can reach the summits of Mount Vogel and Mount Sija—or simply enjoy the vista from the alpine meadows at the top of the lift.

This afternoon, we stop for an artisan cheese tasting in a nearby village famous for its cheese production, which dates to the 13th century. The first cheeses were made by mountain farmers who grazed their cattle in summer on the lush slopes above Lake Bohinj. Then, cap off a perfect day with a kayaking excursion on the shimmering blue waters of Lake Bohinj before a farewell dinner this evening at a restaurant overlooking Lake Bled. Famous Lake Bled is the subject of countless photos and paintings that feature the picturesque Church of the Assumption on a tiny island in the center of the lake.

Day 9: Bled / Ljubljana / Depart
Our Balkan sojourn comes to an end this morning with a transfer to the airport in Slovenia’s nearby capital of Ljubljana.

Interested in extending your trip? Link it up with another adventure!
Repeater Layout : vertical
Plitvice Lakes National Park

Discover one of the world’s most enchanting karst landscapes, with 16 turquoise lakes linked by crystalline streams, cascading waterfalls and terraced pools.


Click here to see your trip details PDF. You should also receive it by email momentarily.
Ask a Question
Fill out the form below to receive additional information about our Wild Nature of Croatia & Slovenia or give us a call at 800-543-8917.
Download Trip Details
Receive our handy trip PDF by email and have everything you need at your fingertips, including highlights of the trip, itinerary, accommodations, and full details on dates, prices and logistics.


Click here to see your trip details PDF. You should also receive it by email momentarily.
/europe/croatia-slovenia-nature-travel/itinerary/
Physical Requirements