Fill out the form below to receive additional information about our Wild Croatia by Land & Sea or give us a call at 800-543-8917. 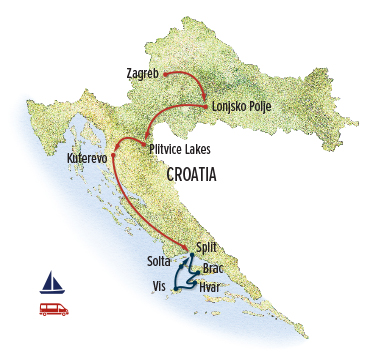 On arrival in Zagreb, you are met and transferred to our hotel in the center of this historic Balkan capital. With origins in Roman times, Zagreb flourished in the late 19th century as part of the Austro-Hungarian Empire, and many of its well-preserved yellow and peach buildings date to that era. Our hotel is optimally located for exploring Zagreb's main sights and monuments, and we begin with a welcome reception at 3:30 pm at the hotel, followed by a guided tour of the city and dinner in a traditional Croatian restaurant.

Day 2: Lonjsko Polje Nature Park / Plitvice Lakes
Leave the city behind as we drive to Lonjsko Polje Nature Park, the largest protected wetland in the Danube Basin. This 200-square-mile national reserve has been designated an Important Bird Area (IBA) by the European Union. The park, which includes extensive habitat along three major rivers, is the largest complex of native lowland riparian forest in Europe. Natural forces have shaped a distinctive landscape rich in biodiversity, with species specially adapted to the flooding that regularly occurs in this woodland habitat, including the renowned Slavonian Oak. The park also contains Krapje Dol, the first ornithological reserve in Croatia. On the oldest oxbow bend of the Sava River, we find nesting grounds for the Eurasian spoonbill, several species of heron, little bittern, ferruginous duck and short-toed snake eagle. Depending on seasonal migration patterns, we'll look for these or other birds on a walk with a local ornithologist. Continue this afternoon to Plitvice Lakes for a two-night stay.

Designated a World Heritage Site for its extraordinary natural features and undisturbed production of travertine, Plitvice Lakes National Park is one of the world’s most impressive karst landscapes. Contained by natural limestone dams, 16 turquoise lakes are linked by crystalline streams, cascading waterfalls and terraced pools—a dynamic environment with a soundscape as enchanting as its visual beauty. Park wildlife includes native trout, deer, wild boar, Eurasian lynx and 168 bird species. The park is especially noted for its 321 butterfly species, and we’ll hope to identify some as we follow the boardwalk trails that wind among the lakes and lush forest. The park also shelters some 50 highly endangered European brown bears, but they stay far away from paths and people.

Day 4: Kuterevo Bear Refuge / Split—Board Yacht
This morning we visit Kuterevo Bear Refuge, founded to protect orphaned and injured brown bears that cannot be returned to the wild. Located on the edge of Velebit National Park, the sanctuary offers a chance to get close to bears while learning from refuge staff about efforts to conserve these apex carnivores and their wild habitat. A thousand years ago, brown bears flourished throughout Europe. While widespread cutting of forests and hunting caused their numbers to plummet, Ursus arctos (the same species as the American grizzly) retains a viable presence on the continent, especially in the Balkans. Between 800 and 1,000 brown bears live in the mountains of Croatia, an important focus for bear conservation in Europe.

By late afternoon we reach Split on the Dalmatian Coast, with a guided tour of the city’s Old Town—a World Heritage Site—on arrival. Split’s richly layered history dates back 17 centuries to when the Roman Emperor Diocletian built his splendid palace on the Marjan Peninsula. We step inside to examine one of the most imposing and best-preserved Roman ruins in existence. The city grew up around the palace that remains at its heart, its labyrinthine streets bustling with bars, cafés, shops and open-air markets. In the harbor, our floating home for the next six nights awaits, the luxury wooden sailing yacht Fortuna.

Day 5: Brac—Sea Kayaking / Hvar
Greet the sun as we head out into the blue Adriatic. While we may sail under canvas at times, Fortuna's motor allows us to cruise efficiently no matter what the wind or sea conditions may be. Our first destination is Brac, the largest of the 1,186 islands that dot the Dalamatian coast. Brac is known for its native Mediterranean pine trees, secluded bays and laid-back atmosphere. Since ancient times, it has been renowned for its milky white limestone, used in the construction of Diocletian's palace, numerous buildings in Venice, and the White House in Washington, DC. Our Expedition Leader offers an introduction to sea kayaking as we get fitted to our boats and learn basic paddling skills in the calm teal waters. Following the shoreline, step ashore at Farska Bay to walk to Blaca Hermitage, a 16th-century monastery built below tall cliffs, and continue on foot to Blaca Bay, where we stop for a swim in the sparkling sea.

Then it's on to sun-drenched Hvar, a long, thin island dominated by a steep limestone ridge and covered with pines, heather and fragrant lavender. Ragged inlets indent the coast, adding to Hvar's striking beauty, and we'll explore more of it as we take to our kayaks after lunch on board. This evening, enjoy dinner at the home of a family that has lived on the island for generations, a farm-to-table feast featuring their garden's bounty.

Day 6: Exploring Hvar—Stari Grad / Hvar Town / Pakleni Islands
Discover more of Hvar by kayak as we paddle from Stari Grad to Hvar Town. Dating to the arrival of the ancient Greeks in 384 BC, Stari Grad is the oldest town in Croatia. It also boasts its own World Heritage Site, the Stari Grad Plain, an agricultural colony that has remained practically intact since it was first colonized by the Greeks in the 4th century B.C. The fertile plain was originally planted in grapes and olives, which have been cultivated continuously over 2,400 years to the present day. Later, we paddle and swim in the idyllic Pakleni Islands, a group of 14 wooded islets sheltering hidden beaches and quiet lagoons off the coast of Hvar Town. This evening, stroll medieval Hvar Town's central square, the largest in Dalmatia and paved entirely with marble. Other architectural gems include the 17th-century Venetian Arsenal and 15th-century Franciscan monastery with its ornate bell tower and 300-year-old cypress tree in the gardens overlooking the sea.

Day 7: Vis—Sea Kayaking & Exploring
This morning we continue to the island of Vis, inhabited for more than 5,000 years. Smaller and sleepier than neighboring Hvar, Vis is known for its bucolic atmosphere. Much of the landscape is green scrubland, with wild rosemary, capers and sage covering the rocky ground, along with vineyards and orchards of carob, olives, oranges and lemons. Vis holds a strategically significant spot in the Adriatic and was the target of many naval battles over the centuries. Greeks, Romans, Byzantines, Slavs, Venetians, Austrians, French and British have all controlled Vis at different times. After World War II, the island became a military base and is laced with tunnels built by the Yugoslav army. That history helped protect Vis from the impacts of tourism: When the rest of Croatia opened to visitors in the 1960s, Vis was off limits until 1998 and retains an under-the-radar status today. Our scenic kayak adventure starts at Stoncica Bay as we explore the island's south coast, passing tranquil coves and a striking 2-mile-long stretch of cliffs, then concludes in Komiza, a picturesque fishing village where we’ll have a chance to taste the day’s fresh catch.

Day 8: Bisevo—Sea Kayaking / Vis Town
Our paddling idyll continues at Bisevo, a tiny limestone island 3 miles southwest of Vis that has been inhabited since prehistoric times. A priest from Split founded a Benedictine monastery on Bisevo in 1050, but it was deserted two centuries later because of danger from marauding pirates. The 11th-century church of Saint Sylvester is preserved near the ruins of the monastery. Bisevo is most famous, however, for two caves: the Blue Cave, which is filled with an azure glow as a shaft of sunlight illumines the pure white sand on the sea floor, and Monk Seal Cave, which we explore by kayak. Continue paddling along the north coast of the island to reach the town of Vis. Dinner is at a local farmhouse where our host introduces us to peka, a famous Dalmatian dish of vegetables and meat or seafood—lamb and octopus are favorites—that are placed in a covered pot and roasted in the embers of an open fire.

Day 9: Solta—Sea Kayaking & Exploring
This morning, Fortuna moors near Solta for today's paddling excursion. This peaceful, wild island just 6 miles from Split is an undiscovered jewel for nature lovers. Our focus is the southern part of the island, with its tranquil bays, quiet beaches, cliffs, islets and reefs. The air on Solta is fresh and fragrant, with nearly 5,000 acres of intact Mediterranean brushlands—native trees, shrubs and grass—that offer a sense of what the land was like in ancient times. With vegetation blooming 10 months a year, Solta offers dozens of aromatic and medicinal plants for us to see and learn about. The small island, just 20 square miles, is home to more than 100 species of birds, including the endemic steppe eagle and small gray cuvita owl that is a symbol of Solta. The water around the island is impossibly clear, drawing Mediterranean monk seals that frequent only the cleanest parts of the Adriatic. If we're lucky, we might encounter some of the dolphins we also see occasionally along Solta's coast.

Day 10: Split / Depart
This morning, bid farewell to Fortuna, its crew and your Expedition Leader before boarding a shuttle for the Split airport to meet departing flights.


Click here to see your trip details PDF. You should also receive it by email momentarily.
Ask a Question
Fill out the form below to receive additional information about our Wild Croatia by Land & Sea or give us a call at 800-543-8917.
Download Trip Details
Receive our handy trip PDF by email and have everything you need at your fingertips, including highlights of the trip, itinerary, accommodations, and full details on dates, prices and logistics.


Click here to see your trip details PDF. You should also receive it by email momentarily.
/europe/croatia-sea-kayaking-adventure/itinerary/
Physical Requirements