Fill out the form below to receive additional information about our Aurora Quest: To the European Arctic by Luxury Train or give us a call at 800-543-8917.

Aurora Quest: To the European Arctic by Luxury Train 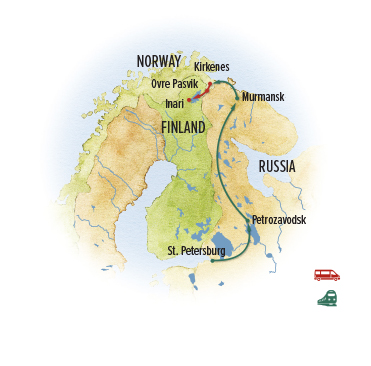 Day 1: St. Petersburg, Russia
Arrive at the airport in St. Petersburg and drive approximately one hour to our hotel in the heart of the city, which is a leading economic, scientific and cultural center of Russia. The Four Seasons Lion Palace offers a most elegant welcome, with opulent accommodations in a historic setting. Gather with our Expedition Leaders this evening for a welcome dinner and orientation to the slate of cultural highlights and northern nature adventures to come.

Day 2: Highlights of St. Petersburg
Please note: While the exact order and inclusions of our St. Petersburg city tour may vary slightly, a typical overview will include most of the following over Days 2 & 3.

Spend the next two days surveying the historic sights of St. Petersburg, founded by Tsar Peter the Great in 1703 on the site of a captured Swedish fortress on the Baltic Sea, in his quest to establish a strategic seaport. St. Petersburg set the stage for Russia's entry into modern history as a European great power, serving as the capital of Imperial Russia from 1712-1918. The Yusopov Palace on the Moika River is one of two surviving St. Petersburg residences of the monumentally wealthy Yusupov family. It is most famous as the scene of the assassination of Grigory Rasputin, and it is one of the few aristocratic homes in the city to have retained many of its original interiors. The Hermitage Museum is the second-largest art museum in the world, founded in 1764 by Empress Catherine the Great. Housed in the former Winter Palace of the Tsars, the royal art collection contains over 3 million works. We’ll also visit the Faberge Museum, housed in Shuvalov Palace, to view the exquisite collection of imperial Easter eggs. These masterpieces of jewelry art were created by artisans employed by the House of Faberge for the last two Russian emperors.

Day 3: St. Petersburg / Golden Eagle Private Luxury Train
More of St. Petersburg's iconic sights await today. Just around the corner from our hotel is St. Isaac’s Cathedral, the largest in Russia when it was completed in 1858 and still one of the most impressive landmarks of the imperial capital, with its gilded dome dominating the city skyline. Tour the Church of the Savior of Spilled Blood, the former Orthodox church that is now a museum and one of St. Petersburg's most-recognized landmarks. Its five onion domes are exuberantly decorated with colorful jewelers' enamel, while inside are 23,000 square feet of glittering mosaics, one of the largest collections in Europe. The cathedral's facades feature sculptures and massive columns made of single pieces of red granite, while the interior is adorned with intricate mosaic icons, paintings and columns made of malachite and lapis lazuli. We also visit the Peter and Paul Fortress, the original citadel of St. Petersburg founded by Peter the Great in 1703.

Early this evening, transfer to the railway station to board our private chartered train, the Golden Eagle, reserved exclusively for Nat Hab guests. The Arctic Explorer rail route will take us nearly 1,000 miles north to the top of Europe. A gala dinner is served in the elegant dining car, once we are settled into our cabins.

Day 4: Golden Eagle Train—Petrozavodsk
Through the Russian winter night, the Golden Eagle whisks us northward until we reach Petrozavodsk, where we disembark for a city tour. The city stretches along the western shore of Lake Onega, the second largest lake in Europe. Petrozavodsk is the one of the major cultural and industrial centers of northwest Russia and is the capital of the Republic of Karelia. Karelia more broadly is a distinct geographic and cultural region, encompassing territory and people in Finland and Sweden as well as Russia. A highlight of our visit is the Alexander Nevsky Cathedral, built in high classical style in the early 19th century. It was turned into a museum in 1929 following the Russian Revolution but returned to the diocese in 1991, fully restored, and consecrated in 2000. We'll also visit the Fine Arts Museum, renowned for its collection of Russian Orthodox icons and paintings (please note that on some days, the Fine Arts Museum may be closed, and an alternate activity will be substituted). This afternoon, enjoy a concert of Eastern Karelian folk music by the local kantele ensemble, featuring this traditional Finnish plucked-string wooden instrument. Back on board the train, enjoy Russian tea cakes in the Bar Lounge Car and a presentation by our Expedition Leaders as we continue our northbound journey.

Day 5: Golden Eagle Train—Murmansk
We reach Murmansk today, a city halfway between Moscow and the North Pole, which lies 120 miles north of the Arctic Circle. The main city on the Kola Peninsula, it began as a small Arctic trading post. In 1916, under pressure from the British government to establish a support port during World War I, Murmansk was founded, and we learn more about its history on a guided tour of the city. With the warming influence of the Gulf Stream, the port is ice-free year-round, and Murmansk is the home port of Russia’s nuclear-powered icebreaker ships. Depending on the day of the week, we will either take a guided tour of the Lenin Nuclear Icebreaker, which today is a museum, or visit the Naval Fleet Museum and drive by the icebreaker. First launched in 1957, this powerful vessel helped clear shipping routes in Russia’s northern reaches. Return to the Golden Eagle for one more night aboard, relaxing in refined comfort.

Day 6: Disembark Train / Kirkenes, Norway—Snowhotel / Aurora Search
This morning the Golden Eagle reaches its northern terminus in Nikel, near the Russia-Norway border, and we disembark the train at this point. After immigration formalities, we continue by bus to Kirkenes, Norway where the first of our Nordic outdoor adventures awaits: an exhilarating dog sled ride on the frozen fjord. Afterward, we head to the famous Snowhotel, built entirely of snow and ice. After lunch on the premises, we tour the hotel and stopping for a drink (served in glasses made of ice!) at the ice bar. And for those intrepid guests who are up for an adventure, you can spend the night at the Snowhotel, sleeping in warm thermal bags in a room carved of ice. Or opt for heated comfort at our regular hotel in town...the choice is yours. Regardless of where you stay, we gather this evening to search for the northern lights, often on view here at the top of Norway when skies are clear.

Day 7: Pasvik Valley / Kirkenes WWII Tour / Aurora Search
Spend the morning on an optional easy snowshoeing excursion through the peaceful Arctic landscape of Pasvikdalen, a long river valley wedged between Russia and Finland. This border region is a part of Pasvik–Inari Trilateral Park, a continuously protected wilderness area that consists of Ovre Pasvik National Park and Ovre Pasvik Landscape Protection Area in Norway, the joint Norwegian–Russian Pasvik Nature Reserve, and Vatsari Wilderness Area in Finland. We stop at the Svanhovd Environment Center, which hosts the visitor center for Ovre Pasvik National Park and a brown bear exhibit—the laboratory on site conducts important DNA research on brown bears. The Pasvik Valley is home to Norway's largest bear population, though of course they are hibernating when we are there. It also contains the largest remaining tract of primeval pine forest in Norway, an ecotone region where the eastern Siberian taiga meets western Boreal forest and Arctic tundra marshlands. This nexus of diverse habitats is an important bird area, with many eastern species that are rare elsewhere in Norway and Western Europe. The southern sector of the valley is an important grazing area for a large elk population in winter.

Return to town for lunch, then tour Kirkenes, with a focus on its World War II heritage. Kirkenes was the site of some of the most intense battles in the war on the German-Soviet front. We visit Andersgrotta, a bomb shelter in a cave in the center of town where the civilian population sought refuge during more than 300 bombings. After three years of heavy fighting in one of the coldest, bleakest theaters of battle, Kirkenes was liberated by the Red Army in 1944. After dinner, we set out once more in search of the northern lights, heading out of town to where the skies are darkest, hoping the aurora will make a dramatic appearance.

Day 8: Inari, Finland—Snowshoeing / Aurora Search
This morning we cross from Norway into Finland on our drive to Inari. This remote village 160 miles north of the Arctic Circle hugs the shores of vast Lake Inari in northern Finnish Lapland, a region dotted with thousands of lakes. The municipality of Inari is the hub of traditional Sami culture in Finland, and it recognizes four official languages – Finnish, plus three variations of Sami. From our base at Inari Wilderness Lodge, we are immersed in Sami life, learning about the history, customs and daily activities of Europe’s oldest culture and only indigenous people. After lunch on arrival, we head out on a snowshoe excursion to enjoy the winter landscape before twilight settles in. Later tonight we go in search of the northern lights once more. Our odds of seeing them here are among the best in Europe, when the weather is clear. In northern Finland, the aurora is on display about 200 days a year.

Day 9: Sami Culture—Siida Museum & Reindeer Farm / Aurora Search
Learn all about Sami culture today, beginning with a tour of the Siida Museum and Nature Center in Inari. Permanent exhibits and photographic displays showcase the rich and varied history of the Sami people and their role in modern-day Lapland. Observe Sami architecture in the open-air museum where a trail takes visitors past some 50 buildings and structures grouped by cultural area. The museum shop also sells handmade Sami crafts to take home as gifts or souvenirs. After lunch, visit a local reindeer farm to learn about the important place of this domestic animal in Sami culture. We’ll meet the herder and even take a short ride in a sled pulled by a reindeer! Our farewell dinner this evening is a festive event: a local Lappish meal with a Sami cultural presentation. Learn about Sami heritage, view colorful Sami costumes, and enjoy traditional Lappish foods and delicacies. Afterward, we have one last chance to seek the northern lights in the Arctic sky.

Day 10: Inari / Ivalo—Depart
Depart Inari this morning on a 45-minute transfer to the airport in Ivalo. From Ivalo, fly to Helsinki to connect with onward flights.


Click here to see your trip details PDF. You should also receive it by email momentarily.
Ask a Question
Fill out the form below to receive additional information about our Aurora Quest: To the European Arctic by Luxury Train or give us a call at 800-543-8917.
Download Trip Details
Receive our handy trip PDF by email and have everything you need at your fingertips, including highlights of the trip, itinerary, accommodations, and full details on dates, prices and logistics.


Click here to see your trip details PDF. You should also receive it by email momentarily.
/europe/arctic-winter-russia-train-trip/itinerary/north-russia-finland/
Physical Requirements