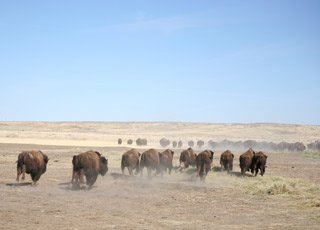 More than 100 years ago, Marcia Pablo’s great-great grandfather, Michel, a member of the Confederated Salish and Kootenai tribes, was forced to sell his herd of more than 600 bison when the Flathead Reservation was opened to homesteaders. The Canadian government was the only buyer and, over the course of six years, Michel transferred the bison by rail to Elk Island National Park near Edmonton, Alberta.

The young calves are descendants of the last bison that called this area home more than 100 years ago. With their release, these calves came home to a land they’ve never known, but a land to which they will bring new life.

On March 8, 30 people, including WWF staff, met in an unassuming metal barn that was transformed to a place of celebration. In the group were members of the White Clay tribe from the Fort Belknap reservation, WWF and APR staff, local ranchers, supporters and Marcia Pablo and her family.Joining Marcia on this day was her sister Marlene, cousin Leonard Gray, and two grandchildren—Michel Pablo’s seventh generation—who brought a ceremonial blanket. Presenting the blanket as a gift, Marcia said: “The circle is a sacred symbol for us, and the circle is finally closed. The buffalo are home.”

And then it was time for the main event. The group moved outside to the round corral where 71 young bison were waiting to join the herd. The corral was opened and the first gang charged out, then a few more, and a few more. With each group a woman from Fort Belknap honored them with a powerful, high whooping cry.

As the last of new calves joined the herd, they were quickly surrounded by mother bison. Welcomed. Safe.

WWF works to provide bison freedom to roam because we know they can once again assume their keystone role in the region. We collaborate with native tribes to establish and grow herds on sacred lands and work with the American Prairie Reserve to bring bison to the northern Montana prairie.

Photo © WWF: The last of the bison return to the prairie.
Conservation