Swimming with Sharks, Lessening the Impacts 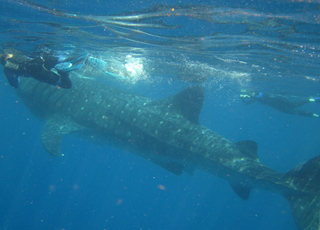 Gentle giants. That’s what pops into my head each time I think about being in the water, swimming alongside a whale shark. The first time I did it, it was the experience of a lifetime: Swimming six feet away from one of these gargantuan creatures, looking directly into his eye, kicking with all my might to keep up with him as he skimmed the surface of the plankton-rich water with his mouth wide open. I’m not sure what it is about being so near a creature so large; on the one hand, thrilling, and on the other hand, a palpable sense of calm.

When I returned this past summer, I had the chance to swim with a “youngster” – only about 15 feet long; much easier to keep up with. We also had the special treat of spotting several large schools of golden rays, glittering as the sun bounced off them on the swells WWF got involved with the small fishing community of Holbox on the northern coast of the Yucutan Peninsula about five years ago when the region began its transformation from a shark-fishing village to a premier whale shark watching destination. When the shark fisheries began to decline, the fishermen started taking tourists out to see the whale sharks and asked WWF for help developing a code of conduct for the swim-with-a-whale outings. Some of the guides were letting people ride the sharks and—no surprise—the sharks were making themselves scarce.

With the help of experts—and from learning about whale shark watching experiences in Belize, Honduras and Australia—the fishermen drew up a list of practices that would constitute a high-quality experience for the guests with less impact on the sharks.

At issue now is the competition from less conscientious operators from Cancún and beyond. WWF conducted an analysis of the business model used by the local operators, with the goal of keeping the shark-watching business healthy as an incentive for protecting the whale sharks and their habitat. We’re also interested in learning more about the whale sharks’ habits, and so we’ve been working closely with Mexico’s National Park agency and have provided funding for satellite tags to track the movements of the sharks, which will help identify habitat in need of additional protection. Two of the sharks are now outfitted with the tags and the researchers have begun tracking them.
Conservation