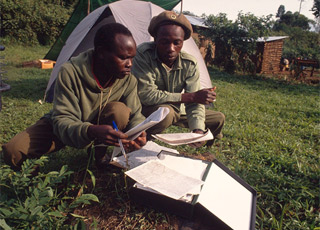 This exciting news brings hope for the future of mountain gorillas as these critically endangered animals live only in two places on Earth—Bwindi and the Virunga Massif area, which spans across parts of Democratic Republic of the Congo, Uganda and Rwanda. According to the census, both habitat locations demonstrated positive trends in population growth over the last decade.

“Although they face many threats—habitat loss, disease, and snare entanglement, among others—this subspecies of the eastern gorilla can have a future on this planet,” says Matt Lewis, WWF’s African species expert. “And by protecting mountain gorillas, we ensure the survival of vital gorilla habitat and the other species that live there too.”

While the future is looking brighter, the prospect of oil exploration in Democratic Republic of the Congo’s Virunga National Park by petroleum companies is cause for concern. While oil drilling would not occur directly in gorilla habitat, industrial activity would compromise the integrity of Virunga National Park, Africa’s first national park and a UNESCO World Heritage Site. An influx of workers and heavy equipment could greatly threaten the park’s prized biodiversity, which also includes elephants, hippos and the rare okapi antelope.

Virunga National Park is home to more than half of the world’s mountain gorilla population. When refugees and displaced people encroached upon park land to flee a war zone, WWF and the United Nations purchased emergency fuel wood supplies so that the people were less likely to look to the park as a fuel source. And as the park recovers from civil unrest, WWF has worked to reforest areas and fund antipoaching patrols. WWF has also collaborated with the local people to raise environmental awareness and improve the management of natural resources outside the park.