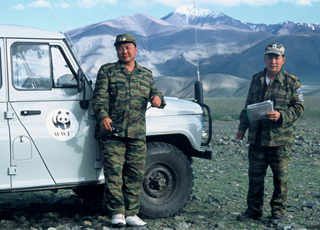 For the endangered animals of our planet—like the rare and regal snow leopard—climate change means much more than hotter days and intensified storms. These creatures face the prospect of a significant transformation of the habitats that sustain them.

WWF has raised concerns about the possible impact of global climate change on snow leopard habitat. The elusive, solitary cat—with an estimated population between 4,000 and 6,500 individuals— lives across a vast area of northern and central Asia, including the Himalayan Mountains. In the Himalayas, snow leopards live in high alpine areas above treeline and generally below 16,000 feet, where they stealthily track their prey.

A WWF study used on-the-ground tracking efforts in high elevation areas and computer modeling to determine the impacts of various warming scenarios on the Himalayan portion of the snow leopard range. Warming at high elevations in the Himalayas is already occurring at rates greater than the global average.

The study’s results have raised concerns about how climate change may affect snow leopards. If greenhouse gas emissions continue to increase steadily, 30 percent of snow leopard habitat in those mountains may be lost to treeline shift. Even relatively low future emissions could mean a loss of as much as 10 percent of existing habitat, the study concluded. Increasing fragmentation of alpine areas may separate populations of snow leopards, leading to isolation that could threaten their viability.

Rigorous monitoring by WWF and its partners remains an essential element of an effective conservation plan for snow leopards, enabling us to respond to the emerging effects of climate on snow leopards and minimize other threats to their continued survival.

Making strategic, research-based choices in our work to benefit snow leopards will help us develop effective conservation solutions. Data and maps like those generated by this WWF research are some of the most powerful tools we have to ensure the future of these magnificent, threatened cats.