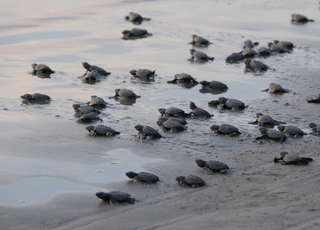 Twenty-six children lined up to present Mexico’s then-president Felipe Calderon with a 13,000-signature petition on behalf of WWF. Their presence was the capstone to a months-long effort – one that included a public campaign, outreach to investors, and government relations – to save one of Mexico’s great treasures, Cabo Pulmo National Park.

The petition’s request was specific and simple: Deny the permit for Cabo Cortes, a proposed resort with thousands of hotel rooms and condos, multiple marins, and gold courses. The resort would have sent runoff and other pollution into the Gulf of California, a 900-mile swath of ocean that shelters more than 6,000 marine species, including endangered marine turtles, and sustains thousands of local people. As always, we had scientific evidence in our camp: Since the park was established in 1995, the amount of fish in Cabo Pulmo had increased more than 460 percent.

In June, President Calderon canceled plans for the resort, demonstrating Mexico’s commitment to sustaining its natural resources for people and wildlife.

"It is clear that President Calderón weighed the conclusive scientific evidence showing that this mega project would not only affect the Cabo Pulmo Marine Park, but also other ecosystems in the Gulf of California. His decision sends a clear message that this is not the kind of tourism model that we want for Mexico”, said Omar Vidal, Director General of WWF-Mexico. “Cabo Pulmo is so fragile that it can only tolerate low-density tourism development with minimal impacts on the marine park and surrounding areas, in line with what the local community is already doing”, he added.

The Gulf of California stretches over 900 miles and supports an extraordinary diversity of marine life, including many species of reef fish, sharks, whales, marine turtles, and the vaquita, the world’s smallest porpoise. The Gulf of California is Mexico’s most important fisheries region with commercial species of shrimp, sardine and giant squid. It is also important for sport fishing of billfishes and tuna.

WWF works to ensure that the Gulf remains a healthy and productive marine area that can support local communities as well as the abundant wildlife within and near its waters.