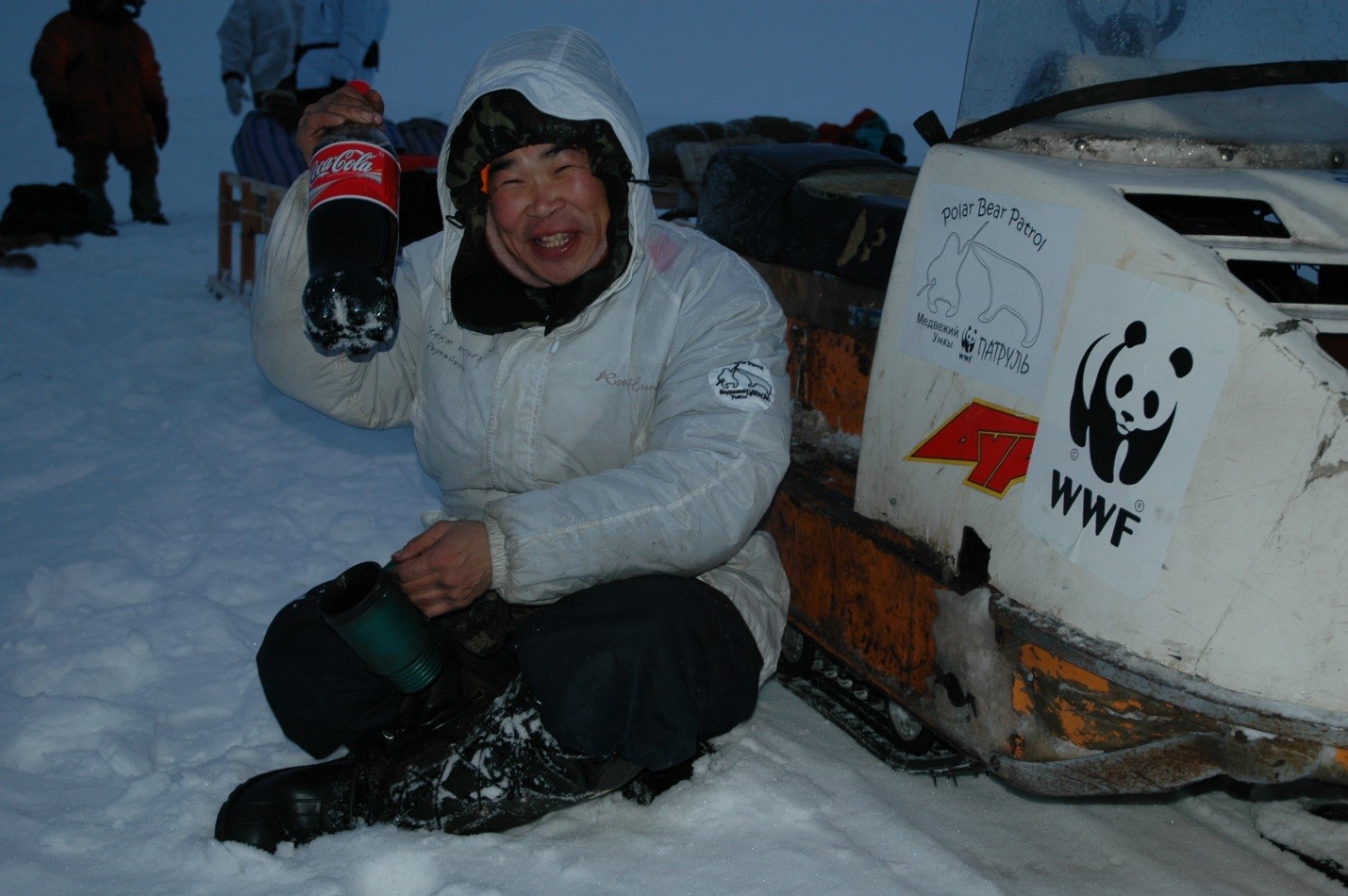 The boat is moving so slowly and in calm waters as I take my watch with Anders. Ryrkaipiy is in sight, but it is still dark and too early to approach, so we reduce speed to a mere 2 knots and make a very gradual arrival. From a distance we begin to see the telltale signs of a former military base- abandoned structures and debris. In the middle of this, however, are what appear to be well-maintained and colorfully painted buildings.

The sunrise reveals a beautiful landscape surrounding the settlement. The Chukchi Mountains stretch out to the west, some with snow covered peaks. Rolling hills surround the town and Cape Schmidt is virtually an island connected only by a thin gravel strip. The island is rocky and dramatic compared to the relatively flat landscapes seen thus far.

On the shores of the rocky headlands and stretching out into the ocean we can see brown bodies jostling for beach space and heads bobbing in the sea. The hundreds of walrus we saw initially were only an appetizer too as we can now see thousands including a brown carpet stretching far up the south facing hill.

To top it off, we have one polar bear in sight of the boat too! It appears to be feeding on a walrus carcass, of which there are plenty, and is a quite healthy looking male. I have never seen such an abundance of wildlife in one place at one time.

This is a special visit for me as it is the home of Vladilen Kavriy, the father and driving force behind the Umky Patrol. The Umky Patrol was born out of tragedy. In 2005, a young girl was killed by a polar bear in this village. In response the town decided to take actions to prevent this from happening again.

In coordination and with support from WWF, the Umky Patrol now works to reduce bear human conflict in several villages across the Russian Arctic, manage attractants around towns, educate the public on safety around bears and walrus, minimize disturbance to walrus haul outs, and guard against poaching.

The activities of the patrol members, especially their outreach efforts within their communities, has also led to grass roots conservation in the designation of new protected areas for recently formed and existing walrus haul outs. Something I would love to see happen more frequently in other parts of the Arctic – community-led conservation.

The reason for this Northwest Passage expedition is to solve a scientific mystery: Are walrus and polar bear populations in the Laptev related to populations to the east and west?

Russia's Arctic coast has lost much of its summer sea ice over the past two decades.

As a result, there's increased interest in shipping routes and oil and gas exploration in the Laptev Sea.

Solving this mystery will have implications for the management of the entire region.