WWF in Action: Republic of Georgia

In Caucasus, All Eyes on an Elusive Big Cat 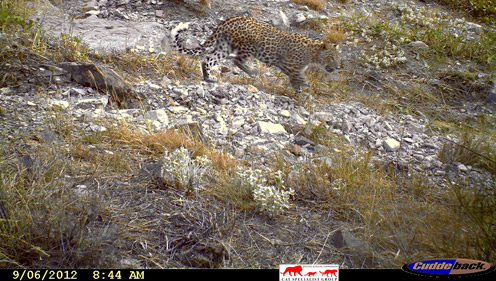 It was barely distinguishable from the rocky landscape surrounding it: A rugged Caucasian leopard swiftly descending a boulder-strewn mountain. Photographed close up, you wonder how a spotted big cat could possibly blend in with its environment.

But examine a camera trap image of this rarest of species in the Caucasus region, and you see how expertly its stunning patterned fur helps camouflage it.

WWF captured images of the species—also referred to as the Persian leopard—in the Zangezur National Park in neighboring Azerbaijan. The cameras also captured photos of the leopard’s prey, helping scientists from WWF and local partner agencies learn more about its habits and threats.

A leopard had not been seen in the region for many years, causing excitement among the local scientific community that the female might be able to help repopulate Caucasus.

Meanwhile, there are four leopards living in Sochi National Park, thanks to support from WWF-Russia and Russian officials. They’re part of a breeding program, with the goal of repopulating North Caucasus with leopards. The release of the leopards’ kittens will take several years, as the captive animals learn to adjust to life in the wild through a precisely thought out adaption process.

With cooperation from the governments of the Republic of Georgia, plus Armenia, Russia and Azerbaijan, WWF will continue to assess the status of the Caucasian leopard, hopefully elevating its protection to national priority levels, as the stunning and elusive creature deserves.