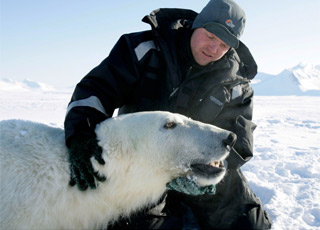 Between the ash-colored sky, misty rain and snow-covered shoreline, I struggled to make out the polar bears that our captain insisted were straight ahead of us. No matter how much I strained, toggling between binoculars and naked eye, all I observed was thick, milky nothingness.

But as our small boat slowly motored in the choppy water along Edgeøya—an uninhabited island in the high Arctic of Svalbard, Norway—three hulking forms suddenly appeared. One polar bear was walking away and disappeared into the mist almost as quickly as it had appeared. Another bear was curled up asleep.

And a third bear was right there - right there! How could I not see her? And this encounter was special; the bear was wearing a satellite radio collar.

Of the 20,000 to 25,000 polar bears left in nature, only a handful are tracked by scientists in this manner. Finding her was a rare and random moment in the wild. Once we returned to the expedition ship, I went online immediately so I could follow her on WWF’s Polar Bear Tracker.

Izzy is the name researchers at the WWF-supported Norwegian Polar Institute gave to this particular bear. She was six years old, found 15 months earlier with a male cub close to where I observed her. In fact, Izzy never strayed far, as I learned tracking her online. She kept to a range nearly 1,400 square miles—tiny for wanderlust-filled polar bears, but not unheard of.

For many years, WWF has run a polar bear tracker, using data from WWF-supported researcher teams to track some of the animals by satellite. By tracking these bears, scientists can map a polar bear's range and examine how habitat use may change over time in response to changes in the sea ice. WWF and partners are working to understand the impact that different threats, such as climate change and the expansion of industry in the Arctic, are having on different polar bear populations.

Eventually, Izzy stopped showing up on the Polar Bear Tracker. Her satellite collar may have fallen off, or the sensitive electronics embedded within may have petered out. That happens frequently enough.

I still go onto the Polar Bear Tracker from time to time, hoping Izzy shows up again. She could still be out there, in the thick, milky nothingness.

Get Weekly Updates
Our weekly eNewsletter highlights new adventures, exclusive offers, webinars, nature news, travel ideas, photography tips and more.
Request Your 2022-23 Catalog
View Our 2022 Digital Catalog
Send Us a Message
Use the form below to send us a comment or question.
Refer a Friend
Earn rewards for referring your friends! We'd like to thank our loyal travelers for spreading the word. Share your friend's address so we can send a catalog, and if your friend takes a trip as a first-time Nat Hab traveler, you'll receive a $250 Nat Hab gift card you can use toward a future trip or the purchase of Nat Hab gear. To refer a friend, just complete the form below or call us at 800-543-8917. It's that easy! See rules and fine print here
/conservation/wwf/wwf-in-action/norway/
Physical Requirements