Milena and the Maui's 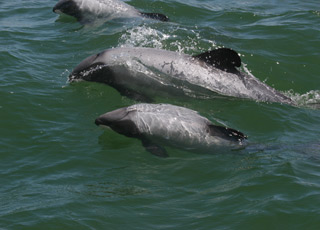 “For the calf to survive without its mother, it needs lots of help,” said Milena Palka, WWF Marine Species Advocate.

Help. If you’ve followed any of the news about New Zealand’s dolphins in recent years, you will have noticed the word cropping up with alarming regularity.

Just as the bottlenose calf will need help if it is ever to survive in the wild, so too do New Zealand’s other dolphin species. Of these, our precious and critically endangered Maui’s dolphins need it the most. There are estimated to be just 55 left.

Maui’s dolphins are tiny, rarely reaching lengths over five feet, and fast. Only rivaled in size by the vaquita, a porpoise in the Gulf of California, they are considered the smallest marine dolphin in the world. Maui’s are found along the North Island’s western shores and are a subspecies of Hector’s dolphins, which are found on New Zealand’s South Island.

“We’ve known for over 30 years that Maui’s and Hector’s dolphins are at risk from net fishing,” Milena said.

Shortly after the introduction of fine nylon mesh gillnets in the late 1960s, dolphins began washing up on the beaches in noticeable numbers. Despite this, the government didn’t act. Scientists had also raised concerns that the Maui’s population was being depleted at an unsustainable rate. It wasn’t until 2003 that protection measures for Maui’s were finally initiated.

WWF works with young people in schools and with local communities especially in coastal areas to educate and raise environmental awareness.

WWF also works with politicians, lobbying government for greater protection, and engaging with the fishing industry where possible to find solutions that will benefit dolphins and fishermen alike.