New Technology to Stop Poachers in their Tracks 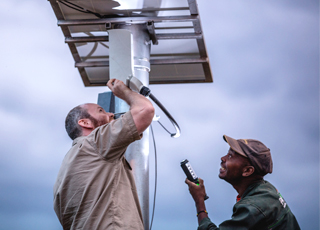 To help prevent illegal poaching activity in Kenya, WWF used a grant from Google.org to engineer a remarkable new thermal and infrared camera and software system that can identify poachers from afar and alert park rangers of their presence.

This is the first time that infrared cameras and human recognition software have been used to monitor a park’s boundary for conservation and anti-poaching efforts. WWF designed and installed two systems to identify poachers with infrared cameras: stationary poles lining the border of a park, and a mobile unit atop a truck used by rangers.

The thermal cameras come from the company FLIR and pick up heat emitted by people and animals as they cross their viewpoint. The accompanying software determines whether that heat comes from a human. If a human is identified, the computer sends an alert to the head warden, who then deploys a quick response ranger unit to intercept the intruder. Eric Becker, WWF’s conservation engineer, developed the system from concept to reality.

“We know this will be a groundbreaking solution to stop poaching and keep rhinos and other wildlife safe,” said Colby Loucks, WWF’s director of the Wildlife Crime Technology Project. “This system will peel back the layer of night to assist the brave rangers protect wildlife and help keep them safe.”

WWF worked with the Kenya Wildlife Service to design and install the stationary solar-powered system to permanently keep watch on nearly five miles of border road. We mounted the mobile version in another park—Kenya’s Maasai Mara National Reserve working with the Mara Conservancy—where it compliments existing anti-poaching operations, including ranger foot patrols and a sniffer dog team.