Linking the Mekong to Regional Economy 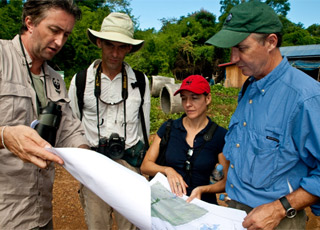 WWF President and CEO Carter Roberts joined Secretary of State Hilary Clinton; the foreign ministers of Laos, Vietnam, Cambodia, Thailand, and Myanmar; the Asian Development Bank; and many others to outline a vision for the future of an economically and environmentally healthy Mekong region.

The Greater Mekong spans over 200 million acres—the combined size of Texas and Arkansas—across six countries and contains some of the most biologically diverse habitats in the world. The Mekong is the richest river basin, by area, for fish biodiversity on the planet, fostering three times more fish species per catchment unit area than even the Amazon River. As the world's largest inland fishery, the river provides 25% of the world’s freshwater catch—worth up to 7 billion dollars annually.

Secretary Clinton accurately described the Mekong River as a miracle. It sustains life and livelihoods—directly or indirectly—for hundreds of millions of people. But unprecedented economic and social development threatens the health of the Mekong, as does its particular vulnerability to climate change, making conservation work here especially important.

In that meeting, Roberts drew on WWF’s experience and success in the region. He described multiple WWF-led studies on the region’s wildlife and the impact of development plans, and discussed our joint effort with The Coca-Cola Company to help communities in Vietnam make a living while restoring Tram Chim National Park’s natural, historical conditions. Roberts also spoke of our partnership with Buddhist leaders to reinforce environmental beliefs and the strategic advice we have provided to establish smart, sustainable infrastructure planning across the region.

WWF’s position came through loud and clear: The region’s incredible biodiversity, which supports millions of people and provides 25 percent of the world’s freshwater fish catch, can be a central part of a regional economy that manages the demands of human needs through making sustainable use of the benefits nature provides.

Get Weekly Updates
Our weekly eNewsletter highlights new adventures, exclusive offers, webinars, nature news, travel ideas, photography tips and more.
Request Your 2022-23 Catalog
View Our 2022 Digital Catalog
Send Us a Message
Use the form below to send us a comment or question.
Refer a Friend
Earn rewards for referring your friends! We'd like to thank our loyal travelers for spreading the word. Share your friend's address so we can send a catalog, and if your friend takes a trip as a first-time Nat Hab traveler, you'll receive a $250 Nat Hab gift card you can use toward a future trip or the purchase of Nat Hab gear. To refer a friend, just complete the form below or call us at 800-543-8917. It's that easy! See rules and fine print here
/conservation/wwf/wwf-in-action/indochina/
Physical Requirements