How Nations are Uniting to Double the World's Tigers 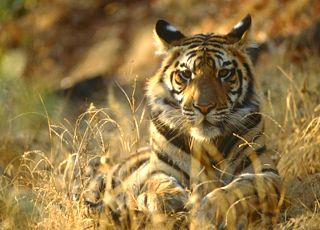 Ninety-seven percent. In the last 100 years, tiger populations have declined that dramatically, from 100,000 to as few as 3,200 in the wild. And it’s humans—through rampant poaching and habitat destruction—who are driving these big cats to extinction.

Bringing tigers back from the brink takes commitment on a global scale. Faced with this challenge, tiger range countries took a stand and set an ambitious species conservation goal: double the number of wild tigers by 2022—the next Year of the Tiger. The goal is called Tx2.

Saving tigers is about more than restoring a single species. As a large predator, tigers play an important role in maintaining a healthy ecosystem. Every time we protect a tiger, we protect around 25,000 acres of forest—forests that sustain wildlife and local communities and supply people around the world with clean air, water, food, and products. By saving tigers, we show the world that conservation and development can go hand in hand. Tx2 is a model of conservation for other species too. And it protects natural resources, contributing to a positive future for people, for wildlife, and the planet.

In 2010, the governments of the world’s 13 tiger range countries gathered and created the Global Tiger Recovery Plan, outlining how each country could reach the Tx2 target. Species and conservation experts, including WWF, played a key role in developing the plan and continue to ensure it is put into practice. With governments, scientists, rangers, communities, and others, we are working to ensure tiger conservation is given the priority and investment it requires.

Over the last century, tigers have also faced massive habitat loss. But we know that given adequate space, prey, and protection, wild tiger populations can increase. Habitats for a strong tiger population—with optimal conditions for tigers to breed and thrive—have now been identified and are the focus of Tx2 efforts.

In order to measure progress toward our goal, tiger range countries must survey their tiger populations. In India, the population of wild tigers in the country increased to 2,226 in 2014 from 1,706 in 2010 (and only 1,411 in 2006). This growth is largely due to better management and improved protection.

Working with governments, communities, and other organizations, WWF is building a future in which tigers can thrive. Our efforts include training rangers, tackling the illegal wildlife trade, and developing conservation standards and technology to achieve zero poaching. Together we can help tigers rebound and continue to increase in number, by 2022 and beyond.