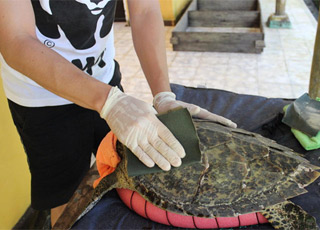 Marine turtles spend most of their time in the ocean, only coming to shore to nest – that we know. Yet we still know very little about the migration patterns of sea turtles. Satellite tracking is one way of filling that knowledge gap, allowing researchers to track marine turtles as they swim from place to place.

WWF places satellite tags on marine turtles in many areas around the world. The information collected from the tags helps us to design better management strategies for their conservation, such as creating marine protected areas for important feeding areas or addressing threats to nesting beaches. Knowledge of marine turtle migration pathways is also important to reduce interaction with fisheries, when turtles too often become victims of bycatch.

Satellite tracking involves attaching a special piece of equipment to a marine turtle’s shell. The transmitter, or “tag,” sends a message to a satellite each time the turtle comes to the surface to breathe. We then know the location of the turtle and plot it onto a map.

When a turtle is captured for tagging, it is brought back to the laboratory where general data, such as the turtle’s size, is collected and recorded. Sometimes a turtle already has an identification tag; recapturing a turtle like this provides important information on turtle habits as well.

Before researchers can attach the tag, they must prepare the turtle's shell. First all algae and attached organisms are removed. Once the shell is dry, then the transmitter attachment site is selected and safely rubbed with sand paper to create a smooth adhesion area. Acetone is wiped over the area to create a clean surface.

Turtles are sometimes released in a different spots than their capture points. WWF uses this strategy to test, for example, whether hawksbills have reef fidelity, meaning they always return to the same place and stay there.

Get Weekly Updates
Our weekly eNewsletter highlights new adventures, exclusive offers, webinars, nature news, travel ideas, photography tips and more.
Request Your 2022-23 Catalog
View Our 2022 Digital Catalog
Send Us a Message
Use the form below to send us a comment or question.
Refer a Friend
Earn rewards for referring your friends! We'd like to thank our loyal travelers for spreading the word. Share your friend's address so we can send a catalog, and if your friend takes a trip as a first-time Nat Hab traveler, you'll receive a $250 Nat Hab gift card you can use toward a future trip or the purchase of Nat Hab gear. To refer a friend, just complete the form below or call us at 800-543-8917. It's that easy! See rules and fine print here
/conservation/wwf/wwf-in-action/hawaii/
Physical Requirements