Tracking the Unicorns of the Sea 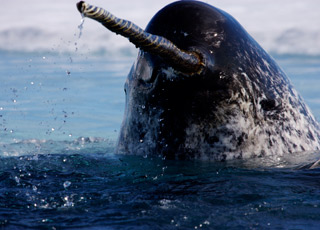 In the icy waters off the coast of Greenland, a fantastical creature roams the waters. And WWF is tracking it.

WWF supports a project to track narwhals. The narwhal looks like a cross between a whale and a unicorn with its long, spiraled tusk jutting from its head.

Whales, like narwhals, are at the top of the food chain and have an important role in the overall health of the marine environment. Narwhals are also culturally important to indigenous communities in the Arctic. Like the polar bear, the narwhal depends on sea ice for its existence and can be directly impacted by climate change.

WWF fit the little-researched whales with satellite tracking devices. A web page showcases the fieldwork and research, with maps and information about the latest movements of the narwhals as they move around Baffin Bay in Canada’s Nunavut territory, between the coasts of Canada and Greenland.

Pete Ewins, Arctic species specialist for WWF-Canada, said that it is expected the project will contribute fascinating information about the habits of narwhals.

“It is a chance to better understand these animals while their world changes around them,” Ewins said. “We know narwhals are often associated with sea ice, and we know the sea ice is shrinking. WWF is trying to understand how narwhals, as well as all other ice associated animals in the arctic, can adapt to a changing environment. We can put this knowledge together with existing Inuit knowledge, and we can work with Inuit and other stakeholders to help the animals survive the coming changes.”

Satellite tags allow researchers to follow the movements of narwhals during their annual feeding and reproductive routines.

Get Weekly Updates
Our weekly eNewsletter highlights new adventures, exclusive offers, webinars, nature news, travel ideas, photography tips and more.
Request Your 2022-23 Catalog
View Our 2022 Digital Catalog
Send Us a Message
Use the form below to send us a comment or question.
Refer a Friend
Earn rewards for referring your friends! We'd like to thank our loyal travelers for spreading the word. Share your friend's address so we can send a catalog, and if your friend takes a trip as a first-time Nat Hab traveler, you'll receive a $250 Nat Hab gift card you can use toward a future trip or the purchase of Nat Hab gear. To refer a friend, just complete the form below or call us at 800-543-8917. It's that easy! See rules and fine print here
/conservation/wwf/wwf-in-action/greenland/
Physical Requirements