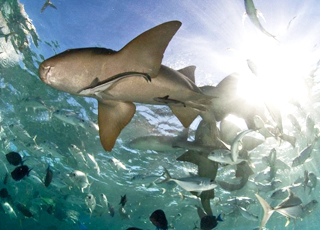 The coral reefs and coastal mangroves of Belize teem with life: sea turtles glide through clear waters, vibrant corals stud the ocean floor, and a vast array of aquatic animals protect their young in the tangled roots of mangroves. These habitats sustain both the wildlife that lives there and the people who rely on the reef for income and storm surge protection.

But ecosystems in the Belize Barrier Reef Reserve System have already been damaged by coastal construction, and potential oil drilling poses a major threat. These harmful industrial activities would impact Belize’s economy, natural resources and the 1,400 species that live in the reef system.

“Coral reefs are the cornerstone of some of the most biologically diverse ecosystems on the planet, and they provide loads of benefits to people,” said Brad Ack, WWF’s senior vice president for oceans. “Conserving reefs our common futures and the amazing marine species that depend on them.”

“Conserving the environment does not hurt economic opportunities,” said Roberto Troya, WWF’s director for Latin America and the Caribbean. “It allows us to build sustainably on these irreplaceable assets. Threats to World Heritage sites in places as diverse as Belize, Spain and Tanzania demonstrate how widespread the risks run and should unite us in our effort to protect these essential areas.”

Nearly 200,000 Belizeans are estimated to rely on the reef for survival. And 15 percent of the country’s gross domestic product comes from the reef—including about $15 million from the commercial fishing industry and about $200 million from tourism activities. This natural barrier also saves Belize up to $350 million per year in avoided damage from storms and other natural disasters.