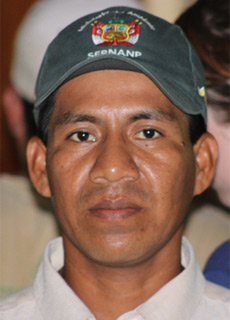 Tulio Ahuanari Sima remembers the size of the paiche his fisherman grandfather used to bring home after a day on the river: The tasty and dense Amazonian fish could grow to 11 feet and was so heavy that two or three men were needed to carry just one. A single fish fed several families.

As he grew up, Ahuanari said he started observing smaller and smaller fish—sometimes by several feet. “I was worried,” Ahuanari said. “I wanted to know what was causing this.”
The desire to protect a fish so important to his community—a species once drastically overfished in the Amazon Basin—inspired the 30-year-old to get involved in conservation. Today, he is the head of Ranger Station No. 2 in the largest protected area in Peru. The small, shy man commands a team of three and oversees volunteers from villages and towns in and around the Pacaya Samiria National Reserve, which WWF supported when it was founded in 1982. (Travelers on WWF’s Amazon Voyage have the pleasure of visiting the ranger station during the expedition.)

Ahuanari studied tourism and natural history. Three years after landing a much-coveted job at the reserve, he was promoted to station leader.

“It was an important opportunity to work here and learn about the reserve,” he said during a brief meeting at the station headquarters—an unusual Japanese-style edifice built by 1970s researchers who traveled along the Pacaya River to examine the very topic that inspired Ahuanari’s career.

Ahuanari and his team live in the building for weeks at a time, monitoring howler monkey populations by day and caimans at night, among other wildlife censuses. They collect yellow-spotted water turtle eggs and relocate them to the beaches near the station so they can be protected as they hatch.

And Ahuanari patrols the Pacaya River and its tributaries for poachers. At 5 million acres, it’s a lot of territory for just four men to cover, so the military assists. Residents of the 208 communities in and around the reserve do, too; in exchange they’re allowed to fish in sustainable quantities. This will ensure flourishing populations of fish for the sake of the rivers and, perhaps one day, for Ahuanari’s grandchildren, too.