Fill out the form below to receive additional information about our Ultimate Baja Whale Expedition or give us a call at 800-543-8917. 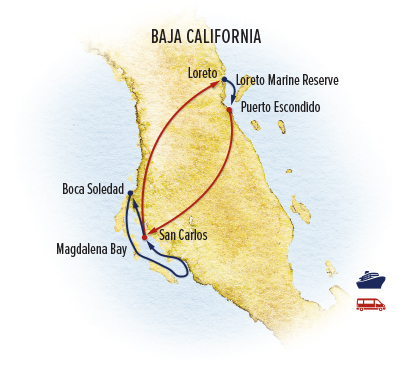 Day 1: Loreto, Mexico
Our whale-watching expedition begins in Loreto, a tranquil town on the Sea of Cortez. Make the short transfer from the airport to our hotel located opposite the marina in the oldest permanent settlement on the Baja Peninsula. Colonial Loreto was founded by the Spanish in 1697, the site of the region's first Jesuit mission in Baja California. Join our Expedition Leaders for a welcome dinner this evening, with a preview of the adventures to come.

Day 2: Blue Whale Search in Loreto Marine Reserve / San Carlos—Embark Ship
After an early breakfast, walk to the marina in front of our hotel to embark on a small-boat excursion in search of blue whales. These cetaceans are Earth's largest animals, and during a few fleeting weeks each year, this local population veers off the deep ocean trenches of the Eastern Pacific to enter the Sea of Cortez where they mate, calve and feed on krill in the waters of the Loreto Marine Reserve. Blue whales were nearly extinct before they were given global protection in the 1950s. While still endangered, there are now thought to be 12,000–14,000 blue whales plying the world's oceans, and Mexico takes their protection seriously. Watch for their spouts and telltale flukes: these 100-ton giants exude several columnar blows reaching 22 feet into the air each time they surface to breathe, and they often lift their huge tail flukes high as they submerge once again.
After lunch on the beach, we drive west across the Baja Peninsula to Magdalena Bay on the Pacific coast. This scenic 2.5-hour transfer spans the rugged Sierra de la Giganta Mountains, winding through rocky arroyos and saguaro forest en route to the port city of San Carlos. Early this evening, board the National Geographic Sea Bird, our floating base that offers mobile access to this rich coastal ecosystem of protected lagoons, mangroves, sand dunes and pristine beaches. The expedition ship's nimble design allows us to enter shallow waters where whales give birth and offers access to wild islands unmarred by tourism development.

Day 3: Boca Soledad—Gray Whale Watching
Our focus for the next four days is the greater Magdalena Bay region—some of the world's best environs for gray whale watching. As many as 20,000 gray whales migrate south from the Arctic seas of northwest Alaska to Baja's Pacific coast each year, swimming more than 5,000 miles one way. They mate and give birth in several major lagoons, including 70-mile-long Magdalena Bay, lined with sand dunes and mangroves and home to abundant seabirds. Learn about the whales in depth during daily presentations aboard ship, as well as other aspects of the natural world in and around Magdalena Bay.

During the night, Sea Bird cruises up the bay to reach the southern end of the Hull Canal, an inland channel flanked by mangroves. Our destination at the top of the channel is Boca Soledad, one of Baja's best whale-viewing areas, where we anchor for the next three days. This afternoon, we make our first whale-watching excursion inside these waters protected by slender barrier islands. Via rigid inflatable skiffs, we cruise easily and unobtrusively among the whales. Our naturalist expedition staff is by your side to interpret all the elements of the whales' behavior. The ship's professional photography instructor is also on hand to help you get the best possible whale shots. Later on, there's time to explore the wild beach, looking for seashells that are abundant in the region.

Day 4: Whale Watching at Boca Soledad
Gray whales are our main focus today on two separate small-boat excursions. Boca Soledad is a prime spot for mothers with calves, which congregate here to nurture their young in the warm, sheltered waters. It's not uncommon for a gray whale mother to push her calf right up alongside us, seeming to "introduce" it to us within arm's reach. Babies are 14-16 feet at birth and gain 50 pounds a day as they grow. Once they reach full maturity, they will weigh 30-40 tons and be 50-60 feet long. The whales are frequently as inquisitive about us as we are toward them, and the interactions we have with these intelligent, sentient beings are often described as life-changing. Whale watching is carefully regulated, however, and we always wait for whales to approach us, never pursuing them or disturbing their natural behavior. Nearly hunted to extinction in the 20th century, Baja's gray whales are a conservation priority today and an important source of ecotourism sustenance for local communities. During our visit, we'll be joined by local fishermen—resident experts who know the area and the whales intimately.

Day 5: Whale Watching / Exploring Hull Canal
Spend the morning on another whale-watching outing in Boca Soledad before returning to the National Geographic Sea Bird for the journey south to Rehusa Channel. The best view is from the sundeck as we cruise slowly back down the Hull Canal. Partway through our transit, we stop to hop into kayaks and Zodiacs for a more intimate view on our environs. The narrow passage offers close-up views of this important mangrove habitat, and we'll see a wide variety of birdlife that thrives here. Keep an eye out for grebes, pelicans, cormorants, terns, great blue herons, magnificent frigatebirds, ibis, whimbrels and willets. It’s not unusual to see 40 species of birds in just one day along this shoreline where many refuel for their migratory destinations ahead.

Day 6: Rehusa Channel—Whale Watching / San Carlos
Sea Bird has reached Rehusa Channel at the southern entrance to Magdalena Bay this morning, another premier location for whale watching. Mating behavior is often on display here, with vigorous males sometimes putting on quite a show. Once again, take to the Zodiacs for observation at close range. We also make a special stop to view a huge frigatebird colony on Isla Magdalena. Later this evening, Sea Bird makes the return voyage to Puerto San Carlos, where we spend the night.

Day 7: San Carlos—Disembark / Loreto / Depart
Wake up in San Carlos this morning. After breakfast on board, it's time to disembark for the transfer back to Loreto. There's time to shop, have lunch and explore the historic downtown, including Baja California’s first mission, The Mission of Our Lady of Loreto, before afternoon flights home.


Click here to see your trip details PDF. You should also receive it by email momentarily.
Ask a Question
Fill out the form below to receive additional information about our Ultimate Baja Whale Expedition or give us a call at 800-543-8917.
Download Trip Details
Receive our handy trip PDF by email and have everything you need at your fingertips, including highlights of the trip, itinerary, accommodations, and full details on dates, prices and logistics.


Click here to see your trip details PDF. You should also receive it by email momentarily.
/central-america/baja-mexico-gray-whale-base-camp-cruise/itinerary/
Physical Requirements