Fill out the form below to receive additional information about our The Wild Side of China: A Nature Odyssey or give us a call at 800-543-8917.

The Wild Side of China: A Nature Odyssey

Wild Side of China Itinerary 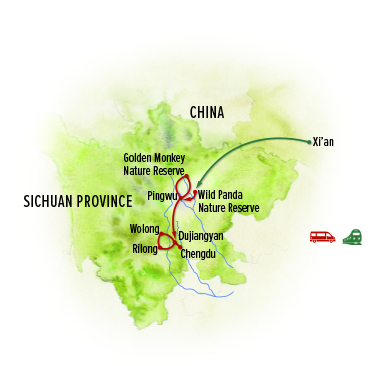 Day 1: Xi’an, China / Shaanxi History Museum Tour
Arrive in the ancient imperial capital of Xi'an, one of China’s earliest regions to be settled, and transfer to our sleek hotel located a short walk away from the Bell Tower. Xi’an is where China's first emperor united the disparate warring tribes of the vast realm in the 3rd century B.C. to launch one of the world’s most extraordinary civilizations. The capital of 13 dynasties, Xi’an’s walled city and narrow streets hark back to a time when it was a center for cultural, religious and economic interactions between East and West at the east end of the Silk Road. After lunch on your own, we’ll visit the Shaanxi History Museum, home to many of the treasures that have been unearthed from Xi’an’s 1,000-year rein as China’s leading city. The museum is renowned for its impressive collection of bronze wares, pottery figures and mural paintings in Tang tombs. Enjoy our first chance to savor a Chinese-style meal at a welcome dinner this evening.

Day 2: Xi'an—Terracotta Army
Depart early this morning for Xi’an’s most famous sight, the Terracotta Warriors. Unearthed in 1974 in the suburbs outside the walled city, the stone army is one of world's most remarkable archaeological discoveries. Consisting of 8,000 life-size soldiers, 100 chariots and 600 horses, none identical, the army was built to guard the massive mausoleum complex of Qin Shihuang (259–210 B.C.), the pivotal leader who became China’s first emperor. Later today, we take a walk atop Xi'an's ancient wall built in 200 B.C., one of the oldest and best-preserved in China, and wander through the evocative Muslim Quarter, founded by Persian and Arab traders who traveled the Silk Road 1,300 years ago.

Day 3: Qing Xi Village Visit / Wild Panda Nature Reserve
This morning, board the bullet train to Guangyuan, where we meet our bus and drive to the Wild Panda Nature Reserve. Along the way, we stop in the Muslim village of Qing Xi, with time to wander among scenes of relaxed street life amid the 300-year-old wooden buildings that date from the Qing dynasty. Just beyond the village lies a secret slice of Chinese wilderness, a chain of nature reserves little known to outsiders and visited by a mere handful of Westerners. As we follow a rushing river up the narrow valley to our destination, keep an eye out for native wildlife.

Days 4 & 5: Exploring the Wild Panda Nature Reserve
Our focus for two exciting days is a 100,000-acre sanctuary encompassing a densely forested ecosystem that is among the most diverse and intact in Asia. This national reserve, rated Grade I by WWF as a global biodiversity hotspot, is home to healthy populations of some of the world’s most endangered and vulnerable wildlife, including at least 60 giant pandas. The reserve also harbors more than 1,200 takin among its 430 different mammal species, as well as more than 2,400 different kinds of plants. Look for wildlife on morning and evening excursions, stopping to enjoy stunning vistas of waterfalls, boulder-strewn gorges and mist-shrouded limestone peaks. This is prime panda habitat, and although sightings of this famously elusive animal are extremely rare, our exclusive permits allow us into remote areas of the reserve where they freely live and breed, affording us the best possible opportunity to spot signs of them in the wild. Even if we are highly unlikely to spy them in the heavy bamboo understory, just knowing that we’re their midst is exhilarating.

Within the sanctuary, we also search for Tibetan and rhesus macaques, golden and Sichuan takin, musk deer, muntjac, serow, wild boar and blue sheep. More rarely, we may also see endangered moon bears and red pandas. Birding is superb, with more than 150 species in the reserve—the elegant golden pheasant is a prize. Night walks may reveal nocturnal creatures such as leopard cat, civet and hog-nosed badger. We can often observe them from the many remote roads and trails we explore, although dense vegetation and weather may affect our sightings.

Day 6: Wild Panda Nature Reserve / Golden Monkey Nature Reserve / Pingwu
Depart this morning on an overland journey along the scenic Fujiang River, traveling into the Min Mountains. En route, we pass the ancient town once known as Longzhou, the "prefecture of dragon" now known as Pingwu. This area is famous for a high density of wild pandas that live within its jurisdiction, though they are very rarely seen. We pass through territory home to Baima Tibetans, the descendants of Tibetan soldiers sent here more than 1,300 years ago to conquer the frontier. Keep an eye out for hats sporting white rooster feathers worn only by this group of Tibetan women.

This afternoon we reach the forested nature reserve home to golden snub-nosed monkeys that live in the shadow of Sichuan's tallest mountain. We walk uphill for about 30 minutes on a trail leading into the nature reserve where the monkeys reside, with rest stops en route. The reserve covers 62 square miles of wild terrain filled with alpine forest, waterfalls, lakes, colorful karst formations, glacial rivers and an abundance of animal life. We expect to get excellent sightings of endangered golden monkeys, which have been habituated to humans and are unfazed by our presence. The monkeys live in highly social bands, and their interactions delight us. Covered with a mantle of long, shaggy fur, they are hardy creatures, tolerating winter snow and colder temperatures better than any other non-human primate. This evening, return to Pingwu to spend the night.

Day 7: Dujiangyan
A scenic drive is in store as we make the full-day journey south to Dujiangyan. As we travel through this mountainous region, we pause periodically along our route to admire dramatic landscapes, rural villages and Buddhist temples. Along our path, we’ll pass through Mianyang, known as Fujun in ancient times, with a 2,200-year history that spans the Qin and Han dynasties. Well also stop to visit a local market in Jiangyou that gives us a taste of small-town life and showcases the bounty of fruit and vegetables that are harvested locally in the Sichuan Basin. Enjoy a traditional hot pot dinner this evening, then rest in Dujiangyan at an elegant new resort hotel.

Day 8: Dujiangyan Panda Base—Volunteer Opportunity /Jeizi Town
Today provides chances for close-up views of China’s beloved giant pandas on a visit to Dujiangyan Panda Base. Opened in 2013 with the arrival of 10 pandas, this site focuses on rescue, disease control and prevention, and rehabilitation of injured and ill wild pandas. It has expanded its mission, and its numbers, to encompass care for senior and disabled pandas as well as healthy pandas that are part of the preventive research program. A highlight of our time is a special opportunity to volunteer in their care (though it is not guaranteed and depends on the status of the pandas at the time of our visit). Conditions permitting, we’ll have the chance to interact with pandas at close range as we help their keepers care for them, including tasks such as preparing their food and cleaning enclosures.

This afternoon, stroll back in time in the elegant 1,000-year-old Jiezi Town—a contrast of water, stone and city life that is sure to captivate your imagination. Located at the foot of Fengqi Mountain with the Weijiang River flowing through it, the historic old town is revered for its ancient Qing-dynasty paved streets lined with shops and houses, the Guangyan Buddhist temple, 65-foot-tall millennium ginkgo trees and the Ziku pagoda with its legend of the white snake carved into the highest layers.

Day 9: Gengda Wolong Panda Base / Rilong
Setting out from Dujiangyan, we head for the newly rebuilt Gengda Wolong Panda Center in the Wolong Nature Reserve, a base that integrates scientific research, captive breeding and reintroduction of pandas into the wild. More than 30 pandas reside at the center, which includes a 680-acre bamboo forest. You’ll have an opportunity for close-up photos of giant pandas in this natural habitat that features a striking backdrop of mountains. Traveling west, we head for Rilong, a Tibetan village known famously as a base camp for climbing 20,505-foot Mount Siguniang. Translating to Four Sisters Mountain, this imposing massif encompasses four separate peaks, Daguniangshan, Erguniangshan, Sanfeng and Yaomeifeng, and is often referred to as the “Chinese Alps.” In Rilong we are immersed in Tibetan culture, with traditional architecture on display and yak butter tea for sale by local vendors. This high-altitude village, which sits over 10,000 feet above sea level, is the center of the Jiarong Tibetan culture, found only in this region of Sichuan province. The rural Jiarong people are known for their intricately embroidered costumes and agricultural lifestyle.

Day 10: Rilong—Shuangqiao Gou
Early risers may catch the sunrise behind the peaks in Rilong, a vista touted for its singular beauty. We spend the full day exploring the dramatic scenery of nearby Siguniangshan National Park. Entering the 25-mile-long Shuangqiao Valley, we view snow-capped peaks in every direction, with Four Sisters Mountain towering above. The valley floor is 10,000 feet above sea level, and the highest mountains nearly double that. Explore the colorful geological features and mirror-like lakes of this subalpine terrain, following boardwalk trails that weave among occasional pagodas and prayer flags. Highlights include the Yin-Yang Valley, Willow Bridge, Sun-Moon Mirror Mountain and Five-Colored Mountain with its rocks that glow red, yellow, green, blue and white. These high-altitude forests are native habitat for the endangered red panda, too. Deeper into the valley, we reach the Ginsenguo flatland, with a viewing deck overlooking highland swamps and snowy peaks, and Jiujia Lake, which is actually a group of four seasonal lakes and nine perennial ones—the legendary bathing pools for the “four sisters.”

Day 11: Dujiangyan Panda Valley / Chengdu
Head back to Dujiangyan, where we’ll have the chance to visit Dujiangyan Panda Valley. This is a new facility that is both a panda research and breeding base and a center for conservation education. In natural environs, pandas are gradually habituated and returned to the wild. Reintroduction training experts from around the globe gather here for collaborative research. This quiet research base is landscaped with beautiful flowers and we may see pandas in transitional  “dens” that are learning to live on their own in the natural surroundings. You'll see many red pandas here as well. This evening, celebrate our adventures at a festive farewell dinner.

Day 12: Chengdu / Depart
After a sumptuous buffet breakfast at our luxury hotel, transfer to the airport to meet departing flights.

Interested in extending your trip? Link it up with another adventure!
Repeater Layout : vertical-2up
Beijing & the Great Wall Extension

Don't miss a chance to walk along the 2,000 year-old Great Wall and experience a taste of China's vibrant capital—discover its dynamic history, stroll through a night market and dine on Peking duck.


Click here to see your trip details PDF. You should also receive it by email momentarily.
Ask a Question
Fill out the form below to receive additional information about our The Wild Side of China: A Nature Odyssey or give us a call at 800-543-8917.
Download Trip Details
Receive our handy trip PDF by email and have everything you need at your fingertips, including highlights of the trip, itinerary, accommodations, and full details on dates, prices and logistics.


Click here to see your trip details PDF. You should also receive it by email momentarily.
/asia-adventure-travel/wild-china-panda-tour/itinerary/wild-side-of-china-itinerary-2021/
Physical Requirements