Fill out the form below to receive additional information about our Australia South:Tasmania, Kangaroo Island & the Great Ocean Road or give us a call at 800-543-8917. 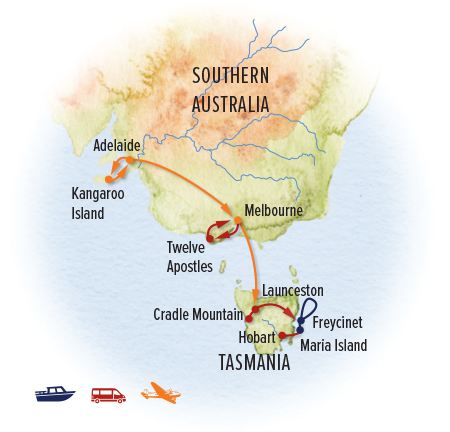 Day 1: Adelaide, Australia
Arrive in Adelaide, the sophisticated state capital of South Australia. Wedged between the Mount Lofty Ranges and Gulf St. Vincent, this is the historic homeland of the indigenous Kaurna people. Adelaide, established by British settlers in 1836 as a convict-free colony, has become an urban gateway for Australia’s burgeoning wine country. Dotted with historic buildings and lush parks, the “City of Churches” is recognizable for its multitude of spires that rise from downtown, representing diverse faiths within a city founded on a commitment to religious freedom and civil liberties. This evening, gather with our Expedition Leaders for a welcome dinner and introduction to our route through Kangaroo Island, Tasmania and Australia's most southerly coast.

Day 2: Adelaide / Kangaroo Island
After breakfast, we make the short flight to Kangaroo Island. Australia’s third largest island is famous for its pristine beaches, local wines and abundant wildlife that the island's isolation has naturally protected. Our wilderness retreat adjacent to Flinders Chase National Park is our base for exploring a surprisingly diverse landscape in the middle of the Great Australian Bight. Kangaroo Island, or “KI” as it's known by locals, is located less than 10 miles off the mainland, but its offshore status has long helped sustain considerable numbers of native Australian species, including kangaroos, platypus, New Zealand fur seals, Australian sea lions and one of Australia’s largest koala populations. Our lodge on the edge of the park puts us in the center of the bush for safari-style exploration in the early mornings and late afternoons, when Australia’s largely nocturnal species are active and most likely to be encountered.

Days 3 & 4: Kangaroo Island—Flinders Chase National Park
On this island with more than 300 miles of coastline surrounded by azure waters, we explore the remote western reaches that offer a true sense of wilderness. This region is marked by peace and solitude, with abundant birdlife and dozing koalas in the eucalyptus trees. On an expedition inside Flinders Chase National Park, search for kangaroos, Tammar wallabies, short-beaked echidnas, southern brown bandicoots, possum and bats. An early morning walk to the waterholes may reveal the elusive semi-aquatic platypus, unique to Australia. This 100-million-year-old egg-laying mammal with its duck-like bill, webbed feet and fur has thrived in two Kangaroo Island rivers during a century when it faced near-extinction on the mainland.

Visiting at sunrise and sunset, when other travelers are scarce, view the Remarkable Rocks, formed by 500 million years of wind, waves and rain, and Admirals Arch, a rock bridge that offers an ideal perch for observing long-nosed fur seals that reside nearby. Continuing around the island, encounter remnants of a maritime past at Cape du Couedic, Cape Borda and Weirs Cove. At Seal Bay Conservation Park we find the Australian sea lion, an endangered species nearly hunted to extinction in the 19th century. With a population of about 800, this is the country's third largest colony of Australian sea lions. Out in the dunes, witness their lives up close as pups play, bulls angle for supremacy and mothers nurture their young. After dark, guided walks and game drives offer a chance to search for Kangaroo Island's nocturnal species.

Day 5: Kangaroo Island / Melbourne / Cape Otway—Great Ocean Road
On a sunrise nature walk, search for more of Australia’s unique and intriguing species before flying to Melbourne via Adelaide. From Melbourne, we drive southwest along the Great Ocean Road through coastal rain forest and eucalyptus woodlands, along secluded beaches and ancient volcanic plains, admiring giant tree ferns and freshwater streams. Along the way, explore an upland waterfall and scout the gum trees for abundant koalas. This diverse region is also home to kangaroos and emus. Ultimately, we reach Cape Otway at the southern tip of Victoria’s west coast, near where the Southern Ocean meets the deep blue Bass Strait. This is the historic homeland of the Gadubanud people—an area now known as Great Otway National Park and the site of mainland Australia’s oldest surviving lighthouse. Among the eucalyptus trees around our lodge, look for kangaroos, koalas and perhaps catch a glimpse of the spotted-tail quoll, commonly known as the tiger quoll.

Day 6: Twelve Apostles & Port Campbell National Park
Today we explore a stunning stretch of coast that includes both a national park and a national marine reserve. Take in the drama of the Twelve Apostles, rugged limestone stacks that rise from the Southern Ocean off Port Campbell National Park. Eroded from mainland cliffs starting 10–20 million years ago, these structures were originally caves, then arches that collapsed to become eight isolated 150-foot-high rock towers in the sea. ("Twelve" is a misnomer, and the eight towers diminished to seven when one collapsed in 2005.) Above the water's surface, the towers change colors in shifting sunlight, while the marine park below harbors colorful sponge gardens, reef fish, soft corals and kelp forests. Exploring the park’s rock formations on the mainland, we witness a landscape constantly sculpted by wind and water. Australian fur seals are often seen bobbing in Bass Strait or hauled out in a large colony on the rocks.

Day 7: Cape Otway / Melbourne / Cradle Mountain, Tasmania
After exploring Cape Otway this morning, return to Melbourne and fly to the island state of Tasmania, located 150 miles south across the Bass Strait. Landing in Launceston, continue to the interior of this island that covers more than 26,000 square miles, 42% of which is protected as national parks and World Heritage Sites. A legacy of wilderness appreciation is intrinsic to Tasmania, the birthplace of the world’s first environmental political party. The island was occupied by Tasmanian Aboriginals for 30,000 years before the British Empire arrived in the form of a penal colony in 1803. During our ascent to Cradle Mountain, we stop for a private tour of the dramatic Marakoopa Cave in Mole Creek Karst National Park. This immense limestone structure boasts two underground streams, large vaulted chambers, expanses of glittering flowstone and dramatic stalagmites, plus a sparkling display of bioluminescent glowworms. Continue to our lodge on the edge of the national park where we settle in before an evening outing in search of the Tasmanian devil. A nearby conservation sanctuary is working to protect and sustain these mysterious animals, and our visit offers a rare opportunity to see and learn about these hard-to-find nocturnal species that are endangered in the wild. The sanctuary is involved with breeding, release and re-introduction of Tasmanian devils, in addition to field monitoring of wild populations and orphan rehabilitation. It also houses the closely related spotted-tail and Eastern quolls, offering a trifecta of Tasmania’s three largest carnivorous marsupials. If our timing is right, we may even witness a feeding.

The imposing landscape has earned these peaks and lakes one of Australia’s earliest national park designations. Cradle Mountain stands 5,069 feet above sea level, making it Tasmania’s sixth tallest peak. Its jagged profile is surrounded by diverse habitats of grassland, rain forest and ancient plants, including the long-lived King Billy pine and the native deciduous beech. Wombats are the Tasmanian cousin to the koala, with a strong around Cradle Mountain, which we seek out on forest walks at dusk and dawn. We’ll also look for wallabies, pademelons and myriad birdlife—and if patience prevails as we sit quietly, we may even witness a platypus emerge from the pond that fronts our mountain lodge. When the moon rises, set out on a night walk in search of wild Tasmanian devils and quolls. While they may prove elusive, we're likely to encounter possum, echidna and wallabies.

Day 9: Cradle Mountain / Freycinet
After a sunrise walk at Cradle Mountain, we drive toward Tasmania’s wild east coast. This is an uncommon and spectacular Australian coastline dotted with historic fishing towns and five national parks, including Freycinet National Park, our next base for exploration. En route, enjoy a private tour with one of the head conservationists in charge of education and rehabilitation at the Trowunna Wildlife Sanctuary. Home to the world's largest heritage population of endangered Tasmanian devils, the sanctuary also shelters a wide range of marsupials, birds and reptiles. Native Tasmanian wildlife thrives in this haven filled with native flora, ensuring safe wild habitat for breeding and rehabilitation.

Day 10: Freycinet National Park
With its dramatic mountains, white sand beaches, secluded bays and the crystal-clear Tasman Sea at its doorstep, Freycinet National Park serves up arresting vistas on Tasmania’s eastern coastline. The park occupies most of the Freycinet Peninsula, a natural area dominated by the pink granite peaks of the Hazards Range and famous Wineglass Bay, heralded among the world’s top beaches. The park is a haven for birdlife, and the Moulting Lagoon is an internationally recognized wetland sanctuary for black swans, waterfowl and other migratory birds. Explore the mountains and bird-filled beaches on foot before venturing into the bay on a half-day cruise that winds around the peninsula’s cliffs and coves. Making landfall on one of the rugged islands, a private lunch awaits beyond a rockbound bay. Throughout our boat journey, keep an eye out for dolphins, seals and migrating whales when the season is right. If we're lucky, we might even spot a white-bellied sea-eagle overhead. After dark, enjoy an intimate encounter with little blue penguins, also called fairy penguins, as they make their way onshore and into their nests for the night.

Day 11: Freycinet / Maria Island National Park / Hobart
Heading south from Freycinet, we travel overland to the coastal town of Triabunna on the Tasman Sea where we board a ferry across the Mercury Passage. Our destination is mountainous Maria Island, the centerpiece of Maria Island National Park. Exploring the island on foot, we visit ruins of a penal colony, part of a convict past now protected as a World Heritage Site, limestone rocks embedded with fossils, wind-whipped sandstone cliffs, and beaches revealing a vibrant array of tidal-zone marine life. Among its towering peaks and a eucalyptus forest, the island is a paradise for birdwatchers. We may spot 11 of Tasmania’s 12 endemic bird species here, including the endangered forty-spotted pardalote and rare Cape Barren goose. The island has long offered a safe haven for diverse wildlife, and we’ll look for wombats, forester kangaroos, Bennetts wallabies, Tasmanian devils and the small, solitary Tasmanian pademelon. A marine reserve in the surrounding waters regularly attracts seals and whales. At the end of the day, we make our way to Hobart, Tasmania’s capital at the mouth of the Derwent River and one of Australia's oldest cities. Gather this evening for a farewell dinner and toast your traveling companions with a glass of local Tasmanian wine.
Day 12: Hobart / Depart
Our southern Australia nature safari comes to a close in Hobart this morning. A transfer to the airport is included for flights to the mainland and beyond, including the option to extend your time in Australia.

Interested in extending your trip? Link it up with another adventure!
Repeater Layout : vertical-2up
Australia North:Kakadu, Daintree & the Great Barrier Reef
NEW TRIP!


Click here to see your trip details PDF. You should also receive it by email momentarily.
Ask a Question
Fill out the form below to receive additional information about our Australia South:Tasmania, Kangaroo Island & the Great Ocean Road or give us a call at 800-543-8917.
Download Trip Details
Receive our handy trip PDF by email and have everything you need at your fingertips, including highlights of the trip, itinerary, accommodations, and full details on dates, prices and logistics.


Click here to see your trip details PDF. You should also receive it by email momentarily.
/asia-adventure-travel/southern-australia-tasmania-nature-tour/itinerary/
Physical Requirements