Fill out the form below to receive additional information about our Australia's Kakadu, Daintree & Great Barrier Reef or give us a call at 800-543-8917.

Learn more about the steps we are taking to enhance safety in response to COVID-19. 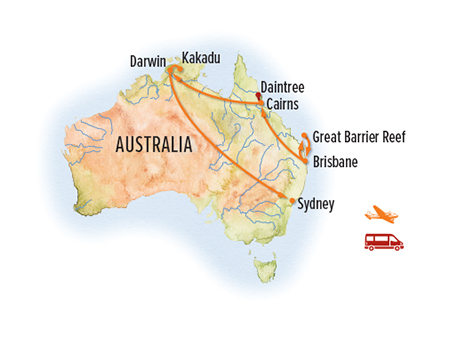 Day 1: Brisbane, Australia
Land in the capital of Queensland, Australia’s “Sunshine State.” Subtropical Brisbane is an urban center with a laid-back vibe. Before the first European convict jail was built in 1824, Aboriginal clans lived along the river that winds through this landscape. During World War II, Brisbane blossomed as the main Allied headquarters in the South Pacific. Today, it’s a modern city with access to vast and remote stretches of wild coastline, reef, rain forest and desert. Gather this evening with our Expedition Leaders for a welcome dinner and introduction to our journey into Australia’s northern reaches.

Days 2–4: Lady Elliott Island—Great Barrier Reef Marine Park
Travel overland this morning from Brisbane to Hervey Bay, making stops along the way, and board our a scenic chartered flight to Lady Elliott Island. Fly directly over the Great Barrier Reef to land on the island where we'll spend three days exploring the southern tip of this natural wonder. The barrier reef stretches over 1,400 miles along the coast of Queensland in the Coral Sea, comprising 900 islands and more than 2,900 individual reefs. It is the world's largest coral reef and home to an extraordinary variety of marine life—earning it designations as a UNESCO World Heritage Site and one of the Seven Wonders of the Natural World. Lady Elliott Island is a coral cay situated within the most highly protected Green Zone. The island's sole lodging is a family-run ecolodge focused on reef health and sustainability (including using 100% renewable energy). The waters are famous for an abundance of manta rays, turtles and other spectacular marine life that dwell on a pristine stretch of coral.

Staying in this protected sanctuary at the heart of the marine ecosystem, we’ll explore clear ocean waters teeming with turtles, fish, rays, reef sharks and more. Witness humpback whales migrating north from June to September, and look for myriad rays. Because Lady Elliot Island sits directly on the reef, snorkeling is easy-access with shallow waters at low tide, and coral that is accessible directly off the beach. In addition, we'll make reef excursions farther afield. Snorkeling instruction is provided, while experienced scuba divers can opt for deeper exploration at 20 dive sites around the island. On shore, we'll check out the historic lighthouse and seek out resident birdlife, then head out on a glass-bottom boat with resident naturalists. We'll learn about corals and the climate changes that are altering the ocean and threatening the reef and its resident species. At night, investigate the dark Southern sky from our remote ocean outpost.

Day 5: Lady Elliott Island / Cairns / Daintree Rain Forest—Cape Tribulation
This morning, make one last dip into the Great Barrier Reef marine sanctuary that is home to more than 1,500 species of colorful fish. Then enjoy one more remarkable aerial perspective as we fly to Cairns via Brisbane, absorbing the immensity of the offshore coral wilderness from above. From Cairns, travel north by road toward Cape Tribulation, where two World Heritage Sites, Daintree Rain Forest and the Great Barrier Reef, converge. The journey to our secluded jungle lodge follows the coast before turning deep into the ancient ferns, emerald vines and dense canopy that inspired the movie Avatar. Along the way, watch for rare and endangered cassowary, the spectacular Australian birds that stand up to 6.5 feet tall. Ferry across the Daintree River, which teems with saltwater crocodiles, to reach our destination inside the Cape Tribulation sector of Daintree National Park, land traditionally owned by the Eastern Kuku Yalanji Aboriginal people. This is part of the Wet Tropics World Heritage Area, encompassing the planet's most ancient rain forest.

Days 6 & 7: Daintree National Park
This 135-million-year-old tropical rain forest harbors an unusual array of wildlife, including the musky rat kangaroo and the southern cassowary. The Daintree Rain Forest covers some 460 square miles, reaching to the sea. It is the world’s oldest continually surviving tropical rain forest, named for 19th-century Australian geologist and photographer Richard Daintree. High in biodiversity, it harbors 30% of Australia’s frog, reptile and marsupial species, 90% of the country’s bat and butterfly species, and 7% of the continent’s bird species. Wildlife thrives in habitats ranging from tropical rain forest to offshore fringing reefs to massive granite outcrops. Wisk and tassel ferns found in the Daintree represent some of Earth's earliest land plants, and other ancient flora include plum pines, southern yews and buny pines. We find plant species with Jurassic and Cretaceous roots—remnants of the dinosaur age—and 430 bird species that live in the canopy, including locally endemic tooth-billed and golden bower birds, lovely fairywrens, yellow-spotted honeyeaters, Victoria’s riflebird, Bower’s shrike-thrushes and fernwrens.

Set out on foot and by 4x4 to traverse rugged mountains and visit raging waterfalls and swift rivers. In Mossman Gorge, hear local Kuku Yalanji stories and legends during a private tour with an Aboriginal guide who leads us to special places and culturally significant sites. During a visit to the Botanical Ark, a private conservation-driven ethno-botanical garden, view plants that indigenous rain forest cultures all around the world still use for food, spices, shelter, medicine, cosmetics, fibers, oils, dyes and other everyday needs.

Day 8: Cairns / Darwin—Bamurru Plains
Return early to Cairns and fly to Darwin, a former frontier outpost that is the gateway to Australia's "Top End" and Kakadu National Park. We transfer by light aircraft to Bamurru Plains, our secluded safari-style camp located on a private concession bordering the park. On the coastal floodplains of Australia’s most northerly reaches, we have exclusive access to 115 square miles of savanna and woodland along the Mary River. This is the tropical side of the remote Australian Outback, home to one of the world’s largest saltwater crocodile populations and an annual migration of over 100,000 magpie geese. Skim across the floodplains by airboat, cruise the Sampan River, and take guided walks and game drives in search of brumbies, buffalo, dingos and wallabies in this wild and unusual environment.

We'll spend an entire day inside Kakadu, Australia’s largest national park and a living cultural landscape. Aboriginal people have continuously called Kakadu home since before the last ice age—for more than 65,000 years. In fact, there are so many wonders within the 7,700-square-mile park that Kakadu received dual UNESCO World Heritage designations, for both outstanding natural and cultural features. Kakadu is Aboriginal land, and the Bininj/Mungguy owners work hand-in-hand with Parks Australia to jointly manage the it using traditional knowledge and modern science. Kakadu’s 5,000 rock art sites represent one of the longest historical records of any group of people in the world and feature naturalistic paintings of animals, traditional X-ray art, and depictions of the first European contact. We examine ancient rock art that reveals long-extinct animals and seek out abundant wildlife that inhabits this complex ecosystem today—including a third of all Australia’s bird species.

Kakadu contains stunning biodiversity, including 68 mammals (almost one-fifth of Australia’s mammals), more than 120 reptiles, 26 frogs, 300 tidal and freshwater fish species, some 2,000 plants and over 10,000 insect species. Crocodiles are the world’s largest living reptiles, having thrived unchanged for nearly 200 million years. We anticipate seeing two crocodilian species native to Australia, the endemic freshwater crocs that live in rivers, creeks and pools, and saltwater crocodiles that thrive in floodplains, billabongs, gorges and coastal waters. In the savanna woodlands, which make up nearly 80% of Kakadu, keep an eye out for giant termite mounds.

Day 11: Kakadu / Darwin / Sydney
After a final morning excursion in Kakadu, return to Darwin to catch our afternoon flight to Sydney. This evening, gather for a farewell dinner.

Day 12: Sydney / Depart
Our northern Australia nature safari comes to a close this morning. Transfer to the airport for your homeward flight, or extend your time down under.


Click here to see your trip details PDF. You should also receive it by email momentarily.
Ask a Question
Fill out the form below to receive additional information about our Australia's Kakadu, Daintree & Great Barrier Reef or give us a call at 800-543-8917.
Download Trip Details
Receive our handy trip PDF by email and have everything you need at your fingertips, including highlights of the trip, itinerary, accommodations, and full details on dates, prices and logistics.


Click here to see your trip details PDF. You should also receive it by email momentarily.
/asia-adventure-travel/northern-australia-nature-tour/itinerary/lady-elliott-island-itinerary/
Physical Requirements