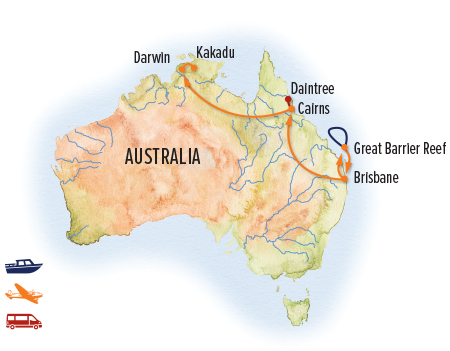 Day 1: Brisbane, Australia / Margate
Arrive in Brisbane, the capital of Queensland, Australia’s “Sunshine State,” and transfer to our beachfront hotel on Moreton Bay, approximately 30 minutes away in the suburb of Margate. Gather this evening with our Expedition Leaders for a welcome dinner.

Days 2–4: Lady Elliot Island—Great Barrier Reef
Transfer to a nearby airstrip to board our small plane to Lady Elliot Island, situated directly on the Great Barrier Reef. We spend the next several days exploring the southern tip of the world’s largest and most biodiverse coral ecosystem, spanning 1,400 miles in the Coral Sea. The reef sustains an astounding variety of marine life, earning it designations as a UNESCO World Heritage Site and one of the Seven Wonders of the Natural World.

Lady Elliot, a coral cay lying within the reef’s most highly protected Green Zone, is the optimal base from which to explore its wonders. The island's sole accommodation is an award-winning family-run ecolodge focused on reef health and environmental sustainability. Because Lady Elliot Island sits directly on the reef, we can snorkel from the beach as well as on boat excursions. Snorkeling instruction is provided, while certified scuba divers can opt for deeper exploration at 20 dive sites around the island (extra cost). On a glass-bottom boat with local naturalists, view the undersea realm and learn how corals are being impacted by climate change. Other activities include a visit to the historic lighthouse, birdwatching and stargazing.

Day 5: Lady Elliot Island / Margate
Spend the morning exploring more of Lady Elliot Island and the marine wonderland that surrounds it. Within this protected sea sanctuary, clear ocean waters teem with manta rays, sea turtles, gentle reef sharks and more than 1,500 species of tropical fish. The easily accessible snorkeling here is some of the best in the entire reef system. From June to September we might see humpback whales, which migrate northward during this season. And the island is home to the second-highest diversity of seabirds on the barrier reef. After lunch, we fly back to Margate, surveying the massive barrier reef ecosystem once more from the air. Return to our hotel on the beach to spend one more night before continuing our journey northward tomorrow.

Day 6: Brisbane / Cairns / Daintree Rainforest
Transfer to the Brisbane airport for our flight to Cairns. From Cairns, we drive north to Cape Tribulation where two World Heritage Sites and distinct ecosystems—the Great Barrier Reef and Daintree Rainforest—converge. The route to our secluded ecolodge follows the coast before turning deep into the ancient ferns, emerald vines and dense canopy that inspired the film Avatar. Along the way, look for the endangered cassowary, the spectacular Australian bird that stands up to 6-1/2 feet tall. Ferry across the Daintree River, thick with saltwater crocodiles, to reach our destination inside Daintree National Park—land traditionally the province of the Eastern Kuku Yalanji Aboriginal people. This is part of the Wet Tropics of Queensland World Heritage Area, a region of spectacular scenery and rugged topography encompassing rivers, gorges, waterfalls and mountains draped in the planet's oldest rain forest.

The Daintree Rainforest covers 460 square miles and is named for 19th-century Australian geologist and photographer Richard Daintree. This 135-million-year-old tropical forest shelters an unusual array of wildlife, including the musky rat kangaroo and southern cassowary. High in biodiversity, the Daintree holds 30% of Australia’s frog, reptile and marsupial species and 90% of its bat and butterfly species. Some 430 bird species live in the canopy, including the locally endemic tooth-billed and golden bowerbird, lovely fairywren, yellow-spotted honeyeater, Victoria’s riflebird, Bower’s shrikethrush and fernwren. Ancient plant species date to the Jurassic and Cretaceous periods—remnants of the dinosaur age—with wisk and tassel ferns representing some of Earth's earliest land plants. Other ancient flora includes plum pines, southern yews and buny pines. Tonight, take a walk after dark with our Expedition Leader as we search for nocturnal wildlife.

Day 7: Daintree National Park—Private Sunrise Cruise / Quoll Conservancy
Rise early for a private boat trip on the Daintree River, flanked by dense rain forest and mangroves, to enjoy birdwatching and nature photography in the golden light of dawn. Our solar electric boat moves silently through the water as we cruise in search of crocodiles and other wildlife. Lunch at the Daintree Tea House, secluded in the rain forest and surrounded by the sounds of birds, is a special interlude in our day.

Then it’s on to the Atherton Tablelands and the Australian Quoll Conservancy for a behind-the-scenes tour not offered to the general public. The organization supports a national recovery plan for the spotted-tailed quoll, one of four endangered quoll species that are Australia’s largest carnivorous marsupials. During our visit, we get to be citizen scientists, helping conservation experts conduct research that will aid in the preservation of these rare animals in Far North Queensland. We may check camera traps and motion detection areas to catalog sightings, document food sources, locations and behaviors, and search for evidence of quolls. We also visit the astonishing Curtain Fig Tree, an epic rain forest survivor with its own complex ecosystem. Estimated to be at least 500 years old, this massive strangler fig has an aerial root system that drops 49 feet to the ground. The birdlife heard in the surrounding forest is also impressive.

Day 8: Exploring the Atherton Tablelands—Lake Barrine Cruise
Lying inland from Cairns are the Atherton Tablelands, a large green plateau covered with rain forest, savanna and lakes, and known for impressive waterfalls and wildlife. In the vine forest at higher altitudes, we find fascinating marsupials and monotremes including the mainland platypus and Lumholtz tree kangaroos. Tree kangaroos remained undetected by Western settlers until almost the 20th century, being secretive, well-camouflaged canopy dwellers in remote tracts of rain forest. In Yungaburra we’ll try to spot the elusive platypus in the wild.

Wildlife viewing and birdwatching is excellent at Lake Barrine, a volcanic lake in Crater Lakes National Park. On a cruise and a forest walk, we often see red-legged pademelon, musky rat kangaroo, snapping turtle giant eel, eastern water dragon and saw-shell turtle. At Tolga Bat Hospital, one of Australia’s most acclaimed and innovative ecotourism experiences, learn about conservation of bats and their habitat through the community group’s rescue and landcare work, advocacy, education and research. Another night walk is in store with our Expedition Leader as we explore the area around our lodge to spy the many species that become active once dusk falls.

Day 9: Cairns / Darwin
Drive back to Cairns this morning, then fly to Darwin, a former frontier outpost that is the gateway to Australia's "Top End” and Kakadu National Park. Located on the Timor Sea just below Indonesia and Papua New Guinea, Darwin is the capital of the sparsely populated Northern Territory. With roots into Aboriginal Dreamtime, Darwin’s indigenous heritage extends back tens of thousands of years. More recently, Darwin was an important transportation hub from the early days of European settlement and a strategic Allied base during World War II. Today the city blends Aboriginal, Australian and Asian cultures in a lively melange. Spend the night at our waterfront hotel in the heart of the city’s seaside promenade.

Day 10: Darwin / Bamurru Plains
Explore a bit of Darwin this morning, then make a 30-minute scenic flight by private chartered aircraft to Bamurru Plains, our secluded safari camp on a private concession bordering Kakadu National Park. On the coastal floodplains of Australia’s most northerly reaches, we have exclusive access to 115 square miles of savanna and woodland along the Mary River. This is the tropical side of the remote Australian Outback, home to one of the world’s largest saltwater crocodile populations and an annual migration of over 100,000 magpie geese. Skim across the floodplains by airboat, cruise the Sampan River, and take guided walks and game drives in search of brumbies, buffalo, dingos and wallabies in this wild environment.

Greater Kakadu is also a living cultural landscape. Aboriginal people have continuously called Kakadu home since before the last ice age—for more than 65,000 years. In fact, there are so many wonders within the 7,700-square-mile Kakadu National Park that it received dual UNESCO World Heritage designations, for both natural and cultural features. Kakadu is Aboriginal land, and the Bininj/Mungguy owners work hand in hand with Parks Australia to jointly manage it using traditional knowledge and modern science.

The Kakadu region contains astounding biodiversity, including 68 mammal species, more than 120 reptile, 26 frog and 300 tidal and freshwater fish species, some 2,000 plant species, more than 10,000 insect species and one-third of all Australian bird species. Kakadu’s giant crocodiles are the world’s largest living reptiles, having thrived unchanged for nearly 200 million years. We anticipate seeing freshwater crocs that live in rivers, creeks and pools, and saltwater crocodiles that thrive in floodplains, billabongs, gorges and coastal waters—both species are endemic to Australia.

Day 13: Kakadu / Darwin / Depart
Our northern Australia nature safari comes to a close this morning as we fly back to Darwin to meet departing flights, which should be booked no earlier than noon.
Repeater Layout : vertical