Say the words “American West” and right away you imagine vast, open plains, deep canyons and starting over. What is it about going West that has always meant hope in the American psyche, as if a new beginning could be had just by heading in a certain compass direction? In 1865, newspaperman Horace Greeley was credited with the quote “Go West, young man.” It soon became a mantra for 19th-century Americans, when things didn’t work out quite the way they had planned farther east.

It follows that there is something in the landscape of the West that suggests to all of us a sense of hope and renewal. Characterized by expansive grasslands that spread out as far as you can see, mountain ranges and so many stars in the night sky that you can’t even begin to imagine the number, the West makes possibilities—such as the Milky Way itself—seem endless.

One September not long ago, I left my Wisconsin home to take an eight-day guided trip to the West to see if I could find that sense of hope that we all imagine is inherent in that iconic landscape. 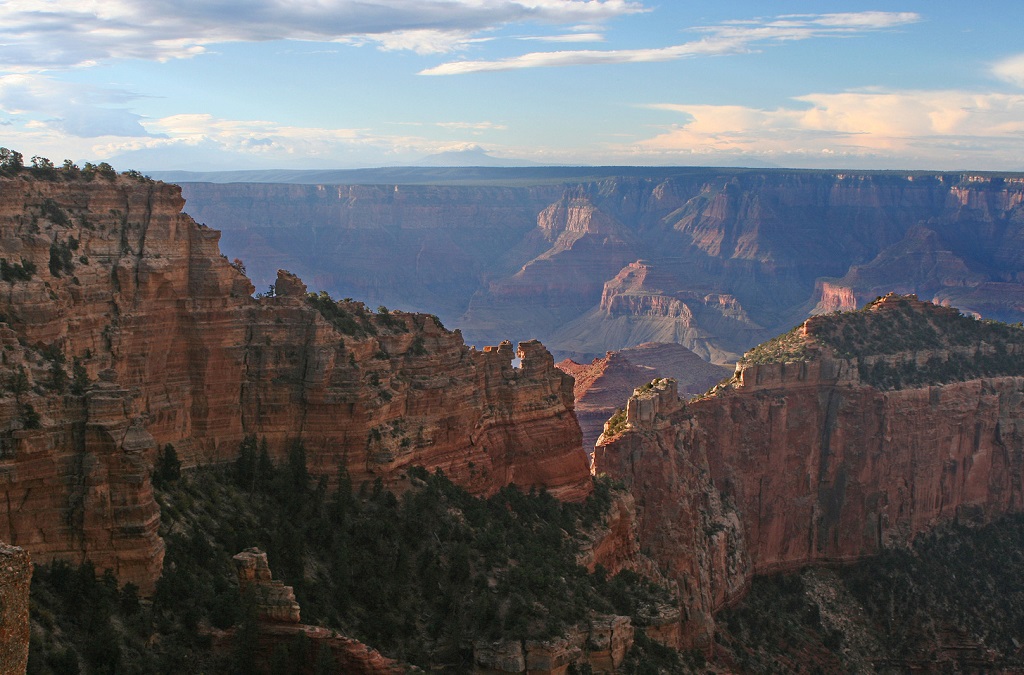 I went looking for hope in the wide, open spaces of the West. ©Candice Gaukel Andrews

On my climb up the Grand Staircase, I would cross the Colorado Plateau and stop at three canyons: Bryce, Zion and the North Rim of the Grand Canyon. Fresh in my mind were the images we’ve all grown up with: four-color spreads in magazines and books of sunlit mountain peaks, red rock cliffs, cowboys, cattle herds and campfires.
The West. 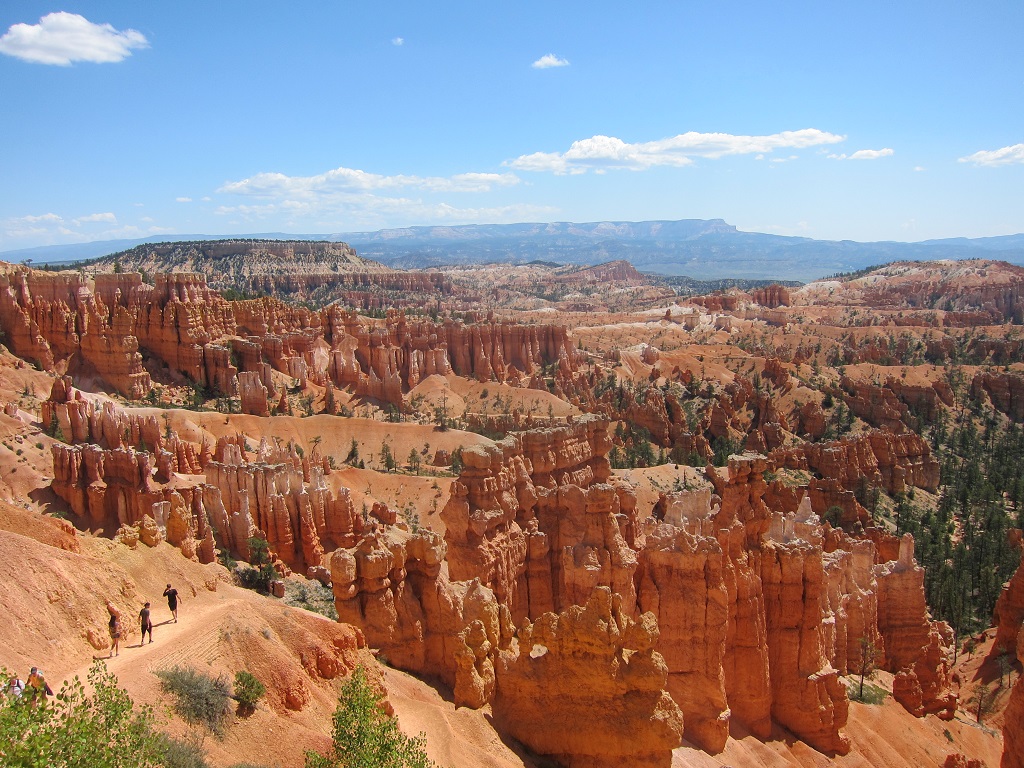 I found out quite quickly that I’m a flatlander, through and through. The altitude here on the Colorado Plateau is giving me a headache, making it hard for me to sleep at night and leaving me breathless with the slightest effort. The dryness is another shock to my system. My throat is perpetually scratchy, and my skin is cracking. It’s like my own private battle with the West over water rights; this country is pulling every last drop out of me, and I’m fighting back by trying to stay hydrated and moisturized.

Driving up into the Dixie National Forest, breath is even harder to find because the look of the landscape itself takes it away. It is so beautiful here that I’m sure words for describing this holy ground will never be allowed to be spoken out loud. I can feel the water-sculpted holes in the soaring rock towers suck in the words I try to form, as if they’re being drawn out of me and circled down a drain quickly, before they can be voiced. I can almost see other sentences my dry throat can’t utter washing down the canyons like boulders and lying in the bottom of rocky gorges. The Dixie National Forest has 1.8 million acres for my words to get lost in—to sink lower in—as I continue to climb higher.

Upon reaching an altitude of 7,000 feet, I find the trees are dressed in gold at this time of year. Soon their leaves will drop, and the mule deer will go lower. Fallen, horizontal trees already seem to be walking down the slopes, much like the deer will, shortly. Everything is going down, but I still climb up. 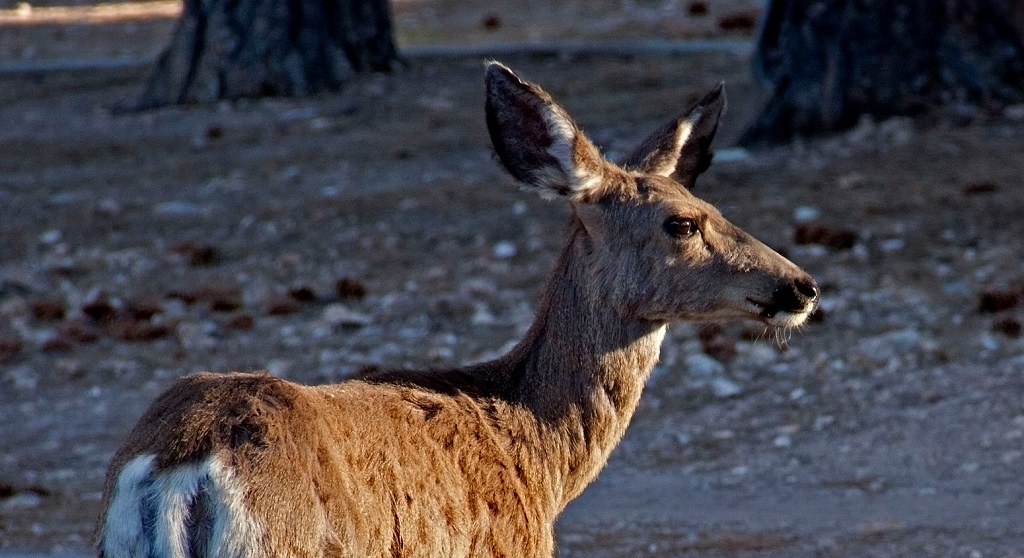 A mule deer in the canyons. ©Candice Gaukel Andrews

At mid-morning, we reach Bryce Canyon National Park. The Paiutes have a legend about the hoodoos and fins here: they are really people that Coyote, the Trickster, has turned into stone. Legend people. It seems Coyote has tricked me, too, since my words are stones; heavy and unable to roll off my tongue.

I take the trail that goes down among the hoodoos of Bryce. On the narrow path, they are close, so red and so real. Looking up, they shoot into the air. Their shapes change with every tilt of the head or lean of the body. Some people see castles or animals in these fantastic formations, but I see eons of phrases and scripts—an old, forgotten penmanship in a language not remembered, imprisoned in stone and waiting to be released again. Colors are even richer and more vibrant in the cool shadows at the bottom.

My last exploration in Bryce is on the Bristlecone Loop Trail. My guide spots a flammulated owl, an animal he has never seen and says he will most likely never see again. The path takes us through a forest filled with dead trees. I could not help but stop and feel the bones of one—a grandfather, with a trunk as smooth as silk, who still holds to the Earth.

In Bryce, I have seen ancient ones made of stone and the skeletons of elders, but I cannot say that I have perceived the thing we call hope. 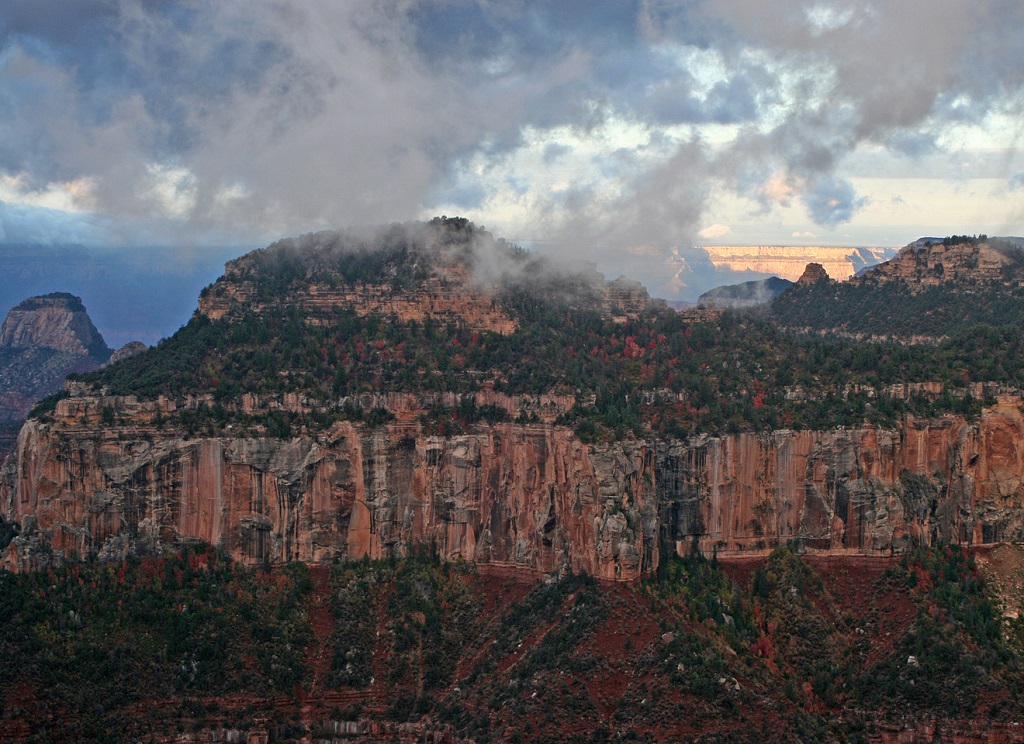 The massive rock walls of Zion National Park are in contrast to the hoodoos of Bryce. ©Candice Gaukel Andrews

The stones of Zion National Park are far different than those of Bryce. Here, in this “place of refuge,” narrow hoodoos give way to gigantic slabs of rock. Zion’s massive monoliths enfold and provide protection, unlike the stones of Bryce that take life and entomb it.

Among the tallest sandstone cliffs in the world, prickly pear cacti and Hopi blanket flowers bloom. Watching the sun paint its touches on the West Temple at 7:00 a.m., I understand why painters and photographers love the light. It selects and highlights what’s beautiful for you.
But like Bryce, Zion, too, demands a payment. The hike up to the Emerald Pools is grueling in the hot sun and walking the Narrows in the Virgin River mandates a sure-footedness that requires me to succumb to using a walking stick.

It is not the fresh start—the promise of the West—I was looking for. 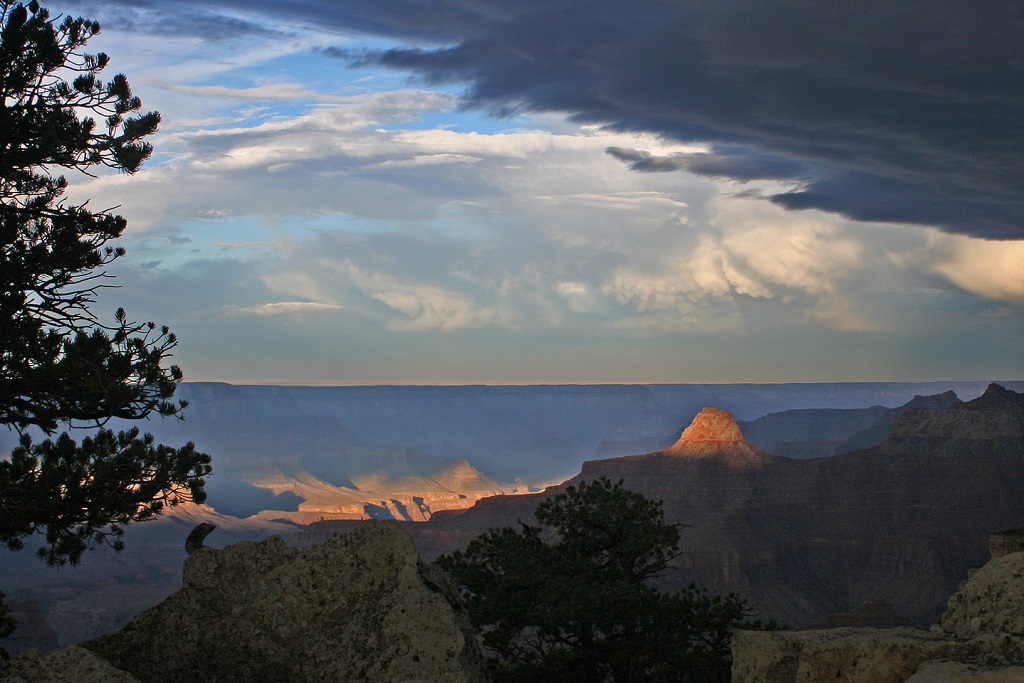 It was from the Virgin River in 1869, after 99 days of exploring the Grand Canyon, that John Wesley Powell finally emerged. His experience caused him to reflect that trying to capture the canyons in words and pictures was futile. He stated that, in the end, “language and illustration must fail.”

Powell meant that his words and journal drawings could never make the cut—not like the talented and impressive river artists that had sculpted these canyons over eons. The Virgin and the Colorado rivers have been illustrating this landscape and writing their language on the land for millions of years. How could we humans ever compete?

At 5:00 a.m., just before entering the North Rim of the Grand Canyon, I spot embers flashing in the darkness. This is the last smoldering of a forest fire that began in July and burned 59,000 acres. 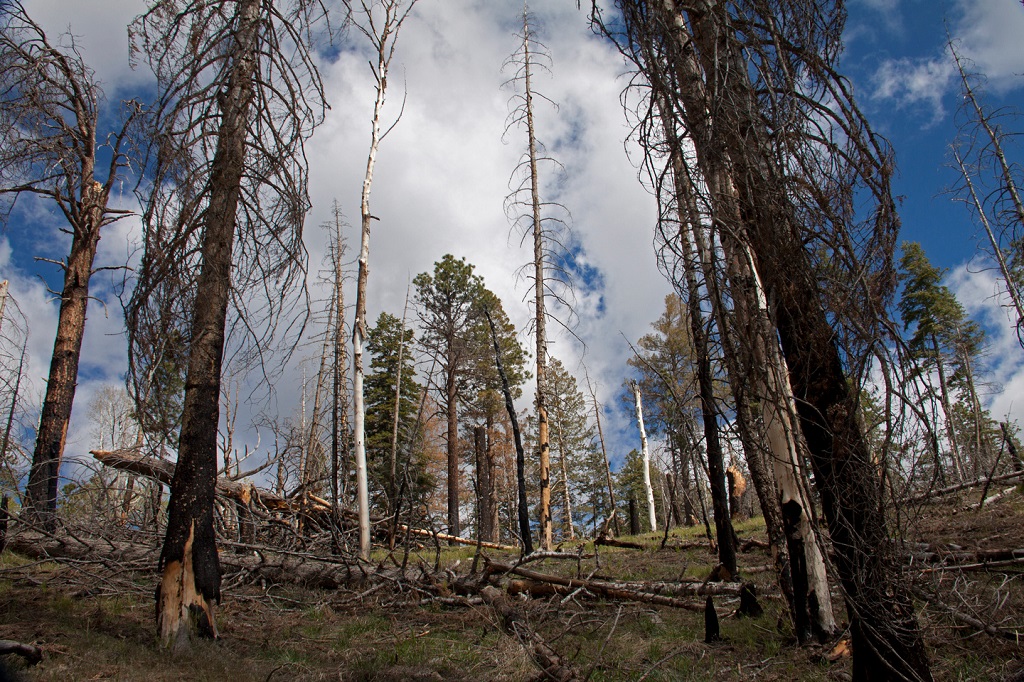 Already, in the dim light of dawn in this newly burned area I can see green sprouting up from the forest floor. Regrowth starts immediately after a forest fire. Oxygen is being released from the soil. For some reason, despite a continuous parched throat and a still achy head, I can breathe deeply again.

Just beyond the burn and climbing still higher, quaking aspen leaves shiver yellow in the light of a new day. In these vibrant colors—the burning reds of the embers, the vivid greens of new growth and the sparkling golds of the trees—and in the reinvigorated air, I can’t help but feel hope.

I wouldn’t have thought my quest for “the West” would end in the hues of the trees rather than in the colors of the canyons. I didn’t know it would end almost 9,000 feet in the air just short of the deepest canyon of them all. For me, the hope the West stands for really isn’t in the open plains and starry night skies that we’ve come to associate with it—hope comes from a dense forest, newly growing, high on a canyon rim in the September sun. 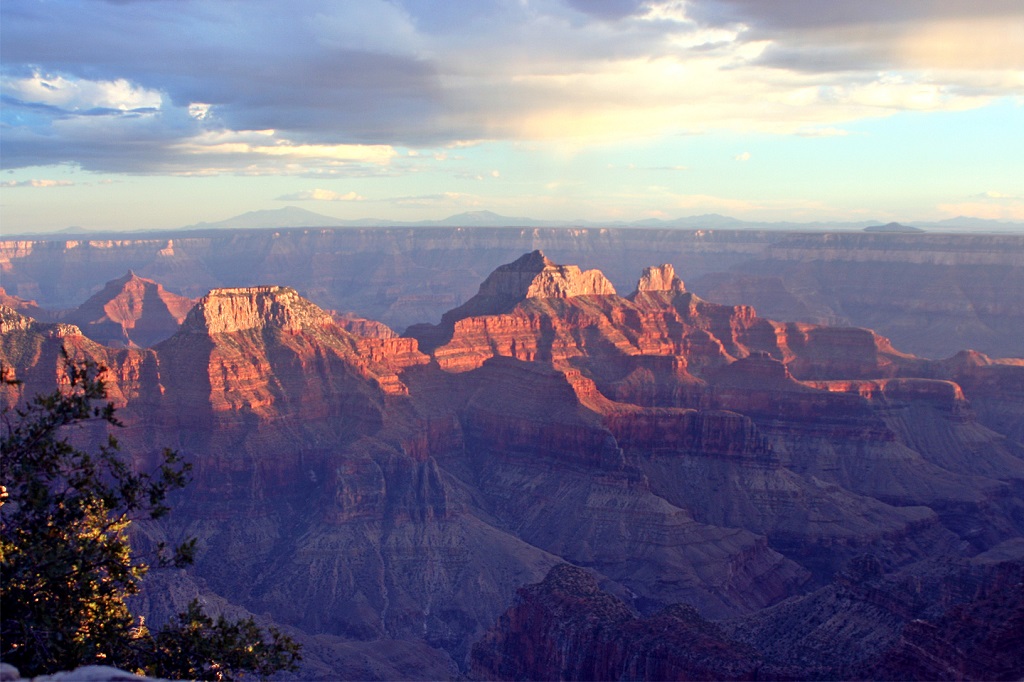 In the September sun, I did find hope just short of the deepest canyon of them all. ©Candice Gaukel Andrews 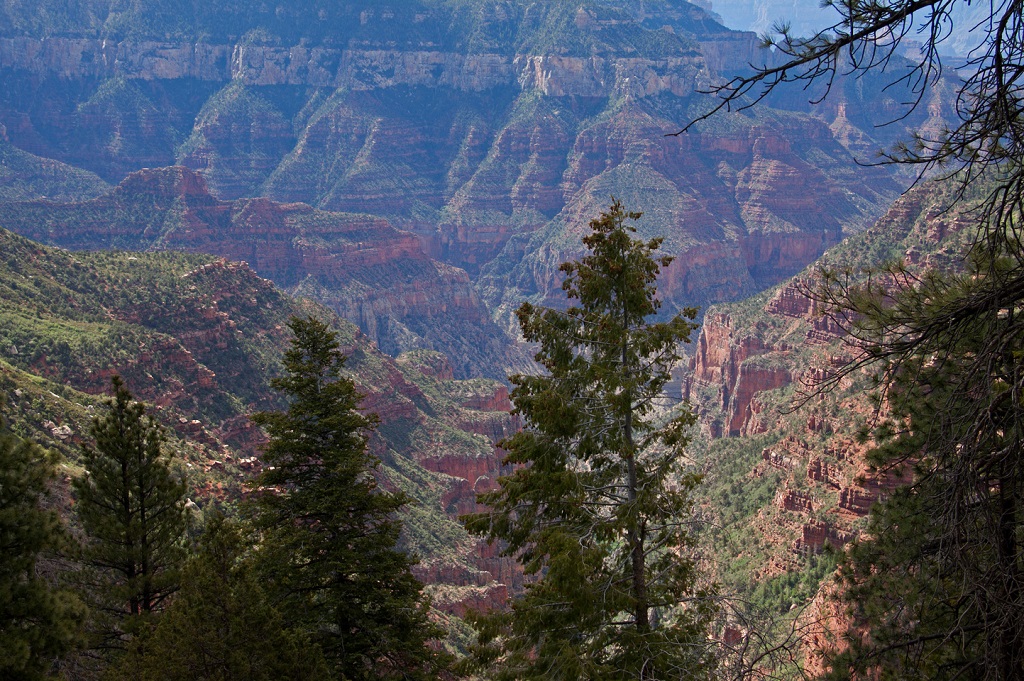 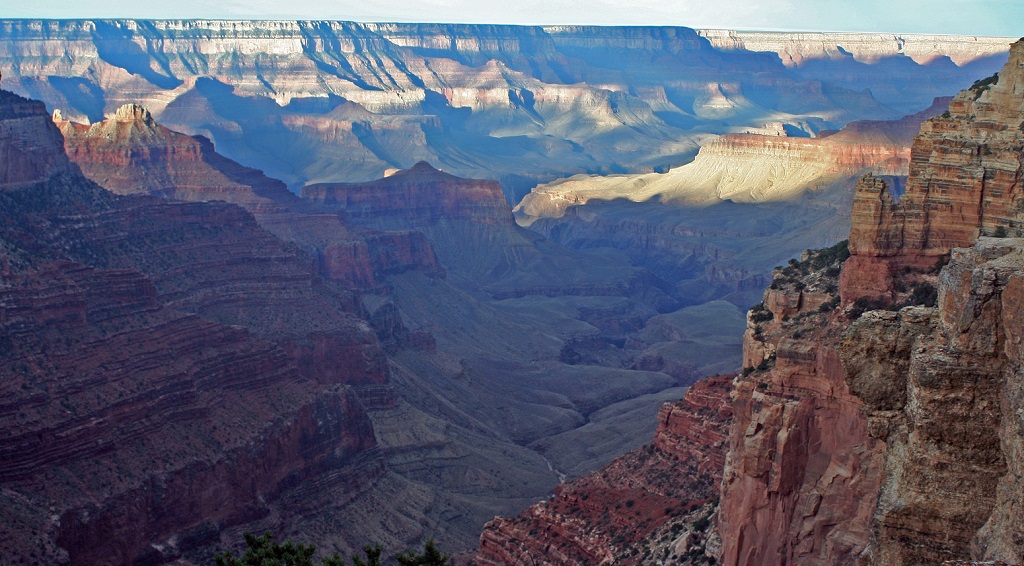 The North Rim of the Grand Canyon is more remote and less developed than the South Rim. ©Candice Gaukel Andrews 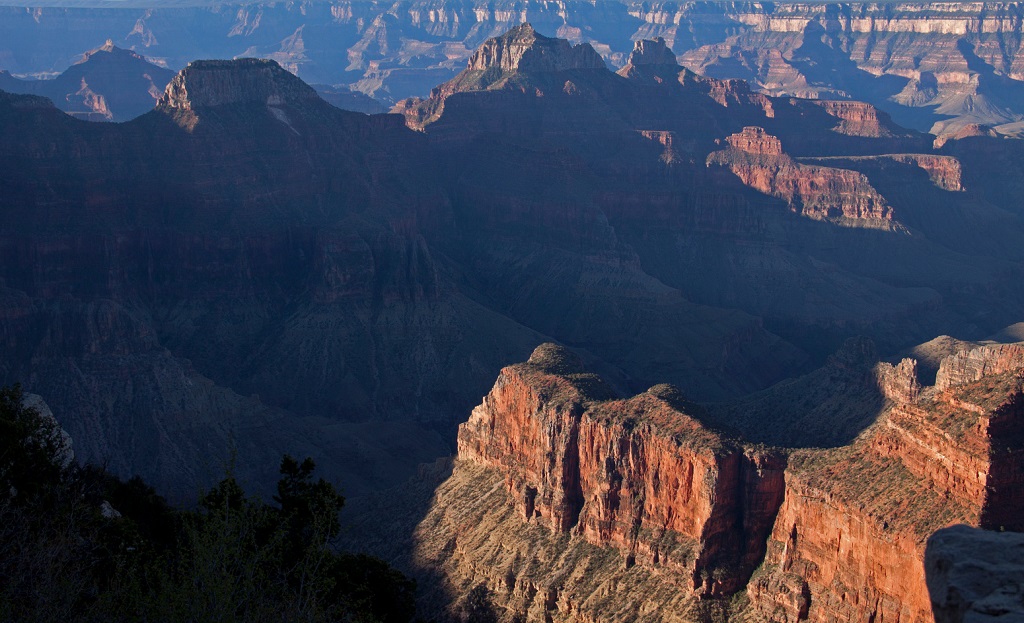 The North Rim gets far fewer visitors than the South Rim, but some think its viewpoints are more spectacular since they are located at a higher elevation. ©Candice Gaukel Andrews 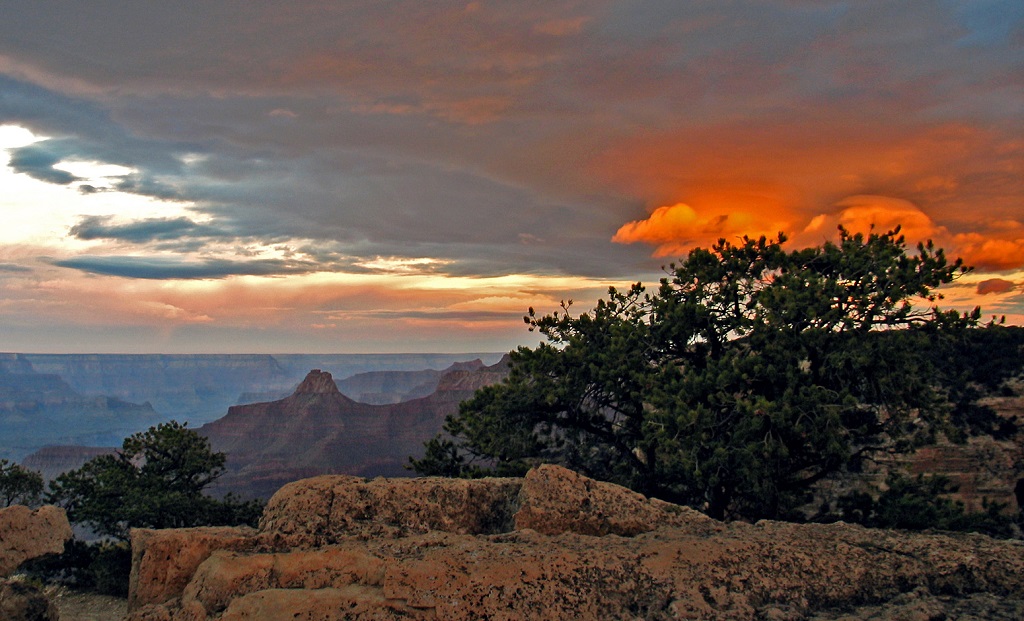 The weather on the North Rim is cool—and often dramatic. ©Candice Gaukel Andrews

Natural elements have been illustrating this landscape and writing their language on the land for millions of years. ©Candice Gaukel Andrews
See America's Southwest Canyons on These Trips
Repeater Layout : vertical-2up
Canyons Photography in the American Southwest

Canyons Photography in the American Southwest

Legendary vistas and magical light! Capture stunning images of Bryce, Zion and the Grand Canyon with expert coaching from our Photo Expedition Leader.
9 Days / May & Sep, From $5995
From
Photo Departures Available
Travel Stories