The Busanga Plains within Zambia's remote Kafue National Park is extremely remote and secluded. Getting there from the capital city of Lusaka takes a 1.5-hour light aircraft flight over plumes of burning grass and scattered villages, and then over an unblemished wilderness of thick forests and meandering rivers, until you arrive at a dirt airstrip that appears as a surprising solitary line in the wilderness.

An hour later, as we approached our camp by Landcruiser an hour later, the occasional thicket suddenly opened up into a vast savanna that seemed to rival the Serengeti; this too was an "endless plain." With only two safari camps encompassing just 10 tented units in this area, the scene was completely devoid of other vehicles and full of grazing herds of puku.

The famous male lion brothers—the Busanga Boys—had recently been driven off by two younger male brothers, which were now in control of two of females that were hunting successfully on these large herds of antelope. Birds scattered in front of our vehicle with a flurry of action and color. Kafue National Park was incredible to see,  reminding me of my first awe-inspired reaction to Botswana more than 15 years ago. 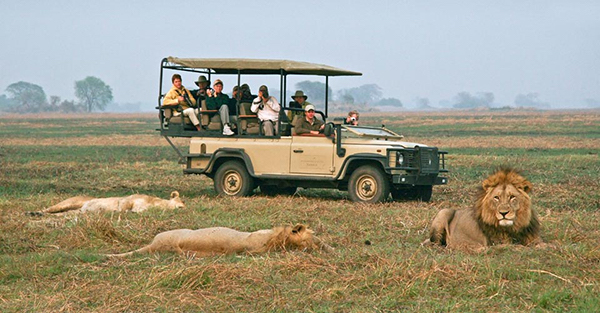 While Zambia remains off the radar for all but the most inspired safari travelers in southern Africa, I don’t believe that it should—or that it will for too much longer. There are too many natural treasures here to keep this unspoiled corner of Zambia quiet in safari circles. Whether that is 1, 5 or 10 years from now, I see Zambia—and Kafue in particular—being the next most desirable destination in Africa.

I can’t travel to Zambia again!

Scout for the Big Five and more on this small-group, big-game safari through private and uncrowded sectors of South Africa's greatest wildlife reserves.