It was day seven of our 10-day Secluded Botswana Safari, and we were staying at a remote tent camp in the Okavango Delta that we had accessed via a bush flight. We enjoyed high tea at camp and were headed out to a new area for our evening ride. Our Expedition Leader, Thuto Moutloatse, thought he might be able to find some African wild dogs in an area we hadn't yet explored. He was examining tracks in the dirt road when his radio crackled to life. 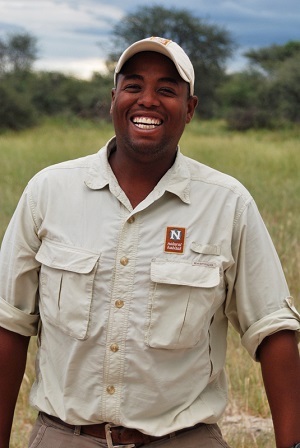 Nature, the camp boss where we were staying, had spotted a leopard walking through camp and promptly tasked two staff members to track it. Ever ready to respond to predator sightings, Thuto asked us if we were interested in a fast drive back to try to see it. We replied in the affirmative, and he advised us to "Hold on!" and "Mind the branches!" since it would be a "Kalahari Ferrari Safari." With his trademark grin, in a moment we were racing back the way we had come.

In the preceding days, I had grown to respect Thuto's ability to drive these bush roads quickly without compromising our safety. As he swung the vehicle around curves and through ruts, sand branches, he would call out "impala" or "zebra"—sightings that were a blur to us, and we weren't driving! We still had to do our part in holding on and ducking the branches that couldn't be avoided.

As we approached , Thuto veered off into , following the general directions that the trackers had given him. We soon saw their vehicle and took over the pursuit. It was late afternoon by now, and the leopard was quietly walking through the bush looking for opportunities. We watched in awe as the leopard ran up a tree, bounded onto a snag, and tried unsuccessfully to catch a squirrel.

With the sun going down, we continued to follow the leopard through the thick brush toward a herd of impala. Suddenly, we heard a loud hissing. A flat tire! Thuto got out and, after a quick look around, gave us the "all clear." As we climbed out, we heard the impalas' distinctive alarm reports—loud snorts that told us the leopard's cover was blown. There would be no impala feast for him, at least not then. 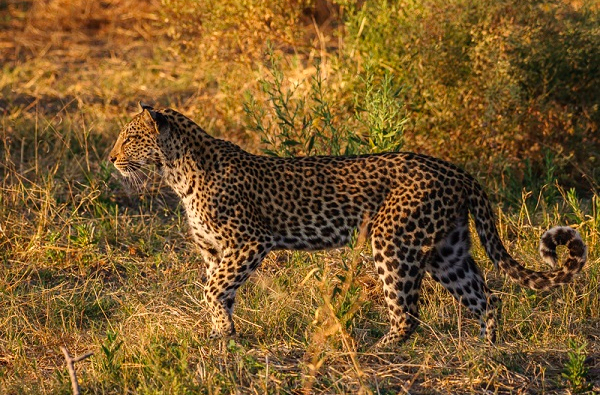 I offered to help with the tire, speeding things up as the twilight descended on us. We soon had the spare on and, followed by spectacular evening lighting, we returned to camp at a more leisurely pace while our adrenaline levels returned to normal. We recounted our adventure at yet another wonderful dinner and drinks by the fire. All in a day's journey in Botswana's Okavango Delta!

Our flagship Botswana safari! A truly exclusive wilderness immersion in the Okavango Delta's best private wildlife reserves and beyond, plus Victoria Falls.

Get Weekly Updates
Our weekly eNewsletter highlights new adventures, exclusive offers, webinars, nature news, travel ideas, photography tips and more.
Request Your 2022 Catalog
View Our 2022 Digital Catalog
Send Us a Message
Use the form below to send us a comment or question.
Refer a Friend
Earn rewards for referring your friends! We'd like to thank our loyal travelers for spreading the word. Share your friend's address so we can send a catalog, and if your friend takes a trip as a first-time Nat Hab traveler, you'll receive a $250 Nat Hab gift card you can use toward a future trip or the purchase of Nat Hab gear. To refer a friend, just complete the form below or call us at 800-543-8917. It's that easy! See rules and fine print here
/articles/african-safaris/southern-africa/traveler-story-kalahari-ferrari-safari/
Physical Requirements