Five Can't-Miss Things to Do in Namibia

Mention the word "safari" and most people will probably picture thousands of wildebeest thundering across the Serengeti plains or a leopard prowling through a verdant wildlife oasis like Botswana’s Okavango Delta. Namibia, compared to some of Africa’s better-known safari destinations, isn’t teeming with wildlife, and it certainly isn’t very green. It’s comprised of vast and rugged deserts where remarkable desert-adapted species struggle for survival. Still, its popularity as a safari destination has grown by leaps and bounds in recent years, thanks to its incomparable landscapes, fascinating people and cutting-edge wildlife conservation strategies.

Here are just a few of the many can’t-miss things to do in Namibia:

Located along the Atlantic coast in the northern part of the country, the Skeleton Coast was named for the many shipwrecks that dot the coastline here. The San people, who lived further inland, purportedly referred to it as “The Land God Made in Anger.” No matter what you call it, this otherworldly and hard-to-reach corner of Africa is worth a visit. It has been called the most pristine shoreline in the world and one of the most pristine places left in all of Africa. Dense fogs blanket seemingly endless gravel plains and towering sand dunes for much of the year, and constant, heavy surf batters the beaches where massive seal colonies can be found. Though elephants, rhinos, lions other wildlife can be found roaming the dry riverbeds inland, you probably won’t see a lot of animals. But you will gain a deep appreciation for the remarkable plants and animals that do manage to survive here.

Damaraland Camp is located in the Torra Conservancy and is a good place to spot elephants and black rhinos. © Wilderness Safaris

Namibia’s communal conservancy program is one of Africa’s great conservation success stories. In the 1990s, Namibia’s government enacted innovative new laws that granted local communities the right to manage natural resources and wildlife on communal lands. The idea was that rural communities would manage the resources in a sustainable way if they received the benefits. Two decades later, 71 communal conservancies have been established and 42 percent of Namibia’s land is now under conservation management. As a result, wildlife in Namibia is flourishing: since 1995 the elephant population has doubled, the desert-adapted lion population has quadrupled, and the endangered black rhino has made a remarkable recovery.

Encompassing over 318,000 square miles (roughly the combined size of Texas and Louisiana) and with a population of just 2.2 million people, Namibia is one of the least densely populated nations on Earth. But what it lacks in sheer numbers, it more than makes up for in ethnic diversity and fascinating cultures. The indigenous, pastoral Himba are probably Namibia’s best-known ethnic group. Considered to be Namibia’s last semi-nomadic tribe, the Himba have managed to preserve much of their traditional culture and lifestyle. They are known for their practice of covering themselves in , a red paste made from mixing butterfat and ochre pigment.

Hunters and poachers wiped out 92 percent of the world’s black rhinos in the last three decades. Today, the species is making a comeback in Namibia thanks to farsighted conservation initiatives, including the communal conservancy movement described above, and the growing popularity of rhino tracking among tourists. Simply put, tourists’ dollars provide both the means and the incentive to ensure the ongoing protection of this majestic species. Namibia’s ruggedly beautiful Damaraland desert is home to the greatest concentration of black rhino on Earth. 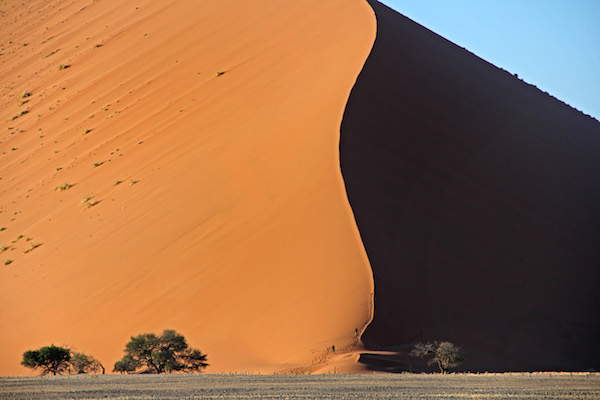 The Namib isn’t the just the world’s oldest desert, it also to tallest sand dunes on Earth. At 1,256 feet, Dune 7, also known as Big Daddy, is the tallest of the tall and is worth a trip to the top. Located in the Sossusvlei area of the Namib-Naukluft National Park, Dune 7 is easy to reach from several safari camps including Kulala Desert Lodge and Little Kulala. For a desert, the area is relatively rich in wildlife. Keep an eye out for oryx, springbok, jackal ostrich.

From coastal desert to towering sand dunes and rocky gorges, Namibia showcases some of Africa's most diverse geography and remarkable wildlife—see it from our secluded luxury camps.