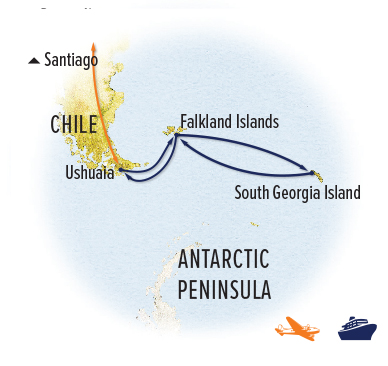 Please Note: This itinerary covers 2023 and 2024 departures that begin and end in Buenos Aires. Our 2022 departure begins and ends in Santiago. Please reference our Dates, Prices & Info page for itinerary specifics, or call us for details. Flexibility is a hallmark of these expedition cruises, and the day-to-day itinerary may change as we adapt to weather and local conditions, taking advantage of rare wildlife sightings or allowing photographers to linger ashore when the light is especially good.

Days 1 & 2: Overnight Flight to Buenos Aires, Argentina / City Tour
After an early morning arrival in Buenos Aires, check in to our deluxe accommodations in Argentina's beguiling capital. Founded by Spanish colonizers in the 16th century, the city became an important trade hub and later boomed with the arrival of many Italian, Spanish and Eastern European immigrants in the late 19th and early 20th centuries. It retains a distinctly European character today, and our afternoon city tour showcases its vibrant cultural melange, passing grand Beaux Arts landmarks and famous the Presidential Palace balcony from which Eva Peron gave her riveting final speech in 1951. Get acquainted with your fellow travelers during an early evening reception at the hotel.

Day 3: Buenos Aires / Ushuaia, Argentina—Embark
Fly south to Ushuaia, crossing the peaks of Patagonia before landing at the bottom of Tierra del Fuego. There’s no mistaking the "end of the world" feeling about this most southerly city, which is a point of embarkation for many expeditions to Antarctica. Have lunch on a catamaran cruise in the Beagle Channel, flanked by mountains rising out of the sea on either side, before embarking ship to set sail in the South Atlantic.

Day 4: At Sea in the South Atlantic
Settle into shipboard life, with a day at sea as an opportunity to relax and learn. Our expedition ship carries a full complement of naturalists, scientists and historians who are eager to share information about geology, climate, wildlife and human exploration in the southern polar region. Lectures and slideshows add to our appreciation of all we see and experience during the voyage. Today, they prepare us for our visit to the Falkland Islands. Meanwhile, our crossing of the South Atlantic should provide ample opportunities to witness seabirds from on deck, including petrels, penguins and the black-browed albatross boasting a wingspan of more than 7 feet.

Days 5 & 6: Exploring the Outer Falklands
Also called Islas Malvinas by Argentina, which contests Britain for claim to the colony, this windswept archipelago is a study in stone, sand and peat. Defined by rugged cliffs battered by the ocean, wild moors of waving tussock grass, and white sand beaches, its isolated shores are home to marine mammals and prodigious birdlife, including the world’s largest albatross colony—birds that boast an 11-foot wingspan. Flightless steamer ducks, blue-eyed shags and three penguin species, including Magellanic, gentoo and rockhopper, are abundant, and Peale's dolphins often ride our bow waves near the islands. Look, too, for fur seals bobbing alongside.

Days 7 & 8: At Sea
Continue sailing southeast, with whales swimming below and seabirds circling above and bobbing in our wake. Our naturalists help identify the birds that follow us, which are likely to include wandering albatross, prions and black-browed albatross. The ship’s interpretive team prepares us for exciting days ahead with presentations about South Georgia’s flora, fauna, geology and the history of Antarctic exploration, highlighting the inspiring story of Ernest Shackleton and the ill-fated crew of the Endurance. Take advantage of the ship’s leisure and recreation opportunities, including a fitness center, sauna, massage therapy at the spa, and a library filled with books about Antarctic natural history and polar exploration.

Days 9–14: South Georgia Island
Remote South Georgia is known for its whaling heritage and the riveting saga of Sir Ernest Shackleton’s ill-fated 1914 expedition aboard the sailing ship Endurance. The magnitude of Shackleton’s heroic trek across South Georgia to secure the rescue of his crew can only be fully grasped on a visit to the island, with its spine of glaciated peaks rising precipitously from the sea. J. Gunnar Anderson, who encountered the island in 1902, described it as “mighty fells with snowy crowns and sharp, uncovered teeth, around the valleys through which enormous, broad rivers of ice came flowing to the sea.” Yet the land, for all its rugged austerity, abounds in animal life.

Explore the spectacular coastline, with flexible opportunities for walking, hiking, kayaking and Zodiac excursions that grant access to desolate beaches and glacier-carved fjords where curious fur seals often approach our boats. South Georgia, the “Serengeti of the Southern Ocean,” offers a wildlife extravaganza: most famously, millions of king penguins live in vast, squawking colonies that stretch to the horizon, and we walk among tens of thousands of them on the beach. Gentoo and macaroni penguins are also abundant. Enormous snorting elephant seals congregate on the beach. South Georgia’s waters are home to blue, sperm, fin, sei and southern right whales, though they were nearly wiped out in the 20th century when whaling was still a commercial industry. At the former whaling outpost of Grytviken, abandoned processing factories lie derelict, and elephant seals have taken over the grounds. Those who wish to pay respects to the legendary explorer can visit the grave of Shackleton, who died here in 1922.

Days 15–17: At Sea / Stanley, Falkland Islands
With time to relax at sea, head up to the bridge to observe expert navigational skills at work as our captain and officers sail these history-laden waters. Take advantage of community spaces including the lounge, the observation room with its game collection and binoculars, and the library, with an impressive collection of titles on regional natural history and polar exploration. And enjoy presentations from our staff, reflecting on the many wonders we have encountered.

On Day 17, our journey back across the South Atlantic returns us to the Falklands. In the afternoon, explore the photogenic capital of Stanley, once an important port for refueling steamships traveling around Cape Horn before the Panama Canal opened. Our visit offers a chance to see the human face of the islands, to meet the hospitable residents, hoist a drink at a local pub, and wander around this remote colonial outpost town. Though the Falklands are still disputed territory, they are culturally British through and through. English and Scottish immigrants arrived with sheep in the 19th century, and wool is produced to this day. Stanley offers a quaint study, with its tin-roofed houses, rose gardens, pubs and other emblems of British heritage, including an Anglican cathedral with an organic whalebone archway.

Days 18 & 19: Ushuaia, Argentina—Disembark / Buenos Aires / Depart
After breakfast, disembark ship in Ushuaia, then transfer to the airport to fly to Buenos Aires by private charter. From Buenos Aires, connect with onward flights, which are typically overnight itineraries that arrive in North America the next day.