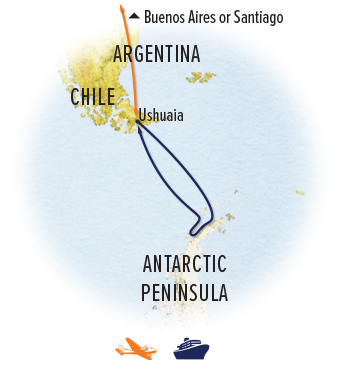 With an early morning arrival in Buenos Aires, Explorer guests are transferred to the Alvear Art Hotel (or similar), and Endurance guests are transferred to the Alvear Icon Hotel (or similar), to check in. Buenos Aires, Argentina’s sophisticated capital, is one of Latin America’s largest metropolitan areas and a top tourist destination for its cosmopolitan lifestyle, vibrant cultural melange and European-style architecture reflecting its colonial heritage and the influence of many 19th- and early-20th-century immigrants. After a morning at leisure to rest up and relax, enjoy a guided afternoon tour, including Beaux Arts palaces, grand and Eva Peron’s famous balcony.

After an early morning arrival in Chile's capital of Santiago, Resolution guests check in at the centrally located Hotel Santiago by Mandarin (or similar). Santiago is nearly surrounded by the Andes, which form an inspiring backdrop for an afternoon tour of this energetic city. After a relaxing morning, we explore the Plaza de Armas, the main and nearby Presidential Palace, taking in expansive views from Santiago's many hills and parks.

Day 3: Buenos Aires, Argentina or Santiago, Chile / Ushuaia, Argentina—Embark Ship
Take a private chartered flight to Ushuaia, Argentina this morning, surveying the peaks of Patagonia below before landing at the bottom of Tierra del Fuego, the foot of the southern Andes. There’s no mistaking the "end of the world" feel of the planet’s most southerly city, which is the point of embarkation for expeditions to the Antarctic Peninsula. If weather permits, we will have lunch on a catamaran cruise in the Beagle Channel, where steep mountains rise straight out of the sea, before we embark ship and set sail on a southward course.

Day 4: At Sea—Crossing the Drake Passage
The Drake Passage is legendary among mariners and a milestone in any adventurer's personal travel history. Named for the 16th-century English privateer Sir Francis Drake, whose ship was blown far off course in these challenging waters, this 600-mile-wide channel that separates Cape Horn from the Antarctic Peninsula is notorious for its frequent high winds and rough seas. Without a significant land mass, the Antarctic Circumpolar Current flows unimpeded, carrying a tremendous volume of water through the passage. Midway across, the Antarctic Convergence mixes cold, northward-flowing waters with the relatively warmer south-flowing waters, creating a highly productive marine zone for Antarctic krill, the favored food source for whales, seals, penguins, squid, albatrosses and other seabirds. Our ship is likely to be escorted through the passage by resident wildlife, including dolphins, Cape petrels and wandering albatrosses.

Days 5–10: Exploring the Antarctic Peninsula
With nearly perpetual daylight on this classic Antarctic expedition, we make the most of the long days by keeping a flexible schedule to take advantage of the unexpected—perhaps watching a 40-ton whale surface off the bow, studying a particularly cinematic bobbing iceberg, or observing the ship crunch through pack ice. On our daily excursions, we make Zodiac forays among towering icebergs, walk the shorelines amid huge colonies of penguins, hike to a summit for a commanding view, and kayak along cliffside rookeries to look at blue-eyed shags. Millions of animals thrive here, and visitors find a rich assortment of marine life including Weddell, Southern elephant, crabeater and leopard seals, and minke, humpback, sei and fin whales, as well as orcas. A proliferation of seabirds includes kelp gulls, various petrels, snowy sheathbills, skuas, shags and Antarctic terns. Zodiacs allow us to get close to wildlife and make shore landings, where we walk among noisy colonies of four resident penguin species—chinstrap, emperor, and A. Learn from our experts how to identify penguins and get photo tips from a National Geographic-certified photography instructor to help you capture the best possible memories. On board, our undersea specialist may present video from any day’s dive—rare images up to a thousand feet below the surface using our Remote Operating Vehicle (ROV).

Days 11 & 12: At Sea
Making the return voyage across the Drake Passage, our days at sea are an opportunity to learn and relax. The ship sails with a full staff of onboard naturalists, scientists and historians who are eager to reflect upon the geology, and wildlife of Antarctica that we have witnessed, as well as the riveting human history of the White Continent, from early explorers to present-day researchers. Take advantage of the ship’s leisure and recreation opportunities, including a fitness center, sauna, massage therapy at the spa, and a library filled with books about Antarctic natural history and polar exploration. Our escorts while crossing these legendary seas will surely include a host of marine life and seabirds, including the black-browed albatross which boasts a wingspan of more than 7 feet.

Days 13 & 14: Ushuaia—Disembark / Buenos Aires, Argentina or Santiago, Chile / Depart
After a last breakfast on board, disembark in Ushuaia. There's time to explore this adventure-focused mountain town before our private chartered flight returns you to Buenos Aires or Santiago (the same destination where you started your expedition) to meet homeward flights.