Sail from Ushuaia to Antarctica and Fly Back to Punta Arenas 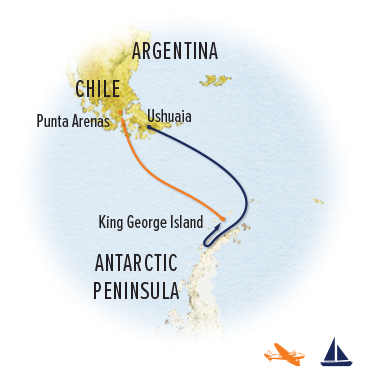 Please note: Alternating dates will operate in reverse direction, flying from Punta Arenas to King George Island and sailing from the Antarctic Peninsula back to Ushuaia on the return journey.

Day 1: Ushuaia, Argentina
Arrive in the world's southernmost city, Ushuaia, located at the tip of Tierra del Fuego. Meet your Expedition Leader and fellow adventurers at a welcome dinner this evening.

Day 2: Tierra del Fuego National Park / Maritime & Presidio Museums
This extra day in Ushuaia is included as a "reserve day" if flights are delayed. You don't want to take a chance of missing your sailing tomorrow! But there's plenty to see in the Ushuaia region, too. We've included a half-day tour of scenic Tierra del Fuego National Park, which combines coast, islands, mountains and the southernmost subantarctic Andean forests. Beneath the deciduous lenga, beech and wild cherry trees, we find a moist understory of moss, ferns and peat bog. On easy hikes, look for red fox, guanaco, otter, geese, ducks, woodpeckers and 90 more bird species that are among the native fauna found in the park. The landscape shows typical signs of glacial formation, with broad valleys filled with lakes and rivers alternating between rows of mountain ranges. Throughout the park are signs of its past inhabitants, the Yamanas people.

Following lunch in town, we visit the impressive Maritime and Prison museums, housed in the former national penitentiary built by convicts who were relocated to this remote region in 1906. The infamous prison, finished in 1920, was designed for 380 inmates, though it held up to 800 before it closed in 1947. The maritime exhibits chronicle the history of seafaring in the area, including a scale model of the ship Magellan sailed in 1520 through the strait that now bears his name. It was Magellan who dubbed this southerly mosaic of islands Tierra del Fuego, meaning "Land of Fire"—a reference to constantly burning fires Indigenous people lit to stay warm, even inside their bark canoes. There's free time later this afternoon to explore Ushuaia, a lively tourist town catering to the many adventurous climbers, trekkers and sailors that set forth from here. We'll enjoy dinner together in town this evening.

Day 3: Ushuaia—Board Hanse Explorer / Beagle Channel
This morning we board our expedition yacht, the Hanse Explorer. Built to navigate the daunting conditions in the world's polar regions, this elegant small ship has been designed with every conceivable amenity to make the experience comfortable and inspiring. After introductions and a safety orientation, we set out into the calm waters of the Beagle Channel. Drink in the views of Patagonian peaks on either side as we make our way south, savoring the long daylight of a southern summer.

Days 4 & 5: Crossing the Drake Passage
With an eminent polar mariner, seasoned crew and our naturalist Expedition Leader at the helm, we continue into the open waters of the Southern Ocean and the legendary Drake Passage. Named for renowned explorer Sir Francis Drake who sailed these waters in 1578, the Drake is notorious for its often-fierce gales, creating large, wind-whipped swells. But the Hanse Explorer is a hardy vessel, and we are in good hands, embracing a journey that is sure to be exhilarating. The southern portion of the Drake also marks the Antarctic Convergence, a biological zone where a great upwelling of nutrients draws an amazing variety of seabirds, including many albatrosses that follow in our wake. The first sightings of icebergs and snow-clad mountains indicate that we have reached the South Shetland Islands. The exact timing of our 600-mile Drake crossing depends on weather and sea conditions, but we generally expect it to take approximately two days.

Days 6–11: Exploring the Antarctic Peninsula by Luxury Expedition Yacht
Once we reach the South Shetlands, we'll step ashore for our first encounter with penguins and other wildlife of this southern polar wonderland. For the week to come, we follow the best weather and safest water, exploring the remote bays and fjords of the Antarctic Peninsula. Nothing prepares us for the scale and scope of this icebound wilderness, and the phrase "awe-inspiring" takes on totally new meaning here. Walls of blue ice rise 300 feet from the surface of the steel-gray sea, and it is as if the entire landscape is one massive glacier. Though our environs are austere, these waters are a haven for a remarkable collection of wildlife, including vast penguin rookeries and beaches ruled by Antarctic fur seals and southern elephant seals. Taking advantage of the perpetual light, we spend long days cruising among the icebergs, watching for whales and seals. Sometimes, we get so close we can hear a whale blow, and we may even feel the spray from its spout. Birdlife is extraordinary, with huge populations of albatross, petrel, skua, gull, tern and cormorant.

After each monumental day, settle into the exceptional comfort and hospitality provided on board the Hanse Explorer. Relax with a cocktail in the lounge, or if you're not quite ready to retreat from the open air, take a soak in the hot tub on the top deck and watch the iceberg parade drift past. Each evening, the chef and culinary team prepare memorable dinners, while the expanse of windows in the dining room ensures you won't miss a thing happening beyond. With the late light of the austral summer lingering until well after dinner, it's tough to pull away from the magnificent scenery surrounding our ship, but a restorative night's sleep awaits in well-appointed staterooms, renewing us for the next day's slate of adventures.

On our last day of exploration, we land at King George Island in the South Shetland group, which has the only airstrip in the Antarctic Peninsula archipelago that can reliably be served to and from the South American continent. Our arrival is scheduled for one day prior to our intended flight to Punta Arenas, as a hedge against potential weather problems.

Day 12: King George Island / Fly to Punta Arenas,  Chile
Our extraordinary shipboard adventure comes to a close today as we say farewell to our yacht, captain and hospitable crew. Weather permitting, we board our airplane for the two-hour flight to Punta Arenas on the southern tip of Chilean Patagonia. Overlooking the Strait of Magellan, Punta Arenas was a gold rush boomtown in the late 19th century. On arrival, we check in to our hotel. This evening, enjoy a farewell dinner in town, regaling one another with stories and indelible memories of this truly singular adventure.

Day 13: Punta Arenas / Depart
Fly homeward today from Punta Arenas, with a cache of memories to last a lifetime and then some!

Important note regarding flights: When flying to and from King George Island off the Antarctic Peninsula, weather determines all schedules. If weather does not allow us to travel as scheduled, we must wait until until it clears, or other times, we may push up the flight to be ahead of weather. Though historic weather patterns indicate that we should not be delayed for more than a few days, we can never predict when, or even if, inclement weather will clear to allow our departure. While we have "padded" our itinerary somewhat as a precaution against such circumstances, we ask that all guests purchase trip cancellation and interruption insurance to cover tour costs should your adventure be delayed or canceled because of weather.