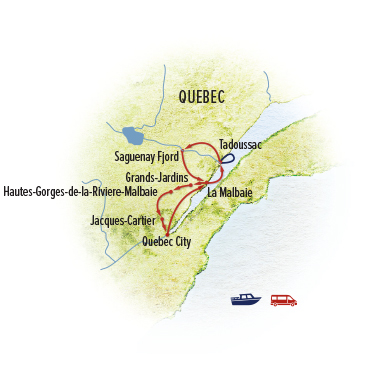 Arrive in Quebec City. The only intact fortified city in North America north of Mexico, Quebec City is one of the oldest settlements in North America, founded in 1608 by French explorer Samuel de Champlain. Old Quebec—the city’s original quarter, once the capital of New France—is a UNESCO World Heritage Site, contained within still-standing ramparts, bastions and gates. From our boutique hotel in the heart of Old Town, step out onto cobblestone lanes and wander down Rue de Petit-Champlain, North America’s oldest shopping street. This evening, gather with our Expedition Leaders for a welcome dinner.

Day 2: Quebec City / Whale Watching in Saguenay-St. Lawrence Marine Park / Tadoussac
This morning we follow a scenic route up the St. Lawrence River at the base of the Laurentian Hills, passing through charming coastal villages including colorful Baie St. Paul, one of the oldest communities in Quebec and best known as the birthplace of Cirque du Soleil, where a troupe of street performers got their start in the 1980s. After lunch along the way, arrive in Baie-Sainte-Catherine where we board Zodiacs for our first whale-watching excursion in Saguenay-St. Lawrence Marine Park.

From May through October, five whale species commonly frequent this zone where the Saguenay River meets the St. Lawrence Estuary. This confluence of waters from the Great Lakes, Saguenay Basin and Atlantic Ocean fosters an exceptionally rich food chain, sustaining creatures from microscopic zooplankton to the world’s largest animal, the blue whale. Look also for humpback, fin, minke and beluga whales, plus harbor porpoise and several seal species. Across the Saguenay River lies the Hotel Tadoussac, and we reach it via Zodiac, enjoying the dramatic approach from the water. (Our bags will be waiting in our rooms, having arrived earlier while we were whale watching.) Once we're settled in, we head into the town of Tadoussac for dinner. At the the mouth of Saguenay Fjord, Tadoussac is the site of the first French fur trading post in North America, established in 1599 along a longstanding aboriginal trade route connecting the St. Lawrence River with Hudson Bay.

Day 3: Private Whale Watching Tour / Saguenay Fjord National Park
This morning we head to Marina de Bergeronnes for a private whale-watching trip in the marine park. Among the whales we hope to encounter is the endangered St. Lawrence beluga, the only marine mammal, along with the harbor seal, to live in the estuary year-round. Our local boat operator is owned and run by the Indigenous Innu community, and our skipper's background and stories add a rich dimension to our experience of this marine realm and its giant inhabitants. Our operator is also part of the Eco-Whale Alliance, which helps fund research and education projects on the whales of the St. Lawrence. After lunch, we head inland to hike and explore in Saguenay Fjord National Park. The Saguenay River drains into this 65-mile-long gash in the Canadian Shield, hemmed by rock walls nearly a thousand feet high. The fjord was formed at the end of the last Ice Age, when the glacier-gouged valley was inundated by the sea as the ice collapsed. Though wildlife is elusive, the park’s forests are home to wolves, black bears, lynx, moose and beavers, and several breeding pairs of peregrine falcons inhabit the high cliffs.

Day 4: Private Whale Watching Tour / La Malbaie
After a final morning of private whale watching, drive to La Malbaie to spend the night. La Malbaie is regarded as the birthplace of resort tourism in Canada, drawing wealthy Canadian and American families who summered here at grand estates in the 19th century. Our hotel overlooking the St. Lawrence River, the Fairmont Le Manoir Richelieu, harks back to that tradition. The original 1899 hotel built by Canada Steamship Lines to attract well-heeled guests to the region burned to the ground in 1928. It was replaced a year later by the current grand chateau, built in the style of a French castle.

Day 5: Hautes-Gorges-de-la-Riviere-Malbaie National Park
Today we discover one of Canada’s most dramatic natural landscapes, Parc National des Hautes-Gorges-de-la-Rivière-Malbaie, which is a centerpiece of the Charlevoix Biosphere Reserve. A testament to the titanic forces of nature that shaped it, the park is named for a series of deep glacier-carved gorges cut into a high mountain range above the Malbaie River. These are among the tallest rock faces east of the Rockies, with steep, densely forested slopes that sweep down to the narrow blue ribbon of river. Among the predominant fir and birch are stands of ash and sugar maple, which create a bold mosaic of color in autumn. Lakes dot the plateau and valley floor, and waterfalls plummet from cliffs on high. Vegetation zones change with the altitude, with varied species inhabiting each, from white-tailed deer that we may see in lowland valleys to more hidden animals at higher elevations, including moose in the boreal forest and caribou on the alpine tundra. Golden eagles and peregrine falcons frequent the cliffs, while osprey fish in the rivers far below. Cars are not permitted in the park, and we enjoy peace and quiet as we explore on foot and by kayak. We'll stop for a picnic lunch in the park before returning to La Malbaie late this afternoon.

Day 6: Grands-Jardins National Park / Lac Delage
Spend the first half of the day exploring Grands-Jardins National Park, a core element of the Charlevoix Biosphere Reserve. The park’s name—“great gardens”— refers to its expansive carpets of ground lichen, ancient boreal forest and arctic vegetation not typically found at this latitude. Massive rock peaks jut up through the northern flora, and from their summits the vast footprint of the Charlevoix crater is visible, a 33-mile-wide impact zone formed by a massive meteorite 360 million years ago. With 60 lakes and a healthy native trout population, the park is a celebrated fishing destination. On hikes, we investigate a sampler of the various vegetation zones—taiga, tundra, deciduous forest, boreal forest and alpine—and we get a lake-level view from a canoe. The park is a haven for wildlife—keep an eye out for some of its resident species including woodland caribou, black bear, gray wolf, red fox, porcupine, lynx, common loon and spruce grouse. This afternoon, we make a scenic 2.5-hour drive to Lac Delage to reach our hotel, which overlooks the shimmering blue lake surrounded by the variegated colors of the hardwood forest.

Day 7: Jacques-Cartier National Park / Lac Delage
Just north of Lac Delage is Jacques-Cartier National Park, the last of the five Quebec nature reserves on our itinerary. Named for the French navigator who explored the St. Lawrence River in the 16th century, the park is yet another grand landscape within the Laurentian massif, and we discover it on foot. The 230-square-mile preserve is defined by a vast mountainous plateau cut by deep glacial troughs, including the massive U-shaped swath of Jacques-Cartier Valley. The Jacques-Cartier River, serene in places and turbulent in others, has sliced an 1,800-foot-deep channel into the plateau. The river holds Atlantic salmon, brook trout and Arctic char, which also entice anglers to the park's lakes. Atop the plateau we find boreal forest, dominated by black spruce, while the valley holds mainly deciduous trees such as sugar maple and yellow birch. Wildlife abounds in the park, including more than 130 bird species. Among the animals we might spot are white-tailed deer, beaver, river otter, red fox and porcupine. This land became a conservation priority when the Laurentian Wildlife Reserve was created in 1895, forming the basis for the park that was established in 1981. Return to Lac Delage for a farewell dinner.

Day 8: Quebec City / Depart
After breakfast, depart for the airport in Quebec City, less than 30 minutes' drive from Lac Delage.