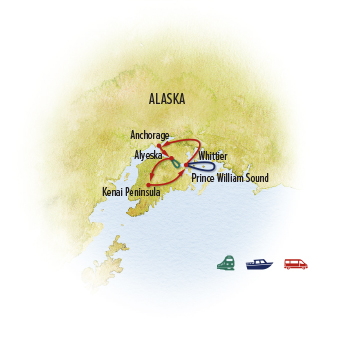 Day 1: Anchorage, Alaska / Alyeska
Flying over the expanse of Cook Inlet with the Alaska Range rising beyond, land at Anchorage International Airport no later than 3:30 pm, where we meet our Expedition Leader. Leaving the city quickly behind, we head south to Girdwood and our destination of Alyeska, following Turnagain Arm. This 45-mile inlet is famous for its bore tide, one of the biggest in the world, which rushes back into the fjord’s exposed mud flats as a wall of water moving 10-15 miles per hour. Keep an eye out for beluga whales near the mouth of Turnagain Arm when the salmon are running in late summer.

Alyeska, roughly an hour southeast of Anchorage, is Alaska’s premier ski area, offering a host of summer outdoor activities as well. Set in a lush glacial valley in the Chugach Range, Alyeska lies within the northernmost temperate rain forest in North America. We spend two nights at the deluxe Alyeska Resort at the base of the mountain. Time permitting, ride the tram to the alpine summit, with vistas of seven glaciers, snow-clad peaks and the glacial-fed inlet far below.

Day 2: Alaska Railroad to Spencer Glacier / Placer River Float
Begin the day with a hike through North America's northernmost rain forest to Winner Creek Gorge, on an easy trail that begins just out the hotel's back door. Our Expedition Leader points out the varied vegetation along path, from towering Sitka spruce and western hemlock trees to giant devil's club, salmonberry and thimbleberry bushes. We then transfer to the railway platform in Portage to board the historic Alaska Railroad for a journey deeper into the Chugach Range. About 10 miles up the Placer River Valley, we reach the Spencer Glacier Whistle Stop, where we disembark to enter a lush tract of remote roadless wilderness. Created in partnership with the Chugach National Forest, this rail spur expands access to some of Southcentral Alaska's most beautiful coastal mountain terrain, with views of valley glaciers, waterfalls, deep canyons and dense deciduous forest on either side of the train.

Flowing down from the icefield above, Spencer Glacier terminates in the meltwater lake of the same name, famed for its flotilla of blue icebergs calved from the glacier's towering face. The site is a living laboratory in which to witness the effects of climate change, with the glacier receding rapidly in recent years and spawning a tremendous amount of ice during warmer summers. We board a stable raft to float among the icebergs on Spencer Lake, getting a close-up view on just how much lies below the surface of each whimsically shaped ice sculpture drifting on the lake. The mellow Placer River has its source in Spencer Lake, and our raft guide steers us into its flow, turbid with glacial silt. It's a rare chance to sit back and soak up the quiet, listening to the gentle waves lap the hull, observing the different braided channels of the river's ever-shifting course, and watching for possible moose, black bear or bald eagle sightings along the banks. Late this afternoon, return to Alyeska by rail and road.

Days 3 & 4: Kenai Peninsula—Summit Lake / Skilak Lake / Glacier Flightseeing
This morning, more dramatic scenery unfolds on the drive to the Kenai Peninsula. We follow the scenic Seward Highway through the Kenai Mountains–Turnagain Arm National Heritage Area, a designation that recognizes the region's unique cultural, geographic and historical features. Our destination is a historic log lodge and cabins on Summit Lake, an authentic piece of “Alaskana.” From this base, we have access to the Kenai’s varied ecosystems, from low-elevation temperate rain forest to boreal forest in the interior and tundra-covered alpine heights. The nearby Kenai River is one of the world’s most famous salmon streams, attracting anglers from all over the world. Explore the little-visited Skilak Lake area, with views across its vast turquoise expanse, and a portion of the Kenai National Wildlife Refuge, which protects nearly 2 million acres of wildlife habitat, including the western slopes of the Kenai Mountains, forested lowlands, rivers, wetlands and chains of lakes. This diverse mosaic of habitats is home to mountain goats, Dall sheep, caribou and elusive wolverine and lynx, as well as moose, wolves and black bears.  On hikes, we stop frequently to study plants, observing how the vegetation zones change from boreal forest to subalpine and alpine habitats.

During our time on the Kenai, we get a feel for authentic Alaskan culture and lifestyles, meeting local people, understanding the history and importance of fishing, and learning about subsistence bush living, including hunting, gathering berries and building homestead cabins. Our guide will reveal some favorite local spots not known to most travelers as we get an insider's perspective on a part of Alaska most visitors don't see. We’ll also gain an aerial view on this rugged wilderness on a floatplane ride, surveying lakes, rivers, ice-crowned peaks and a tapestry of mixed forest—and maybe even some moose or bear from on high.

Day 5: Whittier — Board Sea Star / Cruising Prince William Sound
Drive north this morning to Whittier, a tiny town of 200 on the west edge of Prince William Sound that’s only accessible via a single-lane tunnel through the mountains. Surrounded by pristine wilderness at the head of Passage Canal, Whittier is an important marine access point with an interesting history. Once part of the portage route used by the Chugach native people over the mountains to Prince William Sound, the passage was later used by Russian and American explorers. During World War II, the U.S. Army built a military facility, port and railroad spur, and Whittier became the point of entry for U.S. soldiers deployed to Alaska.

We head down to the marina to meet the Sea Star, the privately chartered classic yacht that will be our floating home for the next three nights. Once aboard, we settle into our cabins and meet for lunch as Sea Star moves out into the sparkling blue waters of Prince William Sound. The sound encompasses 3,800 miles of coastline—a ragged maze of fjords, bays and coves dotted with islands that harbors some of Alaska’s greatest marine wildlife concentrations.

Days 6 & 7: Exploring Prince William Sound
Aboard our chartered yacht, we have complete freedom to explore all the wonders of Prince William Sound on a flexible itinerary. The Chugach Range, which surrounds the sound, is blanketed with a thick temperate rain forest of Sitka spruce and western hemlock, while 150 glaciers crown the peaks above. Seventeen of these are tidewater glaciers, known for their dramatic calving, when massive chunks of ice slough from their towering faces into the sea. More than 220 species of birds, 30 species of land mammals, and at least a dozen marine mammal species are found here. As we nose in and out of coves along the crenellated coast, look for humpback, sei, fin and minke whales, orcas, porpoises, Steller sea lions, harbor seals and abundant sea otters.

At Egg Rocks, visit a boisterous sea lion colony, then get an eye-level view on marine life while kayaking in Shoestring Cove. We also visit Esther Island Salmon Hatchery and Rookery Falls. Explore wild shorelines up close in a small skiff, and step ashore on uninhabited islands to explore empty beaches. With plenty of time to be patient, we wait in front of massive tidewater glaciers to watch shards of ice fall, hitting the water with a thunderous crash. Alone in this primal expanse of elements, where the only sounds are the wind and gulls and lapping water, the power of the wilderness is palpable.

Day 8: Whittier / Alaska Wildlife Conservation Center / Anchorage
After breakfast, Sea Star sets a course back to Whittier, with time to linger among wildlife along the way. Once we disembark, it's time to make the 60-mile drive to Anchorage, starting with a transit of the 2.5-mile Anton Anderson Memorial Tunnel, the longest highway tunnel in North America. Its unique one-lane design is shared by cars and trains traveling both directions on a carefully timed schedule, with cars driving directly atop the railroad tracks. Emerging into the open, we stop at the Begich, Boggs Visitor Center, where Chugach National Forest interpretive staff offer insight into the glacial geology, climate, wildlife and people of the region. The visitor center is located on the shore of Portage Lake, built on the terminal moraine left behind by Portage Glacier almost a century ago. The vista showcases extensive glacial activity, with several hanging glaciers clinging to the peaks that encircle the lake.

Next, we stop at the Alaska Wildlife Conservation Center in Portage to view iconic large mammals up close. With a mission to preserve Alaska’s wildlife through conservation, education, research and care, the center houses orphaned and injured animals in large natural enclosures on the sanctuary’s 200+ acres. Among the many species at home here are brown bears, black bears, lynx, wood bison, moose, elk, muskox, caribou, porcupine, foxes and raptors. Continuing along Turnagain Arm, we stop at Beluga Point in hopes of a glimpse of these small white whales that frequent the inlet, and at Potter Marsh, a vibrant wetland that's part of the Anchorage Coastal Wildlife Refuge. The marsh is a spring and summer mecca for a tremendous variety of waterbirds, shorebirds and seabirds, plus bald eagles that nest in big cottonwoods. Moose and muskrat are often on view as well. Reaching Anchorage late this afternoon, there's time to refresh before our farewell dinner this evening.

Day 9: Anchorage / Depart
Our Alaska adventure concludes this morning with a transfer to the airport.

Please note: Our 2021 Alaska Explorer itinerary concludes on Day 8 with a mid-afternoon arrival at the Anchorage airport. On the 2021 itinerary, we do not visit Begich, Boggs Visitor Center on Day 8, and our visit to the Alaska Wildlife Conservation Center takes place elsewhere in the itinerary.