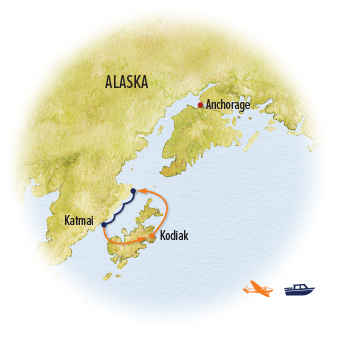 Day 1: Kodiak, Alaska
Once you land at Kodiak airport, our local guide meets you and transfers you to our hotel, pointing out sights along the way. Depending on your arrival time, you may be able to explore some of Kodiak's Russian and Native heritage on your own this afternoon. Options include the Kodiak History Museum, Alutiiq Museum, Holy Resurrection Russian Orthodox Cathedral, Kodiak National Wildlife Refuge Visitors Center and Kodiak Fisheries Research Center Aquarium. All are centrally located in the compact town of Kodiak that surrounds St. Paul's Harbor. Our grizzly photo expedition officially begins this evening with an informal welcome dinner and orientation hosted by our local guide.

Day 2: Fly to Katmai National Park—Board Natural Habitat Ursus
Exciting aerial photo opportunities await on our floatplane journey from Kodiak to Katmai, where we meet our private chartered ship, the Natural Habitat Ursus. Our plan is to fly out late morning, but timing is flexible in the event of weather delays—in which case we'll explore a bit of Kodiak as we wait for clouds to lift. Once we board the plane, we fly west over Kodiak's steep green mountains and across Shelikof Strait to the Katmai Peninsula. Behind the wild shoreline, the ice-crowned peaks of the Aleutian Range rise in a serrated spine, although they are often swathed in clouds. The pilot is in radio contact with the Ursus, and soon we're taxiing on the water to pull up alongside the ship. Exiting the plane, we embark the vessel that will be our floating bear photography base for the next seven nights.

The 73-foot Ursus was built as a deep-sea fishing boat called Time Bandit, which navigated the stormy Bering Sea in pursuit of the lucrative king crab catch. Its successor, the second Time Bandit, gained fame in the Discovery Channel TV series "Deadliest Catch." The original boat was later transitioned for research use by the National Park Service and Alaska Department of Fish and Game. Since retrofitted for custom tourism charters, this sturdy veteran of wild Alaskan waters now offers comfortable guest accommodations in this remote marine wilderness. Bear photography begins in earnest this afternoon as the Ursus (which means "bear" in Latin) cruises slowly along the coastline. In this region we commonly find giant Alaskan brown bears—the world's biggest coastal grizzlies—in abundance, fishing or foraging for clams and sedges, depending on seasonal timing.

Days 3–8: Bear Photography in Katmai National Park
In this roadless area, a small ship allows us access to photograph bears that we could not get any other way. And because we are mobile, we have the flexibility to cruise to wherever the bears are, following them from bay to bay, or moving from one setting to another to see different individuals and varied scenic backdrops. Bring twice the memory capacity you think you'll need, as you won't believe the shots you will get! While we’ve all seen in nature documentaries of Alaskan brown bears in the wild, nothing prepares us for the drama of an actual encounter with these magnificent beasts, often just yards—and sometimes feet—away. They are North America’s largest land predators, and an adult male can weigh 1,000 pounds. As we cruise just off the coast, bears often dot the shoreline. We go ashore by skiff for even closer proximity, exploring the beaches on foot. It’s not uncommon to find several massive grizzlies at once. And far from dozing lethargically, these bears may put on quite a show in their efforts to fill up on enough protein-rich food to prepare for a long winter in hibernation.

The bear activity we witness will vary according to the season, weather conditions, and timing of the salmon runs, but there's always something riveting to watch and photograph. Early in the season, we often see mothers with cubs, providing endless entertainment as they gallivant along the beach. Later, when the salmon start running, we may see bears fight to capture silvery fish in their jaws as they make their way up streams flowing over the intertidal area, swiping out at them with talons as long as a man's fingers. As omnivores, the bears also dig for clams and mussels in the sand and browse on protein-rich sedge grass. Depending on the timing of our visit, we may see bears mating or males sparring over females.

On other Alaska trips, we photograph grizzlies from viewing platforms or vehicles. Not here! In coastal Katmai we are on foot, carefully wandering the area in our small group under the cautious guidance of our Expedition Leader who is not only a professional photography guide but also an expert bear naturalist, providing thorough coaching in safe bear etiquette. Sometimes we see wolves, too, observing their interesting interactions with the bears. While occasionally there may be another boat in the region, we're usually alone in the wilderness, moved by a profound sense of solitude, peace and raw beauty. Suffice it to say this trip offers wildlife photo opportunities that will thrill you beyond expectation!

Day 9: Bear Photography / Return to Kodiak
One last morning is set aside to photograph the grizzlies of Katmai before we plan to fly back to Kodiak later today. Traveling in an open skiff, we head to shore once more, looking for a glimpse of the glaciers that crown the high mountain backdrop above the lonely coast. Typically these peaks are cloaked in clouds while evocative mists weave in and out of the bays, providing the moisture that keeps the Katmai landscape so lush and verdant. Deep ash covered the region after the massive 1912 eruption of Mount Katmai and adjacent Novarupta, and revegetation in the century since has come mostly as a thick blanket of willow and alder bushes, though some stands of spruce thrive as well—keep an eye out for bald eagles in the treetops. Seabirds abound, too—look for kittiwakes, terns, mergansers, pigeon guillemots and black oystercatchers.

On shore, we walk across the tidal flats and gravel bars, possibly fording a few streams to find the best vantage point for a last chance to capture images of the bears. Inevitably, it's going to be hard to leave here. Most travelers never get such an immersion in genuine wilderness, let alone the chance for close-up photos of some of the world's most magnificent carnivores in their natural habitat. We're sure to come away awed by the way the bears allow us into their world, and inspired to protect their future from the very real threats of mining, oil and gas development, climate change and other forces that may impact the ecosystem that sustains them—especially the salmon runs on which they rely. Back in Kodiak, our local guide meets us once more to accompany us on the transfer to our hotel. A farewell dinner is planned at a local restaurant, where fresh seafood is always on the menu, along with other choices.

Day 10: Kodiak / Depart
Fly home today from Kodiak. We recommend booking an afternoon flight departure, in case inclement weather prevents us from returning to Kodiak on Day 9 as planned.

Note: Most float plane flights will depart Kodiak for the Ursus in late morning and return to Kodiak mid-afternoon. The exact times will vary according to weather and other logistical factors.

See more of wild Alaska on a wide-ranging small-group adventure to Alaska's best wildlife spots, including the brown bears of Brooks Falls, the marine life of Kenai Fjords, and the wilderness of Denali National Park.

A small-ship voyage through the narrow channels and fjords of Southeast Alaska's storied Inside Passage—meet wildlife up close in the company of top naturalists.