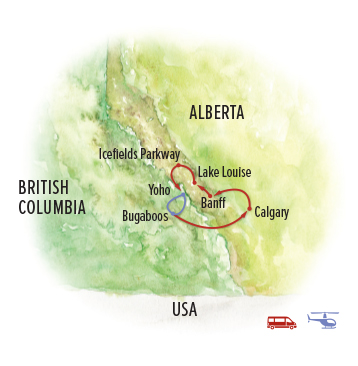 Please note: This itinerary is subject to change, as some departures may visit Lake Louise and Yoho in a different order from what is outlined below. Your precise itinerary will be communicated to you once your trip dates are confirmed.

Day 1: Calgary, Alberta / Banff
Arrive in Calgary, Alberta’s prairie metropolis that blends Old West cowboy heritage with a booming contemporary skyline. Banff lies less than two hours away via a scenic transfer over rolling plains and pine-studded foothills. To the west, the monolithic peaks of the Canadian Rockies rise, an imposing gray barrier dividing the vast plains from range upon range of mountains that extend all the way to the Pacific Ocean. Our boutique hotel awaits in Banff, in the center of this globally acclaimed adventure hub. This evening, meet your Expedition Leader for a welcome dinner in town.

Day 2: Banff National Park—Johnston Canyon / Lake Louise
Established in 1885, Banff is Canada’s first national park, created to protect its incomparable scenery, abundant wildlife and geothermal features. Banff plus six other national and provincial parks in the region comprise the UNESCO Canadian Rocky Mountain World Heritage Site. This morning, we begin our introduction to Banff with a visit to Cave and Basin National Historic Site, the birthplace of Canada's national park system. These geothermal springs have been a special place for Indigenous peoples for over 10,000 years ten thousand years and remain significant today. In 1883, three railway workers found the springs, sparking a series of events that led to the creation of Banff National Park. We'll also learn about the Banff Springs snail, an endangered species found nowhere else on Earth.

Upper and Lower Johnston Falls. One of the region’s most striking natural attractions, the canyon was formed over thousands of years by the erosion of limestone as Johnston Creek courses its way to the Bow River. The canyon provides critical nesting habitat for endangered black swifts, and its steep walls, rushing waterfalls, deep pools and dense forests attract many visitors. Late this afternoon, continue to the Lake Louise area to have dinner and spend the night, although we will not get our first look at the lake until tomorrow.

Day 3: Banff National Park—Moraine Lake / Lake Louise Gondola
Rise early for a quiet sunrise experience of Moraine Lake and the Valley of the Ten Peaks, one of the most famous settings in the Canadian Rockies. The lake's vivid blue-green color is the result of light refracting off the rock flour (fine particles of silt) in the glacier run-off that flows into it. The Rockpile Trail, a short path along the glacial moraine to the top of the natural dam, leads to a vista of the lake and surrounding peaks known as the “Twenty Dollar View,” capturing the scene featured on the back of a former issue of the Canadian $20 bill. Along the forested Lakeshore Trail, we admire striking views of Mount Fay and Fay Glacier. Along with the fir, spruce and pine trees that blanket the valley are thick groves of larches, a deciduous conifer that turns bright gold in fall before it drops its needles. Those who wish may continue hiking to Consolation Lakes, a gentle ascent along Babel Creek to two glistening lakes in an alpine basin.

This afternoon we ride the Lake Louise Summer Gondola for stupendous views of the Canadian Rockies. Look across to jagged peaks iced with glaciers and far below at Lake Louise, a turquoise jewel cradled in a forested valley. The gondola is one of the best places from which to spot grizzly bears, black bears, lynx, moose, mountain goats, elk and deer—don't forget your camera and binoculars! We also visit the Wildlife Interpretive Center, a short walk from the top, to view extensive exhibits about the many animal species that call this region home. Once we descend, continue to the lake itself, backdropped by Victoria Glacier in one of the most exquisite alpine settings in the world. From the shoreline, we have a close-up view of the lake and its storybook environs, including the famous poppy gardens. A walk along the forested trail edging the lake takes us to closer views of Mt. Victoria and Mt. Lefroy, while a gentle climb to Fairview Overlook offers an iconic view of the castle-like hotel that surveys the lake.

Day 4: Icefields Parkway / Glacier Walk on Athabasca Glacier / Field, British Columbia
After breakfast, depart for the Icefields Parkway, one of the world's most scenic drives. Here, the journey is the destination, and we have flexibility to stop when and where we wish at some of the many classic vistas along our route. Near-vertical peaks rise on either side, with waterfalls coursing off glaciers into shadowed gorges. Along the way, we'll visit striking Peyto Lake with its bright turquoise waters tinted by suspended rock flour that pours in from surrounding glaciers. We also stop to admire Bow Glacier reflected in the waters of Bow Lake.

Continuing north, enter Jasper National Park to reach Athabasca Glacier, the largest accessible tongue of ice flowing off the mighty Columbia Icefield, which crowns the Continental Divide. Learn about glacial activity and natural history on a hike to the toe of the rapidly receding glacier, gearing up with trekking poles and microspikes for our feet. We're led by a local Indigenous interpretive guide and outdoor educator who offers rich insight into the natural and cultural history of the icefield region. Then we pick up  the Trans-Canada Highway westward into British Columbia, tracing the route of Canada's rich railway history over Kicking Horse Pass en route to Field, where we spend the night.

Day 5: Yoho National Park—Emerald Lake / Takakkaw Falls
Early risers know that greeting the dawn is the secret to a quiet encounter with the Canadian Rockies, and we head out for an early morning walk around Emerald Lake in nearby Yoho National Park. Emerald Lake is Yoho's most famous gem, set in a tucked-away cirque wrapped by the high peaks of Mount Burgess and Wapta Mountain. Explore its forested shores on a serene stroll with our Expedition Leader, observing the unusual microclimate created by the natural amphitheater that traps moisture, with frequent rain and snow creating lush vegetation, especially on the north-facing mountainsides.

After our walk, we head out to explore more of the park. On the British Columbia side of the Canadian Rockies, Yoho is less well known than neighboring Banff National Park but equally stunning. Its name comes from a Cree Indian word meaning “awe” or “wonder.” Renowned for its vertical rock walls, waterfalls and dizzying peaks, Yoho was sculpted over millennia by ice and water. Witness that power at work on a visit to Takakkaw Falls, Canada's second highest at 1,224 feet. The narrow white ribbon is glacial meltwater from the Waputik Icefield, and it sounds like deafening thunder when the volume is high.

Day 6: Helicopter Flight to Bugaboo Lodge—Alpine Hiking
This morning we make a scenic two-hour drive to the heliport that is our jumping-off point into one of North America's most dramatic wild realms. Crossing into BC, we drop down into the Rocky Mountain Trench, a thousand-mile-long valley on the western flank of the Rockies that extends from northern Montana to the Yukon. In 1807, David Thompson—renowned fur trader, surveyor and mapmaker, and one of Canada's greatest explorers—was tasked by the North West Company to open up a trading route to the Pacific Northwest, and he became the first European to find the confluence of the Kicking Horse and Columbia rivers near the present-day town of Golden. At this juncture, we turn south to follow the Columbia to the helipad near Spillimacheen, where we depart on a 10-minute flight to our wilderness lodge.

In the never-ending jumble of mountain ranges, it's hard to tell we've technically left the Rockies to enter the Columbia Mountains, which are in turn divided into various sub-ranges of which the Bugaboos are a part. Our flight offers a tantalizing preview of what is to come, as we land at our alpine lodge in view of the Bugaboo Spire, one of Canada's most famous alpine rock-climbing challenges. On arrival, the staff provides an orientation before we sit down to lunch, followed by our first heli-hiking excursion. Later, dinner is served in the glass-walled dining room overlooking the peaks and glaciers beyond.

Days 7 & 8: Heli-Hiking in the Bugaboos
Over two more full days, explore a part of the greater Canadian Rockies that very few people get to see. The Columbia Mountains are comprised of the Cariboo, Monashee, Selkirk and Purcell ranges, all of which are world-famous helicopter skiing destinations. Bugaboo Lodge, in the Purcells, was the original heli-ski base, and its summer hiking offerings are equally spectacular. Each morning, we take to the sky to access the awe-inducing heights of Bugaboo Provincial Park. Several guided hikes of varying lengths and ability levels are offered each day. The helicopter provides transfers to remote valleys and high alpine meadows where we walk over trailless terrain, stopping for lunch at a spot of special beauty. Amid the dazzling scenery, keep an eye out for wildlife: we might see marmot, ground squirrel, pika, mountain goat, golden eagles, or possibly moose or grizzly bear. Choose to stay out all day, moving to a different hiking area in the afternoon, or return earlier to relax at the lodge and indulge in the sauna, steam room and hot tub, or book a massage (additional cost) to reward your efforts. Each evening, dinner is served family-style as we join our Expedition Leader and local guides for convivial conversation.

Day 9: Banff / Transfer to Calgary / Depart
After breakfast, depart by helicopter for the helipad in the Columbia Valley, where our private vehicle awaits for a scenic journey back to the Calgary airport for afternoon flights onward.