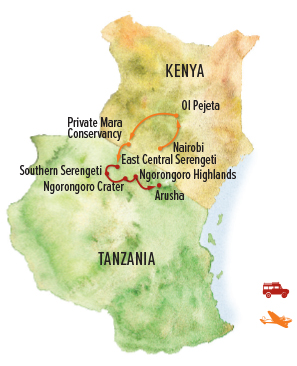 Day 1: Nairobi, Kenya
Our grand East Africa safari begins in the traditional safari capital of Nairobi. From the airport, transfer to the House of Waine, located in the quiet residential suburb of Karen on the outskirts of the city. Originally built as a lavish private estate, the stately home surrounded by lush gardens is one of Nairobi's most elegant boutique hotels. This evening, learn about the adventures ahead during a welcome dinner with our Expedition Leader.

Days 2–4: Ol Pejeta Conservancy—Nat Hab's Private Mobile Camp
Fly north to the renowned Ol Pejeta Conservancy, located on the Laikipia Plateau in the shadow of Mount Kenya. A working cattle ranch established in the 1940s during Kenya's colonial days, Ol Pejeta set aside land for rhino conservation in 1988 and has become a respected trailblazer for conservation innovation. Today it is the largest black rhino sanctuary in East Africa and home to the world’s last two remaining northern white rhinos, a staunchly guarded pair of females that we visit in person. The conservancy is also home to the endangered Grevy's zebra and has some of Kenya's highest predator densities, yet still manages a very successful livestock program.

Ol Pejeta seeks to preserve the exceptional biodiversity within its 90,000 acres while supporting the people living on its borders, to ensure that wildlife conservation translates to better education, healthcare and infrastructure for the next generation of wildlife guardians. In 2014, Ol Pejeta achieved IUCN Green List status, one of only two conservancies in Africa to be so recognized. The Green List aims to define excellence in managing valuable natural areas.

Nat Hab's Private Mobile Camp inside the conservancy is the ideal base from which to explore this diverse wildlife haven that contains many of Kenya's endemic northern species. We'll look for the famous Big Five and much more on day and night wildlife drives and guided walks against the backdrop of snowcapped Mount Kenya. At the end of each exhilarating foray into the bush, return to the comforts of our tented camp, redolent with the ambience of East Africa's classic safari era.

Days 5 & 6: Olderkesi Conservancy—Nat Hab's Private Mobile Camp
Fly this morning to the Maasai Mara, one of Africa’s most legendary wildlife realms. Secluded within the vast private conservancy that borders the Maasai Mara National Reserve, our isolated tented camp is surrounded by all the wonders of the Mara ecosystem without the crowds. With strict limits on guest numbers, the 7,000-acre Olderkesi Community Wildlife Conservancy offers the rare opportunity to experience the Mara’s spectacular wildlife in peaceful seclusion, especially the wildebeest migration. The conservancy serves as a migration corridor for thousands of animals moving between the Maasai Mara National Reserve and the Loita Plains to the east. It is a successful model for how local people are integrating agricultural livelihoods with wildlife protection. By limiting development to certain areas and keeping vast tracts of collectively owned grazing land open and unfenced, Maasai landowners enable wildlife to move freely while also reducing human-wildlife conflict at their homesteads.

As a result, a multitude of species flourishes on the conservancy. Herds of antelope dot the rolling plains while stands of acacia trees shelter prolific birdlife. Rich volcanic soils nurture the grassy savanna where we find more lions per square mile than anywhere else in Kenya. Prolific herds of elephant, giraffe and zebra are also on view. Our activities make the most of our unrivaled access to this wide-open wild country. In addition to daily wildlife drives, enjoy guided bush walks, wilderness picnics, off-road safaris and night drives in search of nocturnal wildlife—exciting activities not permitted in the adjacent national reserve.

Days 7 & 8: East-Central Serengeti
Fly to the eastern side of the Serengeti today for a two-night stay at a remote luxury bush camp. The surrounding environs are dotted with dramatic rocky outcrops, and the sunrise over these granite kopjes is glorious. Shaded by giant acacias, our camp lies where the short-grass plains meet acacia woodlands. The nearby Ngare Nanyuki underground river creates pockets of permanent water that support year-round wildlife concentrations. From this private outpost we can expect unrivaled sightings of the big cats that are so plentiful in this area. Until recently, this area was set aside for scientific research into predators, especially cheetah, but today, we are able to enjoy that same access to this dense feline population. Such close encounters with the Serengeti’s apex predators are sure to enthrall even the most seasoned safari traveler.

Depart this morning for Nat Hab’s private mobile camp in the southern Serengeti, with a game drive en route. Each season, we place our Migration Base Camp in an area the herds are known to frequent. The days of heavy canvas hunting camps set for the likes of Roosevelt and Hemingway were nearly over until photo safaris gained popularity in the 1970s. Our camp is redolent with that vintage atmosphere, with candlelight dinners presented on white linen and nothing between you and the night sounds of the bush but the walls of your tent.

While home to a profusion of wildlife year-round, there is nothing like the Serengeti during the phenomenon of the Great Migration. We spend three days among the sea of mammals, following them in 4x4 vehicles with pop-top roofs that offer superb photography access. During the annual short rains, some 2 million wildebeest trek from Kenya’s Maasai Mara to the southern Serengeti and back again, in search of new grass. They migrate with hundreds of thousands of zebra, whose superior vision serves as an early-warning system for predators. Gazelle and other antelope accompany the huge herds as well.

We are in the region during the time when zebra and wildebeest are giving birth (typically in January and February), and the herds may be mostly stationary. The majority of baby wildebeest are born during a single 3-week window, after most zebra young have emerged, and we’ll hope to see infants, though timing on the calf drop is weather-dependent. Predators seek out the most vulnerable members of the herds, and we may witness a lion seize a sick wildebeest or a cheetah overtaking a newborn that has become separated from its mother. Leopard, hyena and jackal also prey on the migrating herds while vultures hang in the air, waiting to feast on carrion. While the spectacle is at times grim, its primal drama is a wonder to behold.

Day 12: Ngorongoro Conservation Area—Ngorongoro Crater
Enjoy an exciting wildlife drive en route from the plains to the Ngorongoro Conservation Area, with a picnic lunch along the way. Once we reach the crater rim at 7,300 feet above sea level, we’ll descend to the floor and traverse the crater’s expanse en route to our secluded camp on the other side. One of the Seven Natural Wonders of Africa, Ngorongoro Crater is the largest unbroken caldera on Earth. Within its steep 2,000-foot walls that surround the crater floor spanning 12 miles across, we find Africa's densest concentration of wildlife, attracted to the crater's perpetual water sources. By late afternoon we reach our camp, set within lush forest on the crater rim. This optimal location allows us an early entry to the crater tomorrow morning, compared to most visitors who must stay farther away—a real bonus when it comes to coveted safari time here. This evening, enjoy a non-commercialized visit to a Maasai village nearby.

A scenic drive is in store from the plains to the Ngorongoro Highlands, with an afternoon excursion into the famous crater. One of the Seven Natural Wonders of Africa, Ngorongoro Crater is the largest unbroken caldera on Earth—the center of a massive ancient volcano that scientists believe may have been larger than Mount Kilimanjaro. Twelve miles across and 2,000 feet deep, the crater is home to some 30,000 animals that live year-round inside its walls. Because of the crater's permanent supply of fresh water, it sustains the densest concentration of wildlife in Africa. Common sightings include elephant, buffalo, hippo, giraffe, zebra, blue wildebeest, eland, gazelle and waterbuck, while lion and hyena are abundant predators. A glimpse of the rare black rhinoceros is a special prize. Before dinner this evening, make an optional visit to a nearby Maasai village to meet some of the local residents in an authentic setting. The Maasai are the traditional pastoral herders of East Africa's Great Rift Valley, and we’ll have a chance to learn about their lifestyle and enduring customs.

Day 13: Ngorongoro Crater / Ngorongoro Highlands
Make an early second descent into the Ngorongoro Crater this morning. Some 30,000 animals live on the crater floor, a veritable Eden filled with animals nurtured by the abundant resources here. Look for elephant, buffalo, giraffe, zebra, wildebeest, eland, gazelle and the predators that pursue them, including lion, leopard, cheetah and hyena. A glimpse of the rare endangered black rhinoceros may be a special prize. Birdlife is also abundant, with huge flocks of flamingos turning the surface of the soda lakes pink. Spend a full day exploring the crater floor before retreating to the highlands in the late afternoon. If time permits, we may stop along the way to visit a local primary school supported by Natural Habitat Adventures' philanthropy program. Located well off the main road outside the town of Karatu, this community isn't visited by other safari companies, and our tourism dollars make a tremendous difference to the economically challenged students who attend here. Arrive at our elegant lodge in the Ngorongoro Highlands with time to relax amid the manicured grounds surrounded by a working coffee plantation.

Day 14: Arusha / Depart
Our Kenya and Tanzania tour comes to a close as we drive on to Arusha, a lively market city surrounded by coffee plantations in the shadow of Mount Meru. On arrival in Arusha, we have a special farewell lunch and the use of a day room at a secluded lodge surrounded by lush gardens and native forest. Relax in this peaceful setting before transferring to Kilimanjaro Airport for international departures this evening.

Please note: Those booked on our Tarangire extension will continue directly from Ngorongoro to Tarangire National Park for some of Africa's best elephant viewing among giant baobab trees.
Repeater Layout : vertical