Fill out the form below to receive additional information about our Tanzania’s Great Migration & Ngorongoro Crater or give us a call at 800-543-8917. 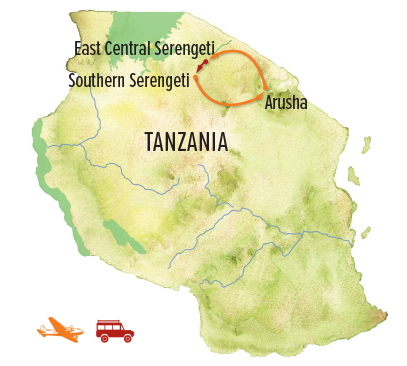 Day 1: Arusha, Tanzania
Arrive at Tanzania's Kilimanjaro Airport and transfer to a peaceful country lodge in the rolling foothills at the base of Mount Meru. Relax amid the  of a 1905 colonial farmhouse and lush gardens, surrounded by mature native forest where colobus and Sykes' monkeys play in the trees. If time permits, take a swim in the pool, ride horseback through the forest, or enjoy a restorative massage in the open-air tent, serenaded by birdsong. As the afternoon wanes, sip a sundowner on the terrace before gathering for a welcome dinner this evening.

Days 2–4: East Central Serengeti
Early this morning we depart for Arusha's domestic airport and our flight to Serengeti National Park. This legendary savanna derives its name from a Maasai word meaning “endless plains,” and these golden grasslands stretching to the horizon under a blue bowl of sky provide an iconic image of East Africa. Meeting our safari vehicles and drivers, we set out on our first wildlife drive. Our destination is a remote sector of the Serengeti previously off-limits to visitors for two decades during a period of habitat rehabilitation to increase the cheetah population. Surveying open range and kopjes—large granite outcrops that dot the plains—the camp offers fabulous wildlife viewing in diverse habitats, particularly of the abundant feline predators that live and hunt in this area.

Ehlane Plains Camp provides exceptional seclusion away from tourist crowds. Ehlane is a Zulu word meaning "wilderness," which is exactly what we experience in this isolated location. Evoking the classic atmosphere of an earlier safari era, the camp's eight canvas tents, shaded by giant acacia trees, offer surprising comforts in this remote setting. Enjoy 360-degree views of wildlife roaming the savanna, plus the river with its perennial vegetation and dense reed beds that attract birds and smaller animals. Thrilling encounters are in store on game drives, while walking safaris offer a more intimate view of the landscape in the company of a resident specialist guide.

Days 5–7: Southern Serengeti—Nat Hab's Private Mobile Camp
Depart this morning for the southern Serengeti with a game drive en route. The days of heavy canvas hunting camps set for the likes of Roosevelt and Hemingway were nearly over until photo safaris gained popularity in the 1970s. Nat Hab's private mobile camp is redolent with vintage character, with fine dinners presented on white linen by candlelight. While home to a profusion of wildlife year-round, there is nothing like the Serengeti during the phenomenon of the Great Migration. We spend three days among the sea of mammals, following them in 4-wheel-drive vehicles with pop-top roofs that offer superb photography access.

During the annual short rains, some 2 million wildebeest trek from Kenya’s Maasai Mara to the southern Serengeti, then back again, in search of new grass. The wildebeest migrate with hundreds of thousands of zebra, whose superior vision  as an early-warning system for predators. Gazelle and other antelope also accompany the herds. We are in the region during the time when zebra and wildebeest are giving birth, and the herds are mostly stationary. The majority of baby wildebeest are born during a single 3-week window, after most zebra young have emerged. We'll hope to see infants (though timing on the calf is weather-dependent), as well as prey interactions. Predators seek out the most vulnerable members of the herds, and we may see a lion seize a sick wildebeest or a cheetah overtake a newborn that has become separated from its mother. Leopard, hyena jackal also prey on the migrating herds while vultures hang in the air, waiting to feast on carrion. While the spectacle is at times grim, its primal drama is a wonder to behold.

Day 8: Arusha or Ngorongoro Extension / Depart
Our safari concludes today, leaving us with a slate of memories to savor forever. After breakfast at camp, we transfer to the nearest airstrip for our flight back to Arusha, where we have lunch on arrival. A day room awaits, offering a chance to relax before a transfer to Kilimanjaro Airport for international departures this evening. Guests continuing on our Ngorongoro Crater extension will say farewell to their fellow travelers in the Serengeti, then continue driving on to the crater in pursuit of further exciting wildlife encounters.

Interested in extending your trip? Link it up with another adventure!
Repeater Layout : vertical-2up
Extra Day in Arusha

Arusha is the jumping-off point for safaris to Tanzania’s famous national parks—a lively city with a temperate climate at the foot of Mount Meru.
1 Day / From $595
Ngorongoro Crater Extension (2021)

Nothing compares to a wildlife drive across the floor of the Ngorongoro Crater, home to Africa's densest concentration of wildlife. From rhinos to lions to pink flamingos, the crater's creatures will delight you.


Click here to see your trip details PDF. You should also receive it by email momentarily.
Ask a Question
Fill out the form below to receive additional information about our Tanzania’s Great Migration & Ngorongoro Crater or give us a call at 800-543-8917.
Download Trip Details
Receive our handy trip PDF by email and have everything you need at your fingertips, including highlights of the trip, itinerary, accommodations, and full details on dates, prices and logistics.