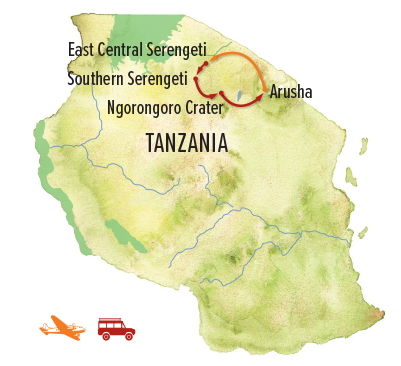 Day 1: Arusha, Tanzania
Arrive at Kilimanjaro Airport and transfer to a peaceful country lodge at the base of Mount Meru. Relax amid the ambience of a 1905 colonial farmhouse and lush gardens, surrounded by mature native forest where colobus and Sykes' monkeys play in the trees. If time permits, take a swim in the pool or enjoy a restorative massage in the open-air tent, serenaded by birdsong. As the afternoon wanes, sip a sundowner on the terrace in view of Mount Kilimanjaro before gathering for a welcome dinner this evening.

Days 2–4: East-Central Serengeti
Early this morning, depart for Arusha's domestic airport and our flight to Serengeti National Park. This legendary savanna derives its name from a Maasai word meaning “endless plains,” and the vista of golden grasslands stretching to the horizon under a blue bowl of sky provides an iconic image of East Africa. Meeting our safari vehicles and drivers, we set out on our first wildlife drive. Our destination is a remote sector of the Serengeti previously off-limits to visitors for two decades during a period of habitat rehabilitation to increase the cheetah population. Surrounded by open range and kopjes—large granite outcrops that dot the plains—the camp offers fabulous wildlife viewing in diverse habitats, particularly of the abundant feline predators that live and hunt in this area. It also provides exceptional seclusion away from crowds. From luxurious canvas tents shaded by giant acacia trees, survey 360-degree views of wildlife traversing the savanna, with more thrilling encounters in store on game drives.

Days 5–7: Southern Serengeti—Nat Hab's Private Migration Base Camp
Depart this morning for Nat Hab’s private mobile camp in the southern Serengeti, with a game drive en route. Each season, we place our Migration Base Camp in an area the herds are known to frequent. The days of heavy canvas hunting camps set for the likes of Roosevelt and Hemingway were nearly over until photo safaris gained popularity in the 1970s. Our camp is redolent with that vintage atmosphere, with candlelight dinners presented on white linen and nothing between you and the night sounds of the bush but the walls of your tent.

While home to a profusion of wildlife year-round, there is nothing like the Serengeti during the phenomenon of the Great Migration. We spend three days among the sea of mammals, following them in 4x4 vehicles with pop-top roofs that offer superb photography access. During the annual short rains, some 2 million wildebeest trek from Kenya’s Maasai Mara to the southern Serengeti and back again, in search of new grass. They migrate with hundreds of thousands of zebra, whose superior vision serves as an early-warning system for predators. Gazelle and other antelope accompany the huge herds as well.

We are in the region during the time when zebra and wildebeest are giving birth, and the herds may be mostly stationary. The majority of baby wildebeest are born during a single 3-week window, after most zebra young have emerged, and we’ll hope to see infants (though timing on the calf drop is weather-dependent). Predators seek out the most vulnerable members of the herds, and we may witness a lion seize a sick wildebeest or a cheetah overtaking a newborn that has become separated from its mother. Leopard, hyena and jackal also prey on the migrating herds while vultures hang in the air, waiting to feast on carrion. While the spectacle is at times grim, its primal drama is a wonder to behold.

Day 8: Serengeti / Ngorongoro Crater
A scenic drive is in store from the plains to the Ngorongoro Highlands, with an afternoon excursion into the famous crater. One of the Seven Natural Wonders of Africa, Ngorongoro Crater is the largest unbroken caldera on Earth—the center of a massive ancient volcano that scientists believe may have been larger than Mount Kilimanjaro. Twelve miles across and 2,000 feet deep, the crater is home to some 30,000 animals that live year-round inside its walls. Because of the crater's permanent supply of fresh water, it sustains the densest concentration of wildlife in Africa. Common sightings include elephant, buffalo, hippo, giraffe, zebra, blue wildebeest, eland, gazelle and waterbuck, while lion and hyena are abundant predators. A glimpse of the rare black rhinoceros is a special prize. Before dinner this evening, make an optional visit to a nearby Maasai village to meet some of the local residents in an authentic setting. The Maasai are the traditional pastoral herders of East Africa's Great Rift Valley, and we’ll have a chance to learn about their lifestyle and enduring customs.

Day 9: Ngorongoro Crater / Ngorongoro Highlands
At morning's first light, board safari vehicles to descend the steep wall into the 100-square-mile crater floor. Here in this veritable Eden, a host of creatures thrives within an ecosystem of abundant resources. Along with many mammals, flocks of pink flamingos cover the soda lakes, while large land birds like ostrich and kory bustard roam the grassy plain. We spend the bulk of the day viewing wildlife, with a picnic lunch along the way. Late this afternoon, we exit the crater and drive to Plantation Lodge in the Ngorongoro Highlands. This genteel inn is tucked among 25 acres of gardens and tall trees and surrounded by working coffee, flower and vegetable plantations. Time permitting, enjoy a swim in the pool, a massage, or a walk around the lavish grounds.

Day 10: Arusha / Depart
This morning we make the easy drive back to Arusha on a tarmac road, passing farms, villages and lively roadside markets en route. A farewell lunch is served on arrival at our lodge, where day rooms await, offering a chance to relax and refresh before your transfer to Kilimanjaro Airport for international departures this evening.

Interested in extending your trip? Link it up with another adventure!
Repeater Layout : vertical-2up
Extra Day in Arusha

Arusha is the jumping-off point for safaris to Tanzania’s famous national parks—a lively city with a temperate climate at the foot of Mount Meru.
1 Day / From $595
Tarangire National Park

A 5-day safari extension to track endangered mountain gorillas. Hike through the and spend rare moments with a habituated family troop.
5 Days / Year-Round / From $3995 (+permits)