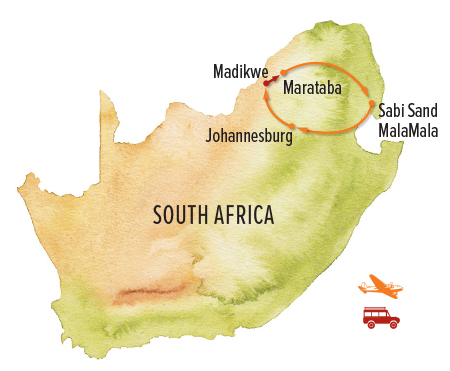 Day 1: Johannesburg, South Africa
Our South Africa tour begins on arrival in Johannesburg. At our welcome dinner this evening, our Expedition Leader shares a preview of the many wildlife adventures that lie ahead on this exclusive safari itinerary.

Days 2 & 3: Madikwe Private Reserve
Transfer this morning to the Johannesburg airport for our flight to Madikwe Safari Lodge on the private Madikwe Reserve, tucked against South Africa’s border with Botswana. Surrounded by grassland, forest and rocky hills, the lodge sits within a transitional zone where the lowveld of Kruger Park and the semi-arid Kalahari thornveld meet. At 185,000 acres, Madikwe is South Africa’s fifth largest private reserve.  Supporting a broad range of wildlife, it is home to the Big Five as well as white rhino, cheetah, unique antelope species and the elusive African wild dog. Madikwe has the second largest elephant population in South Africa, and leopard sightings are typically a highlight, too. We explore Madikwe’s unspoiled wilderness on exciting wildlife drives and guided nature walks, enjoying bush picnics along the way.

After each exhilarating day, return to the comforts of our luxurious lodge, offering warm hospitality in a wild setting. Refresh in your private plunge pool, gather on the main deck to watch wildlife that often ambles by, and enjoy fine dinners by the open fire in the boma. As the cloak of night descends, a spray of stars adds nature’s glitter to the sky.

Days 4-6: Marataba Private Reserve
A three-hour drive takes us to Marataba Private Reserve. Lying within Marakele National Park, this 57,000-acre mosaic of plains, mountains and valleys is home to predators, primates, antelope, small carnivores and more than 400 bird species. Marataba is a less-discovered gem, and while it doesn't have the name cachet of Kruger or Sabi Sand, it delivers one of the most scenic and impressive safari experiences in South Africa.Walking safaris are the focus here, and we seek out black and white rhinos in the company of specialist walking guides. Lion, leopard, elephant and buffalo round out the Big Five, with other abundant species on display, too, including greater kudu, eland, impala, giraffe, zebra, waterbuck, wildebeest, spotted hyena, bat-eared fox, jackal, chacma baboon and vervet monkey. Avian highlights include yellow-billed hornbill, African Scops owl, fiery-necked night jar and lilac-breasted roller. And since we are on a private reserve, we can search for nocturnal species after dusk as we drive off-road to find more elusive animals. The camp's boat is also available for water safaris on the Matlabas River, where elephants snorkel and waterbirds abound.

Each evening, tuck into the comforts of Marataba Safari Lodge, which enjoys an unparalleled setting. Beautifully appointed stone and canvas tented suites are raised on stilts to survey the vast expanse of bushveld beyond. Views over the plains are spectacular, with wide-angle vistas of the Waterberg escarpment merging into acacia savanna. Each luxury tent has a private shaded viewing deck, lending a sense of being one with the wild environment beyond.

Days 7–9: Sabi Sand—MalaMala Private Reserve
Depart this morning on a private chartered flight directly to MalaMala Game Reserve, one of the oldest, largest and most highly regarded private wildlife sanctuaries in South Africa. Covering 33,000 acres and sharing a 12-mile unfenced border with world-renowned Kruger National Park, MalaMala lies in the heart of the legendary Sabi Sand region, the country's premier safari destination. Historic MalaMala was one of the first reserves to transition from hunting to wildlife-viewing safaris. Today it is renowned for some of the best Big Five viewing in Africa. These famous five—lion, leopard, rhinoceros, elephant and Cape buffalo—were once favorite hunting targets, and while many were hunted nearly to extinction, reserves like this one have made inspiring strides in bringing them back. Enjoy the exclusivity of MalaMala Main Camp, situated along the Sand River where wildlife regularly wanders in to drink. MalaMala is famous for its leopard viewing, and evening drives are a highlight here, with an array of nocturnal species on view, including predators on the hunt. As the largest private game reserve in South Africa, safari tourism from MalaMala directly supports many individuals in neighboring communities.

Day 10: MalaMala / Johannesburg / Depart
After breakfast, our safari concludes with a transfer to nearby Skukuza Airport where we board our flight back to Johannesburg to connect with onward flights or extensions.

Interested in extending your trip? Link it up with another adventure!
Repeater Layout : vertical-2up
Namibia Desert Extension
Extension