Kalahari, the Delta & Beyond Photo Itinerary 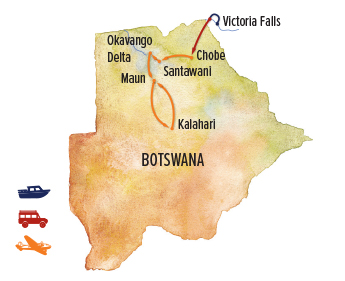 An exclusive highlight of our green season photo itinerary is a doors-off helicopter flight over the Okavango Delta, offering a coveted aerial perspective of wildlife on the move. Travel with an Expedition Leader who is also a photography pro, and make special excursions at sunrise and sunset to capture the best light. With just four guests per vehicle, there's plenty of room to navigate for the perfect shot, plus added baggage allowance on internal flights for extra camera gear.

Day 1: Livingstone, Zambia—Zambezi River
Our Botswana photo tour begins just over the border in Livingstone, Zambia, where our Expedition Leader meets you on arrival at the airport. Transfer to Toka Leya Camp, which enjoys a superb setting on the banks of the mighty Zambezi. Individual chalets face west over the river for expansive sunset views. Keep your camera ready, as we frequently see elephants and hippos on shore. A sunset cruise offers a chance to photograph the river scenery before returning to camp for a welcome dinner.

Day 2: Mosi-oa-Tunya National Park—Rhino Walk / Village Visit / Victoria Falls
Our day begins with a visit to Mosi-oa-Tunya National Park, where a game drive offers our first sampler of the species diversity we hope to capture photos of during our safari, plus our best chance to see and photograph a white rhinoceros. Accompanied by a local guide and park rangers tasked with guarding the park's rhinos around the clock, we'll get out of the vehicle for more intimate encounters and closer photo ops, learning how to read signs of the rhinos' presence and follow their movements. With no predators in the park, we can also walk safely in search of zebra, giraffe, warthog, various antelope species, and other smaller mammals and birds. Elephants regularly cross the river, and we often see them wandering throughout the park. Later this morning, visit a nearby village to learn about the daily life and traditions of the local people. Then it’s off to Victoria Falls, the world’s most astounding cataract, for a guided walking tour. The profuse spray has created a rain forest on the rim, and a network of walkways offers varying photo viewpoints over falls, which span more than a mile and plummet 350 feet into the Zambezi Gorge.

Day 3: Chobe National Park, Botswana / Okavango Delta—Santawani Private Concession
Leaving Zambia by road, we reach the Kazungula border on the Chobe River, where Botswana, Zambia, Zimbabwe and Namibia meet. Entering Botswana, our destination is Chobe National Park, known for its enormous elephant herds and stable population of general wildlife species throughout the year. On a private boat cruise on the Chobe River, expect to photograph plenty of elephant, hippo, crocodile, and possibly the more elusive puku and Chobe bushbuck. Up to 400 bird species reside in the park at this time of year, and waterbirds abound, especially herons, storks and egrets. Later this afternoon, fly by light aircraft to Gomoti Tented Camp in the community-owned Santawani Concession in the Okavango Delta. This intimate camp, reserved exclusively for our group, offers the utmost in a private, secluded experience of the delta—an optimal base for wildlife photography.

Days 4 & 5: Okavango Delta—Visit with Predator Researcher
Earth’s largest inland water system, the Okavango Delta, became UNESCO's 1,000th World Heritage Site in 2014. The Okavango River’s headwaters lie in the western highlands of Angola, joining with other rivers in Namibia and Botswana to meet the Kalahari Desert, where a green oasis sprawls amid the sands and dry savanna. With its vast network of channels and wetlands, the delta is home to a profuse collection of wildlife and vegetation. Though some of the region is permanently flooded (or typically has been), the water recedes during the southern summer months, and normally wetter areas of the delta open up for game drives and expansive wildlife photo opportunities. Specific wildlife sightings, while always abundant, will depend on seasonal water levels. Among the many species we may have a chance to photograph are leopard, lion, wild dog, hyena, cheetah, giraffe, elephant, impala, kudu, zebra, wildebeest and buffalo. Wildlife is abundant around camp, and we often see animals wandering through. Birdlife is also outstanding, and we may see ground hornbill, crimson-breasted shrike and yellow morph, among dozens of others.

The diverse range of habitats, plus the year-round lifeline of the Gomoti River, make this region ideal for all-day photography excursions including traditional 4x4 game drives, guided walks (safety permitting) and night drives. A mix of riverine woodlands, acacia scrub and open floodplains provides ample food for a large array of browsers and grazers, as well as predators. During a private visit with an on-site predator researcher, learn about local studies on wild dog, cheetah and leopard. After each day's adventures, retreat to the comfort of our camp, where paraffin hurricane lanterns and the glow of a campfire lend romantic ambience.

Days 6–8: Central Okavango—Private Jao Concession / Helicopter Flightseeing
Fly this afternoon to the center of the Okavango Delta for a three-night stay on the private Jao Concession, marked by palm-studded islands, riverine forest and sprawling floodplains. Our secluded camp is set within a productive wetland that nurtures prolific wildlife, which we'll photograph in thrilling proximity on 4x4 drives, guided walks (safety permitting), boat rides and poled mokoro excursions if water levels permit. The mokoro is the traditional dugout canoe of the delta, and Okavango-born polers reveal intimate secrets of delta life as we spot tiny frogs and colorful waterbirds. (Please note that water levels and activities may vary based on actual amounts of anticipated annual rainfall).

The Okavango is dramatic big-game country, home to plentiful buffalo, blue wildebeest, giraffe, zebra, bushbuck, tsessebe, water-adapted antelope like red lechwe and the rare sitatunga, and, of course, elephants. And where game thrives, so do predators—keep cameras poised for shots of lion, leopard and hyena on the prowl. In the channels, capture photos of hippos and crocodiles, plus scores of birds in the marshes. Pel’s fishing owl is a prize sighting, and we may also spot African and lesser jacanas, slaty egret, African skimmer, wattled crane and malachite kingfisher, to name just a few. A highlight of our time in this region is a 30-minute helicopter flight over the greater Okavango Delta...with doors off for the most spectacular photography opportunities! Back in camp, there's time to review and edit photos from the day's exploits. Later, sleep comes easily under canvas as we're lulled by the soothing sounds of the African night.

Days 9–11: Eastern Kalahari—Makgadikgadi Pans
Thrilling photography prospects are in store as we transfer by light aircraft to the eastern side of the 360,000-square-mile Kalahari Desert, enjoying an aerial view on the stark landscape and roaming wildlife below. Our tented camp rests on the edge of the world’s largest salt pan, an oasis of comfort shaded by acacia and palm trees. The Makgadikgadi Pans formed when an ancient lake evaporated thousands of years ago, and these shallow depressions are all that remain of once-enormous Lake Makgadikgadi. Today, this vast expanse of salt glitters in the intense sun, evoking a moonscape. The only visible plant life is a thin layer of blue-green algae, but seasonal rains turn the pans into an important habitat for migrating animals, including wildebeest and one of Africa’s largest zebra populations, along with the predators that pursue them, including the famous Kalahari black-maned lions.

Have your camera ready as we look for unusual desert-adapted creatures on private game drives,  heading out in search of gemsbok, springbok, red hartebeest, steenbok, plus many small mammals such as honey badger and mongoose, and plentiful birds and reptiles. We'll also interact with a friendly habituated colony of meerkats. Quad bikes offer an exciting way to explore the lunar-like surface of the pans. The Kalahari is also the ancient home of the San people, who have subsisted in these austere environs for more than 30,000 years. Our time includes cultural engagements offering insight into the history and traditions of the clans in the area. Back at camp each night, enjoy some of the best stargazing on the planet.

Day 12: Maun / Depart
Our Botswana photo safari comes to a close today when we depart by air for Maun to connect with onward flights.

Click here to view the seasonal variations of weather and wildlife viewing in Botswana.
Interested in extending your trip? Link it up with another adventure!
Repeater Layout : vertical-2up
Wild Cape Coast Extension
Extension