Exploring the Sea of Cortez: A Living Sea & Desert Isles 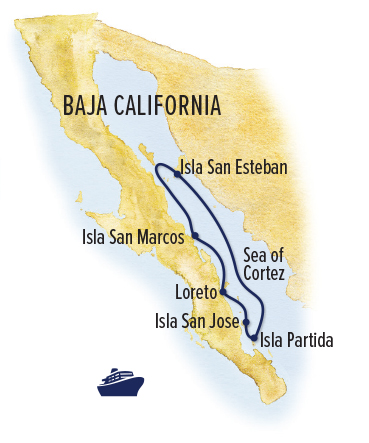 Day 1: Loreto, Baja California, Mexico—Embark Ship
Fly into Loreto, midway down the Baja Peninsula, and embark ship. Set sail this evening on the Sea of Cortez, also called the Gulf of California, which separates the Baja Peninsula from mainland Mexico. The sea bears the name of Spanish conquistador Hernan Cortez, who was the first European to send expeditions to the gulf. When he landed on the Baja Peninsula in 1535, he believed he had found the mythical island of "California," a legendary quest among earlier Spanish explorers.

This long, narrow body of water came into being some 5 million years ago when tectonic forces wrenched the Baja Peninsula away from the North American plate. The Pacific Ocean filled the gap, creating one of the world's youngest and most biodiverse seas, a veritable "fish trap" due to its geographic confines. Volcanic islands rise from the blue-green waters, further evidence of the powerful geologic forces shaping this wild habitat. Within the still-evolving Sea of Cortez, we find coral reefs, estuaries, seagrass beds and rocky providing habitat for a vibrant array of marine life.

Days 2–7: Exploring the Sea of Cortez
Biologically speaking, the Sea of Cortez is the richest body of water on the planet, and we have a full week to delve into its marine wonders. Jacques Cousteau called it "the world's aquarium," and it's easy to see why. More than 900 species of fish live here, with 10 percent of them found nowhere else. From schools of silvery snapper and skipjack to neon-colored angelfish, blue tangs and Cortez damselfish, snorkeling here offers a chance to swim among a kaleidoscope of dazzling sea life.

The Sea of Cortez is also home to five of the world's eight species of endangered sea turtles; 170 shark species, with hammerhead, and sand sharks spotted most frequently; numerous rays including mantas and flying that leap vertically out of the water; huge regattas of bottlenose dolphins; great colonies of seabirds that nest on island cliffs, including blue-footed and brown boobies and black storm petrels; and, of course, whales. While most of the gray and humpback whales will be migrating north to by the time we arrive, we anticipate seeing plenty of others such as resident sperm and fin whales, minke, Bryde's and maybe even the gigantic blue whale—the world's largest animal.

Our route is designed with flexibility in mind to maximize opportunities for wildlife sightings. If, for example, we see Bryde’s whales in the morning, our scheduled hike will be postponed so we can linger among them, shooting photos from the bow of the ship or from our expedition landing craft.

While our itinerary is not fixed, it will most likely include these islands and activities, though the order may vary:

Isla San Esteban
Walk up a dry wash to search for desert songbirds such as the handsome black-throated sparrow, listen for the cascading song of the canyon wren, and look for and the endemic pinto chuckwalla—a gentle member of the iguana family found only on this island.

Isla San Marcos
One of the few inhabited islands we visit, rugged San Marcos is home to about 500 people and offers plentiful opportunities to explore via kayak,  and hikes ashore though partially forested environs. A beautiful shoreline also invites swimming. When we sail from here, we are in rich cetacean waters near the mouth of Bahia Concepcion, where excellent possibilities exist to sight several whale species, plus pods of common and bottlenose dolphins—with luck, the latter may join us as we cruise, riding our bow wave and sometimes leaping from the water to delight everyone on deck.

Isla San Jose
One of the larger islands in the Sea of Cortez, San Jose offers several landing possibilities depending on conditions and the whim of the moment. Photograph the ochre cliffs on the island's eastern shore, hike a cactus-filled arroyo, visit the abandoned salt works on the island's west side, and snorkel with sea lions.

Bahia Loreto Marine Park
Within this rich marine sanctuary, the waters south of Isla Carmen offer good odds for finding blue whales and fin whales, and researchers have recently concluded that the latter may be part of a resident population. We also frequently encounter bottlenose and common dolphins. We'll visit one of the islands inside the marine park, with ample time for kayaking, snorkeling, stand-up paddleboarding and possibly hiking. In the evening, enjoy a beach barbecue under the desert sky.

Los Islotes and Isla San Francisco
This collection of rocky uninhabited islands lies in the southern Sea of Cortez, and Los Islotes is the southernmost rookery of the California sea lion, where we find a colony of several hundred in residence. Curious youngsters often want to check us out as we swim and snorkel in the clear turquoise waters. Numerous seabirds nest in the vertical cliffs above the colony—watch out for dive-bombing pelicans! On Isla San Francisco, keep an eye out for 10 different species of reptiles, including the endemic Isla San Francisco whiptail, as we explore the island's rocky beaches and salt flats. Birds abound here, too: look for yellow-footed gulls, brown pelicans and blue-footed boobies.

Day 8: Loreto—Disembark / Depart
Return to Loreto to disembark ship. A transfer to the airport is included to meet homeward flights.

Exploring the Sea of Cortez: A Living Sea & Desert Isles