Pearls of the Pacific: Exploring the Society & Tuamotu Islands 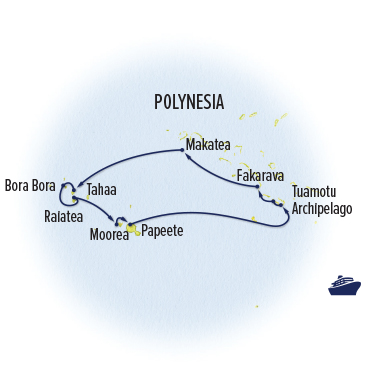 Days 1 & 2: Papeete, Tahiti, French Polynesia—Embark Ship
Depart from North America on an overnight flight to the island of Tahiti. Arrive in Papeete, capital of French Polynesia, the morning of Day 2 and proceed directly to the National Geographic Orion for embarkation. Once you're settled in to your cabin, unwind on board or explore downtown Papeete on foot, including the central market where vendors sell fresh fruit, pareos, local arts and crafts, and coveted black pearls. Lunch is served aboard, and shortly after, we set sail for the Tuamotu Archipelago. This afternoon, meet the staff and your traveling companions as you relax into island time.

Days 3 & 4: Cruising the Tuamotu Archipelago / Anaa
Spend two days on an unscripted exploration of the Tuamotus, a group of nearly 80 islands and atolls that extends across an area roughly the size of Western Europe. Tuamotus means "distant islands," a name bestowed by Polynesian settlers from Tahiti who archaeologists believe brought their language and culture to this far-flung island chain in the 8th century. Rich in marine life, the crystalline lagoons of these low-lying coral isles are fringed by white sand beaches and lush coconut groves, evoking dreamy images of a tropical paradise. The world under the sea is equally beguiling, awaiting discovery on a dive or snorkel excursion. Among the coral gardens, look for large schools of pelagic fish, manta rays, dolphins, hammerhead sharks and endangered sea turtles. The calm waters protected in the atoll lagoons are an ideal place to try standup paddleboarding, for a view on the transparent waters from above. On the sparsely inhabited island of Anaa, meet the local residents and learn about their longstanding customs and traditions.

Days 5 & 6: Fakarava
Today Orion calls at Fakarava, one of the largest atolls in French Polynesia with the second-largest lagoon in the Tuamotus. The center of a UNESCO Biosphere Reserve comprising seven low-lying coral islands and atolls, Fakarava is home to many rare and endemic species of birds, plants and crustaceans. Don't miss the opportunity to snorkel over its protected reefs and ride the current into the lagoon on a world-famous drift dive. In one of the passes that feed into the lagoon, a narrow underwater valley known as Shark's Hole is heavily populated with harmless lemon, whitecap and hammerhead sharks. Once you've had your fill of exploring beneath the sea, spend time discovering Rotoava, the main village on Fakarava. Take a leisurely bike ride, visit a pearl shop, or stroll the waterfront along the turquoise ocean sipping nectar from a fresh coconut.

Day 7: Makatea
An uplifted coral atoll in the Tuamotus, the island of Makatea is one of the most unique landforms in the Pacific. Tilted due to plate tectonics, it has dramatic vertical cliffs that ring its coastline, rising 260 feet from the ocean's surface—in stark contrast to other islands in the region. Its distinctive features have resulted in the name makatea being applied as a generic term for all other raised coral atolls worldwide. Spend the day exploring the island’s limestone caves and grottos with your expedition team and local guides, or search for endemic fruit doves and myriad seabirds.

Day 8: Tahaa / Bora Bora
Arrive in picture-postcard Tahaa and spend the morning snorkeling in the crystalline lagoon alongside black-tipped reef sharks. Or opt to go ashore and visit a family-run vanilla farm. Return to the ship for lunch as we sail for Bora Bora. Lying northwest of Tahiti and covering just 12 square miles, Bora Bora epitomizes the romance of the South Pacific. Be sure you're on deck to watch the iconic green crags of Mount Otemanu come into view, the remains of an extinct volcano rising out of Bora Bora's aquamarine lagoon.

While Bora Bora is most famous for its natural beauty, its cultural history is also of interest: The island was inhabited by Polynesian settlers who crossed the ocean from Tonga and Samoa around the 4th century. Perhaps the greatest navigators of all time, it is astonishing to consider that Polynesians could confidently navigate the vast Pacific using the stars, wind and patterns of bird flight more than a thousand years before the first Europeans mastered sailing in their own waters. The first European sighting of Bora Bora was in 1722 by Dutch seafarer Jakob Roggeveen. Captain James Cook set foot on the island in 1777 after locating it earlier with the help of a Tahitian navigator, Tupaia. Bora Bora was an independent kingdom until 1888, when the French annexed the island as a colony and forced its last queen, Teriimaevarua III, to abdicate. During World War II, the United States chose Bora Bora as a South Pacific military supply base, although the island never saw combat. Spend the afternoon getting acquainted with this beguiling island, exploring either on land or water.  Then join us for a barbecue dinner and music on a private motu this evening.

Take in the sunrise on deck as we sail to Raiatea in the early morning light. One of the most important cultural sites in the Polynesian world, the Taputapuatea marae complex on Raiatea was designated a UNESCO World Heritage Site in 2017. A political, ceremonial and funerary center for Polynesian seafaring culture for a thousand years, it is the location from which maritime explorers set out for Rapa Nui (Easter Island), Hawaii and New Zealand. Scattered throughout Polynesia, marae are known as holy sites where the world of the living and the world of the ancestors and gods converge. On a scenic lagoon cruise around the island, we sail for the village of Uturoa. Taste local Polynesian specialties during lunch at a beachside restaurant, then spend the afternoon swimming, snorkeling or paddleboarding from the beach in the calm transparent waters of Raiatea's turquoise lagoon.

Day 10: Moorea
Wake up to views of Moorea's vertical green peaks as we anchor in stunning Opunohu Bay. Rising out of the ocean like an emerald cathedral, Moorea's jagged spires are draped in tropical vegetation and crowned by clouds, with waterfalls pouring down their steep sides. Spend the morning discovering the island's many charms: hike through a pineapple plantation, explore the lush interior on horseback, or snorkel in the crystal-blue lagoon. Relax on board over lunch on deck and admire views of the island as we cruise toward Cook’s Bay, where we spend the rest of the day. Also called Paopao Bay, Cook's Bay is named for Captain James Cook, who visited Moorea for the first time on his third voyage to the Society Islands, when he landed in Opunohu Bay on September 30, 1777. Join an afternoon excursion to Moorea’s newest museum, and enjoy the golden light of late afternoon from shore.

Days 11 & 12: Moorea / Papeete—Disembark / Depart
This morning, stretch your legs with an early walk into the caldera interior of Moorea, revealing the island's status as an ancient volcano, or look for abundant marine life in the lagoon on a leisurely snorkel excursion. Known for its colorful fish, the clear waters of the lagoon may reveal butterflyfish, angelfish and triggerfish among the corals, as well as pink whiprays, spotted eagle rays and black-tipped reef sharks. Return to the ship for lunch as we cast off for Tahiti, just 11 miles away. On arrival in Papeete, disembark the ship and check into a hotel room for the afternoon, a base to relax and refresh before late-evening transfers to the airport for homeward flights.

Pearls of the Pacific: Exploring the Society & Tuamotu Islands