Fill out the form below to receive additional information about our Norwegian Fjords & Scottish Isles or give us a call at 800-543-8917. 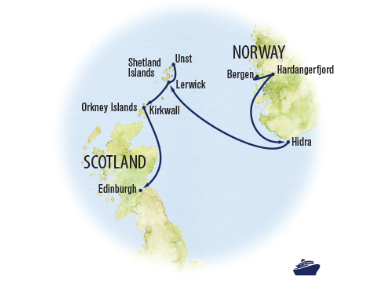 Days 1 & 2: Depart / Bergen, Norway
Board an overnight flight to the coastal city of Bergen, the gateway to Norway’s fjord country. Discover the city’s maritime history on a tour of Bryggen, the colorful old wharf district now designated a UNESCO World Heritage Site. Heading to the pier,

Day 3: Hardangerfjord
Norway’s glacier-carved west coast is famed for some of the most beautiful scenery on Earth. Sheer peaks flank jade-green fjords. Lush meadows fill the basins between the mountains, and waterfalls pour from ledges hundreds of feet overhead. Our focus today is Hardangerfjord, the second-longest fjord in Norway, jutting 111 miles into the interior from the Atlantic coast. During the 13th century, apple-growing was introduced in Hardanger by monks from England. Today, 40 percent of all Norwegian fruit is grown in the Hardangerfjord region including apples, sweet cherries, pears and plums. The Hardanger fiddle, Hardanger embroidery and the traditional Hardanger folk costume are all renowned in Norway and regarded as national symbols. Explore the fjord from kayaks and Zodiacs, cruising along rockbound shorelines beneath staggering cliffs. Ashore, hike or bike in verdant valleys among fruit orchards and wildflowers watered by snowfields on high.

Day 4: Hidra / At Sea
Endurance drops anchor off the little-visited island of Hidra this morning, located inside Flekkefjord near the very bottom of Norway. The 8-square-mile island is currently home to 600 year-round residents. Its richly layered history dates from the Viking age through World War II, when the Germans controlled the island as a strategic site along occupied Norway's coast. Glide past the picturesque village of Kirkehamn by Zodiac or kayak, admiring the historic white-steepled church that dominates the small skyline. Alternately, visit the town of Flekkefjord, located at the head of the fjord. Stroll among the white wooden houses of the Dutch Quarter, a trading hub during the 16th and 17th centuries, then visit the local museum, which dates from about 1720 and houses a variety of exhibits featuring traditional Norwegian interiors and textiles.

Day 5: Shetland Islands, Scotland—Isle Of Noss / Lerwick
Leaving Norway’s crennelated coast in our wake, Endurance crosses the North Sea to the Shetland Islands, where Norse and Gaelic culture intermingle in fascinating ways, reflecting centuries of competing influence from Scandinavia and Scotland. Cruise below the towering cliffs of Noss, a nature reserve home to thousands of seabirds including large colonies of puffins, guillemots, and kittiwakes. In the busy port city of Lerwick, capital of the Shetlands, select from several options: Explore the town, with its 18th-century sandstone warehouses; delve into local history and culture at the Shetland Museum and Archives; choose a birdwatching or geology-focused excursion; or discover the prehistoric settlement of Jarlshof, revealing 4,000 years of near-continuous settlement as we examine Bronze Age ruins and Viking longhouses.

Day 6: Isle of Unst
Arrive at Unst, the northernmost of the Shetlands and the farthest-north inhabited island in Britain. Packed into an area just 12 miles long by five miles wide are towering cliffs, jagged sea stacks, sheltered inlets, golden beaches, hills blanketed in heather, freshwater lochs, peat bogs, fertile farmland, and even a subarctic stony desert that blossoms with unique flowers. This compact mosaic of habitats supports a rich variety of wildlife, as well as purebred Shetland sheep and ponies that roam the common grazing land. Visitors often meet Unst's world-famous Shetland ponies by the roadside. Enjoy outstanding birdwatching in Hermaness National Nature Reserve, and follow trails into the interior that skirt imposing cliffs. Weather permitting, paddle the scenic coastline by kayak or cruise by Zodiac to the farthest-north lighthouse in the United Kingdom. At the Unst Heritage Center, observe artifacts of local life, including handspun wool and fine lacework, fishing tools and wooden boats.

Days 7 & 8: Orkney Islands
The Orkney Islands are a sandstone archipelago defined by gently rolling landscapes of heather moorland, lochs and flower-strewn meadows, and rocky coastlines that draw hundreds of thousands of nesting seabirds to the vertical cliffs in early summer. Inland, look for oystercatchers, short-eared owls and raptors overhead. Grey and common seals bask on rocks and bob in the surf just offshore, casting an inquisitive eye as we wander down the beach. Whales, dolphins and porpoises cruise coastal waters warmed by the Gulf Stream, their clear turquoise color belying the northern latitude. Though they lie just off the northern tip of Scotland, the Orkneys reflect a heritage more Norse than Gaelic. The Vikings held a strategic foothold here for centuries, and their presence is evident throughout the islands. In the main Orkney town of Kirkwall, we visit medieval St. Magnus Cathedral, founded in 1137 by the Viking Earl Rognvald. The Orkneys also boast a great number of prehistoric archaeological sites with World Heritage status, including standing stones and Pictish ruins. We'll explore the 5,000-year-old Stone Age village of Scara Brae and the Ring of Brodgar, the finest late-Neolithic stone circle in Britain.

Day 9: Edinburgh–Disembark / Depart
Endurance docks in historic Edinburgh this morning where our voyage ends. Take a guided tour of this quintessentially Scottish city on arrival. Later today, transfer to the airport for homeward flights.


Click here to see your trip details PDF. You should also receive it by email momentarily.
Ask a Question
Fill out the form below to receive additional information about our Norwegian Fjords & Scottish Isles or give us a call at 800-543-8917.
Download Trip Details
Receive our handy trip PDF by email and have everything you need at your fingertips, including highlights of the trip, itinerary, accommodations, and full details on dates, prices and logistics.


Click here to see your trip details PDF. You should also receive it by email momentarily.
/adventure-cruises/norway-fjords-scotland-isles-tour/itinerary/
Physical Requirements