A Circumnavigation of Iceland 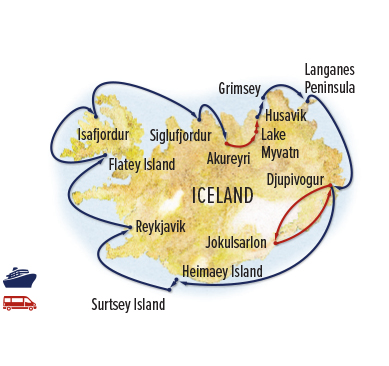 Day 2: Arrive Reykjavik / Embark Ship
Arrive in Reykjavik, the world’s northernmost capital, which lies less than two degrees below the Arctic Circle. Its northerly location provides 22 hours of sunlight high summer, with perpetual light creating a lively, energetic atmosphere on summer evenings. Following the 45-minute transfer from Keflavik airport into the city, our Iceland adventure begins with a guided tour of Reykjavik's historic old town. Highlights include Hallgrimskirkja Cathedral, whose modernist facade and 210-foot tower designed in 1937 and completed during the mid-20th century, and the National Museum of Iceland, where you'll get an overview of Nordic history and culture, admiring Viking artifacts and unusual whalebone carvings on display. Embark your expedition ship this afternoon, with dinner served aboard.

Day 3: Sea Bird Cliffs / Flatey Island
As our captain navigates Iceland’s wild west coast, we sail past immense sea cliffs where near-vertical rock walls are home to millions of nesting seabirds. Species we're likely to see include puffins, razorbills, gannets, guillemots, murres, kittiwakes, fulmars, white-tailed eagles, red-throated loons, arctic terns, redshanks, snipes, auks, snow buntings and ringed plovers. Some of the cliffs in the region were once famous for egg collecting; men were tied to ropes and lowered like spiders down onto the ledges to reach the nests. At Flatey Island, a centuries-old trading post, we'll go ashore to walk around the charming hamlet that remains here, with its photogenic colorful houses, and take a Zodiac cruise along the coastline.

Day 4: Exploring Northwest Iceland
Lying just south of the Arctic Circle, the far-flung Westfjords embrace Iceland's most northwesterly point. Exceptionally remote and peaceful, much of this corner of Iceland can only be accessed on foot or by sea. Erik the Red, father of Leif Eriksson, was among the first in a thousand-year line of settlers who survived on a peninsula here, living on herring and seabird eggs. Once we enter the Isafjaroardjup, a fjord system that extends far inland and progresses to steeper and taller mountain shores with each of its eight fjords, you can opt to hike to a remote waterfall or take a scenic Zodiac ride along the rugged coast. Eventually, a stop at Vigur Island lands us at a birder’s paradise that is home thousands of species, including puffins, black guillemot, Arctic terns and eider ducks. The walkable island is the second largest in the bay, but it has only five inhabitants—a farmer and his family. For years, the farmers have collected the down from resident nesting ducks’ nests and sold it for cushions and duvets. More than 200 years ago, a farmer built a small stone wall with cubby holes that made a perfect refuge for nesting mother ducks. This “Eider Duck Hotel” still operates today, and we’ll stop by the Eider Farm to see the down cleaning process.

Day 5: Isafjordur, Westfjords
"Capital" of the Westfjords on Iceland's northwest flank, the town of Isafjordur is surrounded by water on three sides, its harbor sculpted by glaciers. Originally settled by Vikings in the 9th century, Isafjordur became a trading post for foreign merchants in the 16th century and today is the main town in the Westfjords. The sheer isolation of this region has kept it well off the traditional tourist circuit, and Isafjordur offers a picture postcard of traditional Icelandic life. The area is renowned for its traditional eider down production, and we keep an eye out for local eider ducks as we explore on foot and via Zodiac.

Day 6: Siglufjordur / Akureyri
Siglufjordur, a small town on Iceland's north coast, was the center of the country's once-thriving herring industry in the mid-20th century. We make a stop at the Herring Museum, which focuses on the wealth once provided by these small silver fish and how they were processed. Though the museum receives relatively few visitors in this remote location, it is the largest marine and industrial museum in Europe and has received the European Museum of the Year award. Though the herring are gone today, the town's economy is still fishing-based, which we experience more closely through a re-enactment and tasting. We sail on to Akureyri, backed by mountains at the head of Iceland's longest fjord, Eyjafjordur. Akureyri is Iceland's largest town outside Reykjavik, and though its population is just 18,000, it has a decidedly lively vibe. There's time to explore the Old Town, with its beautifully maintained period houses dating as far back as the late 18th century, or visit the Arctic Botanical Garden.

Day 7: Lake Myvatn / Husavik Whale Watching / Grimsey
Drive inland this morning to Myvatn, the most geologically active area in Iceland. Lake Myvatn fills the remnant of a crater formed during a massive eruption 2,300 years ago, and the area around it is an introduction to world-class field geology. The lake is also one of the premier birdwatching areas in the world, with marshes providing habitat for huge numbers of migratory birds during the summer, with more than 115 species on view. At Hverarond, witness boiling mud pools so hot they actually bubble, and see the Viti explosion crater in the Krafla Volcano geothermal area. The wonders continue at Godafoss, the "waterfall of the gods," which is one of the most dramatic in Iceland. The falls plunge 40 feet over an ancient lava cliff shaped like a horseshoe, stretching 100 feet across.

Continue to Husavik where we rejoin our ship. This is one of the best places in the world to see whales, and Husavik is widely known as the whale-watching capital of Europe, so you'll want to be out on deck to look for them as we cruise. Icelandic waters are home to 24 different whale species, and in this area, we may see humpback, fin, minke, sei, blue, sperm, northern bottlenose and long-finned pilot whales, as well as orca, harbor and white-beaked dolphin. Our naturalist guides are by your side to help you spot and identify the abundant marine life. Sailing north to the land of the midnight sun, our destination is the tiny island of Grimsey, located about 30 miles off Iceland's north coast. Known as the land of a hundred people and a million seabirds, Grimsey lies exactly on the Arctic Circle. We go ashore by Zodiac to celebrate being officially in the Arctic, in the company of nesting arctic terns, fulmars and puffins in burrows, all busily bathing, courting and fishing.

Day 8: At Sea / Skalanes Nature Reserve
Making our way around to the second half of our Icelandic circuit, and with plenty of rarely visited shoreline to examine, we spend the morning at sea as we round the northeast rugged northeast corner of Iceland. This afternoon, visit Skalanes Nature Reserve outside Seydisfjordur, encompassing more than 3,000 acres of habitats and ecosystems representative of Iceland's East Fjords region. In addition to observing abundant wildflowers and lively activity on the peninsula’s 2,000-foot-high bird cliffs, we also see and learn about fascinating ongoing archaeological excavations, including farms and turf structures that date to Iceland's settlement.

Day 9: Djupivogur—Vatnajokull Ice Cap / Jokulsarlon Glacier Lagoon
Djupivogur is our port of call, with a choice of three excursions: explore the Vatnajokull Ice Cap and Jokulsarlon Glacier Lagoon, travel by 4x4 vehicle into some of the secluded valleys and remote waterfalls in the countryside around Djupivogur, or visit a local farm to meet families living in rural Iceland and learn about their traditions and way of life.

Vatnajokull is Europe's largest ice mass, covering over 3,000 square miles and averaging more than 1,400 feet thick. In 2008, Vatnajokull Glacier and its magnificent surroundings were declared Iceland's largest national park, covering 13% of the country's terrain. Few places in the world exhibit the effects of such a wide range of natural phenomena, where ice and fire compete to shape a landscape honed by the combined forces of rivers, glaciers, volcanoes and geothermal activity. Guests who choose this excursion will examine the snow-covered surface of the ice cap up close before continuing to the large ice lagoon of Jokulsarlon for a boat ride among the flotilla of glittering blue icebergs that drift across the lake's surface. Fed by Vatnajokull Glacier, the lagoon began to form in the 1950s and has grown every year, as the pace of glacial melting accelerates and the ice tongue recedes to reveal ever more water. In this regard, the glacial lagoon offers a living laboratory for observing the effects of global warming. As the chunks of ice calve into the lagoon, they slowly melt and float out to sea, where the ocean waves may drive them back onto the black volcanic sand that forms the beaches of Iceland's south coast.

Day 10: Westman Islands—Surtsey & Heimaey
Overnight, our ship has rounded the southern side of Iceland to reach the Westman Islands. Formed by undersea volcanoes between 5,000 and 10,000 years ago, the islands comprise one of the planet's youngest archipelagos. We cruise past the newest island, Surtsey, which was formed by volcanic action from 1963 to 1967. The world witnessed its creation on film, and Surtsey a UNESCO World Heritage Site from its birth, providing the world with a pristine natural laboratory in which to observe how plant and animal life colonize new land. We call at Heimaey, the largest and only populated island in the Westmans. Half the town on the island was destroyed by lava flows from Eldfell Volcano in 1973, which nearly closed off its harbor. An emergency operation to cool the advancing lava with sea water held it at bay. We visit the volcano crater, where the earth is still hot, and survey impressive views of the broad area once engulfed by lava.

Day 11: Reykjavik—Disembark / Depart
Our circumnavigation of Iceland is complete today as we return to Reykjavik and disembark. Choose between two tours this morning: the first option is an excursion to one of Iceland’s signature hot springs, an Icelandic horse farm home to this hardy breed with stout legs and a long mane, and a geothermal power plant. Or, visit Reykjanes GeoPark to view the Mid-Atlantic Ridge above sea level, which separates the North American Plate from the Eurasian and African plates, plus a nearby hot springs area. After lunch, transfer to the airport for flights home.

A Circumnavigation of Iceland