Fill out the form below to receive additional information about our Exploring Greenland & the Canadian High Arctic or give us a call at 800-543-8917. 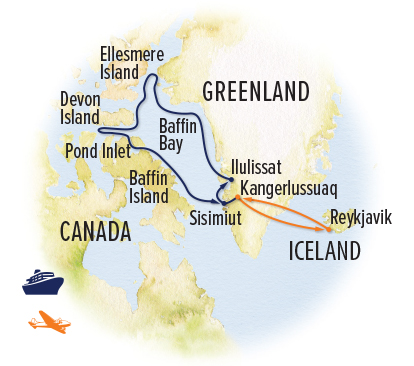 Days 1 & 2: Fly to Keflavik, Iceland / Reykjavik
Depart on an overnight flight to Keflavik, Iceland, where the international airport lies about 45 minutes Reykjavik. Arriving on Day 2, transfer to our hotel in Iceland's compact capital, then take a guided tour of the historic Old Town at the heart of this lively seaside city, which includes a visit to Hallgrimskirkja Cathedral with its imposing Art Deco spire.

Day 3: Reykjavik / Kangerlussuaq, Greenland—Embark
Depart this morning from Reykjavik’s domestic airport near the city center for our chartered flight to Greenland. From the air, the world's second-largest ice cap stretches as far as the eye can see, covering 660,000 square miles—about 80 percent of Greenland's land mass. We land in Kangerlussuaq, the gateway to western Greenland. This small town sits on an alluvial plain at the head of a 118-mile fjord near the edge of the Greenland ice sheet. On arrival, we board our expedition ship, the National Geographic Explorer. Sailing the length of Kangerlussuaq Fjord, the Explorer enters Bay and turns north to follow Greenland's coast.

Day 4: Greenland’s West Coast—Sisimiut
Dozens of deep fjords cut into Greenland’s west coast, many fed by glaciers winding down from the enormous ice cap that crowns the world's largest island. As we trace this coastline, search for humpback, minke and fin whales that flourish in these frigid waters. Our first port of call is Sisimiut, a former whaling port on the Davis Strait that is now Greenland's second-largest town. The site has been inhabited for 4,500 years, and most of the current population is descended from the Thule people, the most recent iteration of Inuit culture. Danes arrived in the area in the 1720s, and contemporary Greenlanders in Sisimiut are typically a mix of Inuit and Danish heritage. Like many settlements in Greenland, Sisimiut's wooden houses in bright primary colors tumble down the hillside overlooking the harbor. We pass under a large arch made of bowhead whale bones to visit the historic district and museum housed in 18th-century colonial buildings. The collection showcases Sisimiut's trade and shipping history and its many layers of cultural tradition.

Day 5: At Sea in Baffin Bay
A relaxing day at sea crossing Baffin Bay allows time for leisurely activities aboard. Take in talks from our expedition staff about the riveting history of polar exploration, as well as the natural history of our High Arctic environs. Head up to the bridge to chat with the ship's officers and watch for whales off the bow. Tuck in to the library, where a collection of titles on the Arctic environment, wildlife and polar exploration invites settling into a comfortable chair. Enjoy the sauna or opt for a rigorous workout in in the fitness center, with its “million-dollar views.” Or simply relax in the observation lounge and watch the passing tableau.

Days 6–13: Exploring Canada's High Arctic
Our immersion in Canada's High Arctic begins with a visit to the small Inuit community of Pond Inlet on Lancaster Sound, a picturesque setting ringed by mountain ranges. Carved by Ice Age glaciers, Lancaster Sound is the eastern gateway to the Canadian Arctic Archipelago. This group of more than 36,000 islands lies off the northeast edge of North America, sprawling over 550,000 square miles and including Nunavut and part of the Northwest Territories. English claims on the islands were based on the explorations in the 1570s by Martin Frobisher, English navigator and explorer William Baffin ventured here in the early 17th century to search for the legendary Northwest Passage, lending his name to the bay and island that dominate this Arctic landscape.

Lancaster Sound has been a favored hunting and fishing grounds for the Inuit and their ancestors for millennia, relying on its abundant natural resources for food, clothing, shelter and cultural sustenance. Our days in the area are spent looking for ringed seals, Arctic fox, walrus and polar bear, as well as beluga and bowhead whales. We may even spy the elusive narwhal, known for the long, spiraling tooth that projects up to 10 feet from its upper jaw. On a visit to Devon Island, walk with our ship's archaeologist to learn about the Thule people who once inhabited this region—the ancestors of all modern-day Inuit. Go ashore at Dundas Harbor to hike on the tundra and search for intriguing flora and fauna, including extensive moss beds interspersed with flowering vascular plants. We may also spy gyrfalcons, nesting above the ancient sod and stone dwellings once inhabited by the Thule.

Drawing upon Lindblad's decades of experience in polar waters, we make the most of our opportunity to explore the wild northern shores of Baffin Island. Lying within the Arctic territory of Nunavut, Baffin Island is the largest island in Canada and the fifth largest island in the world. It is likely the island was known to Pre-Columbian Norse explorers from Greenland and Iceland, and that it was the location of Helluland, spoken of in the Icelandic sagas. The island has been continuously inhabited by Inuit peoples for centuries.

With our daily plans determined by weather, tides ice, we go ashore to hike on the tundra in search of caribou and Arctic or follow our ship's botanist to learn more about the hardy miniature plants that cling to the exposed rock. As we cruise along the coastline, look for walrus and other wildlife icons of Canada's Far North. We'll also visit Bylot Island Migratory Bird Sanctuary, harboring large populations of thick-billed murres, black-legged kittiwakes greater snow geese. Three areas on the island are classified as Important Bird Areas in Canada and are protected within the bounds of Sirmilik National Park, one of Canada's newest parks established in 1999.

Day 14: At Sea in Bay
We make our way back across the wide expanse of Baffin Bay with a relaxing day at sea. Enjoy talks from our expedition staff, chat with the ship's officers and look for wildlife from the bridge.

Day 15: Disko Bay & Icefjord
Sail into Disko Bay, littered with massive icebergs, and continue up the Illulisat Icefjord to explore a tongue of the Greenland ice sheet. When Viking mariners under Erik the Red established a settlement on Greenland's more hospitable west coast in 985 AD, they discovered Disko Bay during a summer thaw. Rich in animal resources, including whales for oil, walruses for ivory and seals for their pelts, the region provided abundant products for early Norse settlers to trade with Iceland, the British Isles and mainland Europe. The Inuit later moved into the previously uninhabited region, and their traditional villages dot the shores today.

Located 155 miles north of the Arctic Circle, Icefjord is the sea mouth of Sermeq Kujalleq, one of the few glaciers via which the Greenland ice cap reaches the ocean. It is one of the fastest and most active glaciers in the world, moving as much as 60 feet in a day. The glacier annually calves 35 billion tons of ice, draining 6.5 percent of the ice sheet and spawning 10 percent of all icebergs in Greenland. Studied for more than 250 years, this glacier—previously called Jacobshavn— has helped to develop our understanding of climate change and icecap glaciology, and its significance has earned it UNESCO World Heritage Site recognition. The dramatic sounds of a rapidly moving glacial ice-stream calving into the fjord provides a thrilling natural phenomenon. We listen and observe from Zodiacs as we approach the glacier's face, though giant icebergs often crowd our path. Some are so huge—more than a half-mile high—that they lie stuck on the bottom until they are broken up by the force of other icebergs that float down the fjord to collide with them. We also explore the archaeological site at Sermermiut, where Inuit history dates back millennia.

Day 16: Exploring West Greenland
Our final day at sea is spent exploring more of the scenic fjords that indent Greenland's rugged west coast. Take a Zodiac cruise or paddle sea kayaks for a closer look at bobbing ice,  and possibly whales. Our undersea specialist may also launch the ROV, offering a chance to see the marine life inhabiting the fjord floor.

Days 17–18: Kangerlussuaq—Disembark / Reykjavik / Keflavik / Depart
Arriving once more in Kangerlussuaq, we disembark and return by flight to Reykjavik to spend two nights at the Grand Hotel. Day 15 includes your choice of sightseeing options: a full-day Golden Circle tour including waterfall, Geysir geothermal springs Thingvellir National Park, or choose between a walking or cycling tour of compact Reykjavik. On our final day in Iceland, more choices a soak in the famous Blue Lagoon; a tour of Reykjanes Peninsula; or an excursion to , geothermal power plant Icelandic horse farm. After lunch, transfer to the international airport in Keflavik for departing flights.


Click here to see your trip details PDF. You should also receive it by email momentarily.
Ask a Question
Fill out the form below to receive additional information about our Exploring Greenland & the Canadian High Arctic or give us a call at 800-543-8917.
Download Trip Details
Receive our handy trip PDF by email and have everything you need at your fingertips, including highlights of the trip, itinerary, accommodations, and full details on dates, prices and logistics.


Click here to see your trip details PDF. You should also receive it by email momentarily.
/adventure-cruises/greenland-canadian-arctic-cruise/itinerary/
Physical Requirements