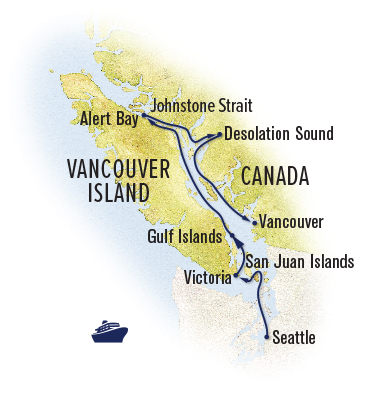 Please note: On departures, this itinerary operates in reverse.

Day 1: Seattle, Washington / Embark Ship
Arrive in Seattle and transfer to the pier to board the National Geographic Sea Bird. Once we cast off, we enjoy a cocktail cruise along the city's waterfront, admiring the ever-growing skyline with its famous icon, the Space Needle, on view to the north while Mt. Rainier rises like a giant white sentinel in the south. Making our way up through Puget Sound, we skirt Whidbey Island and the Kitsap Peninsula on our way to the San Juans.

Day 2: Exploring the San Juan Islands
Today is ours to discover the Northwest's most famous archipelago, the scenic, mellow San Juan Islands. Located in the northwest corner of Washington State in the heart of the Salish Sea, there are 172 named islands and reefs in the group. With pebbled beaches, forested mountains, golden meadows, and red-barked madronas hugging rocky shorelines, the islands epitomize the picturesque. A mild climate year-round creates an idyllic playground for sailors, kayakers, cyclists, hikers and wildlife lovers.

Our exact itinerary is unscripted, allowing the captain and expedition staff to make the most of the weather, tides and other considerations in determining our route. We focus on remote spots, including several islands that are Washington State Marine Parks accessible only by private boats. Sucia's protected coves are perfect for kayaking and paddleboarding; adjacent Matia offers plenty to discover by Zodiac, including a nearby sea lion haul-out; and we have special access to ashore on Vendovi Island, a private reserve. Throughout the day, look for seals, sea lions, river otters, bald eagles and the San Juans' famous orcas, easily identifiable by their prominent black dorsal fins.

Day 3: Friday Harbor / Whale Watching
Discover a livelier side of the San Juans this morning with a port of call at Friday Harbor. This compact waterfront town that hugs the hillside above the ferry landing is the largest community in these rural islands, bustling with shops, art galleries, cafes, restaurants and small inns. We visit the Whale Museum to see its fascinating collection of artifacts, artwork, whale skeletons. The museum was inspired by the presence of the Southern Resident community of orcas (sometimes called "killer whales"), which today is critically endangered and a bellwether of the Salish Sea ecosystem. The museum's mission is to promote stewardship of whales and the marine environments they depend on, through education and research.

Back on board, we set off for an afternoon of whale watching in Haro Strait, where we frequently see members of the Southern Resident group. Local orca expert Victoria Souza joins us, and she knows the local orca pods intimately, literally identifying each whale by name. These orcas evolved alongside salmon in the Pacific Ocean and learned over time to select the richest and most fat-laden species, the Chinook, or king, salmon, which remains their sole diet today. Orcas have historically found a great annual bounty in the Salish Sea, but Northwest Chinook runs have plummeted in recent decades, and the whales are struggling to survive. By spending time in their territory, we come away buoyed to support their conservation.

Day 4: Victoria, British Columbia
Clear Canadian customs this morning as we arrive in the charming city of Victoria. Surrounding the lively Inner Harbor, the city's historic core is replete with British character, which it still exudes with enthusiasm. It was initially established in 1843 as a Hudson's Bay Company fur-trading post on a site chosen by James Douglas, then British colonial governor of Vancouver Island. The post was eventually renamed Fort Victoria, in honor of Queen Victoria. In the early 1850s, Douglas negotiated treaties with the Coast Salish peoples on Vancouver Island, and the new settlers gained a foothold. The city later boomed during the Fraser River gold rush, and in 1871, when British Columbia became Canada's sixth province, Victoria was proclaimed its capital.

Today, in addition to being the seat of government, Victoria thrives on tourism, with plenty to delight the visitor. Choose from varied tailor-made activities, based on your interests. Flowers flourish in the mild, sunny climate, and a guided tour of some the city's lavish private gardens a chance to meet and hear from the gardeners. Or bike along the waterfront, indulge in fresh local fare on a culinary walk or peruse the collections in a sampler of the city's art galleries. If time permits have a look inside the famous Empress Hotel, an Edwardian landmark built in 1908 that is still the grande dame of Victoria. This evening, enjoy a private wine tasting and reception at the Robert Bateman Center as we take in the expansive collection of works by this renowned Canadian naturalist who is a celebrated painter of birds, wildlife scenes from nature.

Day 5: Exploring the Gulf Islands
Wake this morning in the Gulf Islands, which lie in the Strait of Georgia, wedged between Vancouver Island and the B.C. mainland. The islands are actually part of the same archipelago that comprises the San Juans to the south, though its name changes when we reach Canada. The larger islands feature rural landscapes and a serene pace of life, with a strong artist community and devotion to local food produced by artisan farmers. Other islands are barely populated, while numerous tiny islets are uninhabited but for the wildlife that thrives on these isolated outposts. Protected from fierce Pacific storms by the ridge of mountains down the center of Vancouver Island to the west, the Gulf Islands enjoy less than 30 inches of rain per year, with long, dry summers reminiscent more of the Mediterranean than these northerly latitudes. As our ship meanders through the islands, we’ll take our pick of perfect spots to kayak, hike and look for wildlife.

Day 6: Johnstone Strait—Orca Watching / Alert Bay
We sail through Johnstone Strait today, the world's premier place to watch orcas. This narrow, glacier-carved channel runs 68 miles along the northeast flank of Vancouver Island, and its waters are the summer home of more than 200 killer whales, or orcas, most of which linger into October. Orcas are actually the largest member of the dolphin family, though dolphins and whales are closely related, and together with porpoises, they comprise the order Cetacea. Orcas were given the name “killer whale” when early mariners observed groups of them hunting and preying on larger whale species.  Johnstone Strait is known for its mirror-calm waters, and conditions are often perfect for sea kayaking. From the we have a chance to observe orcas at eye-level, as well as other marine life such as Pacific white-sided dolphins, Dall’s porpoise, seals, sea lions and the occasional humpback, minke or gray whale.

This afternoon, we land in Alert Bay to visit the U'Mista Cultural Center, preserving the heritage of the Kwakwaka'wakw people. At the heart of the center's Potlatch Collection is a stunning array of carved wooden masks, and we learn about the stories of the creatures they represent, as well as the significance of the Potlach itself in and the role it played in the culture and ceremonies of Northwest Coast indigenous peoples. Continuing to the Big House, which is the social center and cultural cornerstone of the First Nations community here, we watch traditional dances by the T'sasala Cultural Group and listen to performers explain the story behind the movements that connect them with land, sky sea.

Day 7: Desolation Sound
Desolation Sound on the north end of BC's Sunshine Coast is a legendary destination for yachting, and it's easy to see why. Framed by the ice-crowned peaks of the Coast Range and fringed by old-growth temperate , the fjords and bays of this deepwater sound offer myriad opportunities for exploring this renowned marine wilderness. We spend the day cruising, paddling and hiking, surrounded by nature on a scale rarely encountered. With virtually no development or signs of permanent human presence, we're immersed in a powerful sense of the wild. When Captain George Vancouver first sailed these waters in 1792, the raw, remote nature of the region inspired him to name it Desolation Sound.

Kayaking is an especially appealing pursuit in these warm, sheltered waters, and there are many snug coves to poke into. Rocky islets studded with arbutus trees beckon us to step ashore, and hikes through deep green forest sanctuaries illumined with filtered sunlight lend a sense of peace and awe. Look for bald eagles that survey the sea from treetops, and watch for seals, sea lions, river otters and Dall's porpoise in the water. When the tide is out, colorful intertidal life invites close-up investigation, with large, bright sea stars a highlight. After an idyllic day in this North Pacific paradise, it's time to share a toast at the Captain's Farewell Dinner, enjoying last evening on board as we cruise the Inside Passage south to Vancouver.

Day 8: Vancouver, BC / Disembark / Depart
Our Northwest nature expedition comes to a close as we dock in Vancouver, the largest city in British Columbia, gateway to the Pacific Rim, and Canada's busiest seaport. Vancouver enjoys one of the world's most magnificent settings, almost completely surrounded by water, with the rugged North Shore Mountains rising in a green vertical backdrop. After breakfast, disembark the ship to meet connecting flights home. Or, if your schedule permits, spend some time exploring Vancouver, among Canada's densest and most ethnically diverse cities. Stanley Park is a treasure; at nearly 1,000 acres, it is one of the largest urban parks in the world. Vancouver is a popular filming location with a thriving art, theater and music scene, and the Museum of Anthropology on the University of British Columbia campus houses preeminent First Nations collections.