Fill out the form below to receive additional information about our Belize to Tikal: Reefs, Rivers & Ruins of the Maya World or give us a call at 800-543-8917.

Belize to Tikal: Reefs, Rivers & Ruins of the Maya World 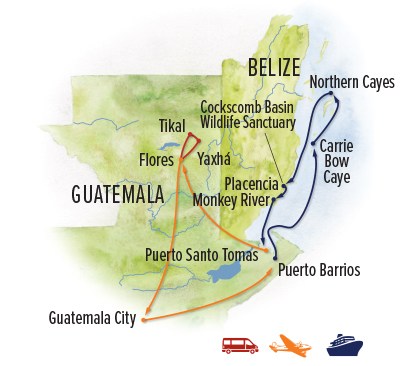 Spanning nearly 200 miles, the ecosystem has been recognized as a World Heritage Site for the tremendous biodiversity found among this collection of offshore atolls, several hundred sand cayes, mangrove forests, coastal lagoons and estuaries. The reef system was recently removed from UNESCO's List of World Heritage in Danger as a result of a series of successful conservation efforts enacted by the Belize government to protect the pristine environment from oil exploration and other industrial impacts. One of the most unspoiled reef ecosystems in the Western Hemisphere, it offers countless opportunities for exploration at sea and ashore on the many cayes. Some 100 species of coral provide significant habitat for threatened species, including marine turtles and West Indian manatees, not to mention rays, reef sharks and 500 species of tropical fish.

Paddle a kayak or stand-up paddleboard in the clear turquoise waters, or don a mask, fins and snorkel for an immersion in the undersea realm, swimming among sea turtles, rays, schools of tropical fish and harmless nurse sharks. Incredible dive opportunities abound for certified scuba divers (additional cost). Conditions permitting, we may have a beach barbecue lunch or dinner on one of the palm-studded cayes.  On Day 3 we visit the Smithsonian-operated research station at Carrie Bow Caye. Here, we learn about the comprehensive studies being conducted on the reef ecosystem, including the biodiversity, evolution, and ecology of its organisms and communities—effectively "taking the pulse" of the reef's health.

Day 4: Cockscomb Basin Wildlife Sanctuary
Today we explore Cockscomb Basin Wildlife Sanctuary, internationally recognized as the world’s first jaguar reserve. Covering 200 square miles, the reserve is one of the largest protected areas in Belize. Hike one of the many nature trails with the ship's naturalist guides, looking for the tracks of wild cats, tapir, deer and other animals often seen along the banks of South Stann Creek. Photograph lavish tropical plants and colorful flowers, and scan the forest for abundant birdlife. Afterward, stop at a traditional Maya handicraft center. A special highlight this evening is a performance by the globally acclaimed Garifuna Collective. Showcasing the powerful drumming Belize's indigenous Garifuna people are famous for, the music troupe also features high-energy guitar, bass and singing.

Day 5: Monkey River / Belize Barrier Reef
Early this morning, board local boats to cruise inland through this coastal river system. Along the Monkey River, lined with cecropia and kapok trees, the throaty roars of mantled howler monkeys echo through the canopy, green and spiny-tailed iguanas laze languidly on overhanging branches, and little blue herons work the shallows, watching and waiting for small fish, frogs and crustaceans.

We spend the afternoon exploring the southern cayes, the hundreds of coral patches that harbor parrotfish, butterflyfish, octopus, and other marine species. Activities are dictated by the rhythms of wind and wave, as we set out to snorkel, paddleboard, dive or kayak among the colorful corals and idyllic isles. Shallow lagoons are famed for crystal-blue waters and a high diversity of corals and fishes, and you'll feel like you're inside a giant aquarium as you plumb the calm sea inside the fringing reef, which contains some of the healthiest coral in the Caribbean.

Day 6: Puerto Santo Tomas, Guatemala—Disembark / Flores
Our idyllic time on the reef concludes as the National Geographic Quest sails on to Guatemala, with plenty of adventure yet ahead. We disembark in Puerto Santo Tomas this morning to meet our chartered flight to Flores and Tikal National Park. Stop for lunch at a picturesque restaurant overlooking Lake Peten Itza before transferring to the Hotel Camino Real Tikal (or similar). Check in on arrival, then take an optional birdwatching walk with our naturalists, or a sunset boat cruise on the lake.

Day 7: Tikal National Park
A full day is dedicated to exploring the marvels of Tikal, a UNESCO World Heritage Site that is one of the largest and most impressive archaeological sites and urban centers of the pre-Columbian Maya civilization. Surrounded by northern Guatemala's lush rain forest, Tikal was the capital of a conquest state that became one of the most powerful kingdoms of the ancient Maya, inhabited from the 4th century B.C. to the 10th century A.D. The ceremonial center contains superb temples, palaces and public squares, and Tikal is renowned among the most impressive architectural achievements of the Maya, all attained without the wheel or the use of block and tackle. Archaeologists believe Tikal may have had a population close to 90,000 at its height. Remnants of dwellings are scattered throughout the surrounding countryside, though once the city was abandoned, a century or so after its heyday around 800 A.D., the jungle quickly took over and enveloped much of it. Delve deep into Maya history and architecture on a guided exploration of the sprawling site, including Temple I, the steep-sided pyramid that rises 154 feet from the jungle floor, and the North and South Acropolis.

And while the ruins are captivating, so is the jungle setting. As you pass between the various facets, you'll walk beneath dense forest canopy with trees as tall as 180 feet. Tikal National Park is part of the much larger Maya Biosphere Reserve, which protects 5 million acres of the largest remaining natural forest block in Mesoamerica. On naturalist-guided hikes in the forest, keep an eye out for howler and spider monkeys, toucans, parrots, tapir, coatimundi, agouti and ocellated turkeys sporting a powder-blue head with orange bumps and iridescent feathers. Look, too, for giant ceiba trees—the sacred tree of the Maya—with our expert local guides.

Day 8: Yaxha
Today we visit Yaxha, the third-largest ruins in the Maya world, yet a little-touristed site. Yaxha is located approximately 18 miles southeast of Tikal, dramatically situated on a ridge overlooking Yaxha and Sacnab lakes. It is one of the few Maya sites still known by its Maya name, which means “green waters.” The complex was discovered in 1904 by Austrian explorer Teobert Maler, who was rowing across lake Yaxha and noticed an extended chain of elevations in the jungle, which he was convinced were Maya ruins. From 1969 to 1972, the American anthropologist Nicholas Hellmuth made the first excavations of the central area of Yaxha, and also made the first preliminary map of the site. Spread out over nine broad plazas, it contains some 500 structures, including five acropolises, two astronomical observatories, three ball courts and 40 stelae—tall sculpted stone shafts. During its apex in the 8th century, Yaxha was home to 20,000 people. We stop at a traditional Guatemalan restaurant for lunch today before returning to our hotel for a final night.

Day 9: Flores / Guatemala City / Depart
Our journey ends Flores, where we have pre-arranged a chartered flight to Guatemala City (at an additional cost) to connect with international flights home. You may opt out of this flight should you choose to spend more time in Flores or prefer to make independent arrangements to Guatemala City.

Please note: All day-by-day breakdowns are a sampling of the places we intend to visit, conditions permitting.


Click here to see your trip details PDF. You should also receive it by email momentarily.
Ask a Question
Fill out the form below to receive additional information about our Belize to Tikal: Reefs, Rivers & Ruins of the Maya World or give us a call at 800-543-8917.
Download Trip Details
Receive our handy trip PDF by email and have everything you need at your fingertips, including highlights of the trip, itinerary, accommodations, and full details on dates, prices and logistics.


Click here to see your trip details PDF. You should also receive it by email momentarily.
/adventure-cruises/belize-to-tikal-guatemala-adventure/itinerary/
Physical Requirements