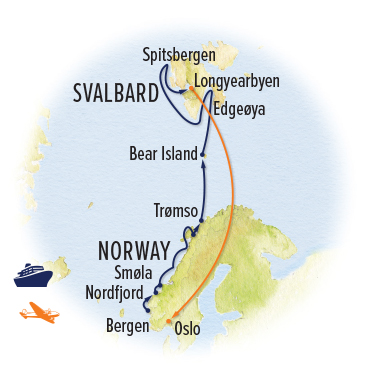 Day 2: Bergen / Embark Ship
Arrive in Bergen, Norway's second-largest city and the gateway to the . Founded more than 900 years ago, Bergen's roots date to the Viking Age and beyond. As one of the maintrading centers of the Hanseatic League, Bergen was for several centuries a prosperous hub of commerce among Norway and the rest of Europe. Bryggen, the Hanseatic Wharf, is the most evident remnant from this era and has been designated a UNESCO World Heritage Site. Today Bryggen bustles with many of the city’s restaurants, pubs, craft shops, art galleries and museums. The city's downtown fish market is also a famous hub of activity. Bergen enjoys a scenic location at the base of seven mountains, with its brightly colored houses climbing the slopes behind the harbor. This afternoon, embark ship and prepare to sail north through the Norwegian fjords.

Day 3: Nordfjord—Briksdal Glacier
Today our ship enters Nordfjord, a deep indentation reaching 66 miles into coastal Norway's imposing mountains and fed by Jostedalsbreen, Europe's largest mainland glacier. Reaching the end of the fjord this morning, we disembark to drive up the Loen Valley by coach, surrounded by some of the most idyllic scenery on Earth. As we skirt glassy turquoise Lake Lovatnet, steep peaks flank either side, their slopes sliced by waterfalls coursing down from the ice cap above. In the adjacent Olden Valley, we pass through green pastures dotted with cows and sod-roofed wooden huts to reach Briksdal Glacier at the valley's head. A walk along a roaring creek to the tongue of the glacier offers a closer view of its rough surface and blue crevasses. Several gentle trails in the region offer enticing hiking through the glacier-carved valleys filled with lakes, with more strenuous hikes also an option. This afternoon, you'll want to be out on for the voyage out of Nordfjord, with ice-capped peaks rising in all directions.

Days 4–6: Exploring the Wild Fjords of Norway
The fjord-rent coast of central Norway is as dramatic a landscape as exists on Earth. Mountainous islands rise from the deep-blue Atlantic, and steep-walled inlets bring the far inland. Our ship's Captain and Expedition Leader will discuss with local Norwegian pilots the many landing possibilities that are options: We may cruise by Zodiac along vertical rock faces, paddle kayaks in a deep teal fjord while dodging spray from cascading waterfalls, or step ashore for a hike with the ship's naturalist staff to a stunning overlook. Over the years, Lindblad's staff have discovered a number of special places to share with our guests, including . This narrow channel is surrounded by high granite cliffs polished smooth by the scouring motion of massive glaciers, and it is one of the most scenic spots on our voyage.

Day 7: Lofoten Islands
The Lofoten archipelago is an enchanting area of brightly colored fishing villages backed by jagged peaks that rear straight up from the sea. Though the islands lie north of the Arctic Circle, the climate is much milder than other parts of the world at the same latitude, due to the effects of the warming Gulf Stream. Clear, turquoise waters and white sandy beaches look deceptively tropical, though the mountains that define Lofoten assure travelers otherwise. We explore the coastline by Zodiac, viewing nesting seabirds that are abundant in these islands in summer—we're likely to see razorbills, guillemots and everyone's favorite, the Atlantic puffin, beloved for its whimsical, clown-like face and bright orange bill.

We go ashore on , the most southerly island in the chain, where cod fishing is still the foundation of the economy. Cod stocks have supported Lofoten for centuries, and the harbors are dotted with red-painted , or fishermen's cottages, that are a hallmark of the islands. Be sure you're on deck as we cruise into one of the most famous fjords in Norway, the short yet dramatic Trollfjord, where we'll search the cliffs for the namesake creatures of Norse mythology. The scenery is stupendous: the fjord's narrow entrance is just 300 feet wide, while the mountains that rise vertically on either side soar as high as 3,000 feet, with waterfalls plummeting to the sea from on high.

Day 8: Tysfjorden
As our ship weaves its way through the maze of channels, and islands that fracture Norway's western coast, the fjords continue to wow us with every new turn. Today we enter Tysfjorden, the deepest fjord in northern Norway, reaching nearly 3,000 feet below sea level near . Mile after mile of vertical walls tower over us, with just a few tiny villages clinging to the rocky shores. Tysfjorden is exceptionally remote; no tunnel or bridge spans its narrow breadth, and no road rounds the end of the fjord, which lies just 4 miles from the boundary with Sweden. By Zodiac and kayak, we get a closer look at the steep walls of the fjord, finding inspiration in the birch forests and tumbling waterfalls. Be sure to look up for views of 4, 564-foot Stetind, the grand peak that rises like a pointed obelisk over the fjord below. No doubt due to its dramatic shape and challenge to climbers, Stetind holds the status of Norway's "national peak." We'll go ashore at fjord's end to explore the U-shaped valley of Hellemobotn—evidence of its glacial-carved origins—via a trail that leads nearly to the Swedish border.

Day 9: Tromso
Tromso is the largest city in the Scandinavian Arctic, with 72,000 residents. A vibrant university town, Tromso is a major cultural hub in North Norway, drawing visitors to an array of festivals each summer celebrating everything from Viking heritage to jazz. The city's historic center, located on the island of Tromso, is known for its centuries-old wooden houses, the oldest dating to 1789. A more contemporary architectural landmark is the Arctic Cathedral, built in 1965. Its modernist profile, which evokes an iceberg with its distinctive peaked roof and soaring stained glass windows, dominates the skyline today. We'll visit the cathedral on a city tour, and also the Polar Museum. Located in the former Customs House on the quayside dating from 1830, the museum tells the stories of the many polar seafaring expeditions that have departed from Tromso, including journeys by legendary explorers Fridtjof Nansen and Roald Amundsen. In the dark winter months, Tromso is famed as a top location for viewing the northern lights. Tonight, we cast off for Svalbard, cruising ever northward.

Day 10: Bear Island
After setting out from Tromso into the open waters of the Barents Sea, we reach Bear Island, the southernmost island in the Svalbard archipelago. Its documented history begins in when Dutch explorer Willem Barents first sighted the island. Since 2002, it has been protected in its entirety as a nature reserve. Bear Island is uninhabited except for a manned weather station, though past centuries saw efforts to develop commercial enterprises such as coal mining, fishing, walrus hunting and whaling. Contrary to its name, you won't find bears here, though some polar bears do arrive for a temporary visit once the pack ice freezes. The only indigenous land mammals on the island are a few Arctic foxes.

At the southernmost tip of the island, vertical cliffs rise in angular columns from the sea. Perched on narrow ledges on the rock faces, we find some of the largest seabird colonies in Europe, earning Bear Island status as an Important Bird Area (IBA) by BirdLife International. The Norwegian Polar Institute conducts annual expeditions here for ornithological research, and we get our own close-up view via Zodiac, listening to the squawk of tens of thousands of northern fulmars, black-legged kittiwakes, little auks, and gulls. The island is often shrouded in mist, making for an evocative experience of the senses.

Days 11–15: Exploring High Arctic Svalbard
We spend five full days exploring the wild wonders of Svalbard, Norway's most northerly terrain. This island group lies well north of the Arctic Circle, between 74 and 81 degrees north latitude, where the midnight sun never sets in summer. In true expedition style, we let nature dictate our day-to-day movements as we explore this region, and this, by the way, is one of the great attractions of our Svalbard tour. Our flexible itinerary and years of experience here allow us to take the best advantage of ice and weather conditions in pursuit of Svalbard's abundant wildlife. With our fully stabilized, ice-class expedition ship, we are able to probe deep into the pack ice where polar bears hunt. Head up to the bridge to join our spotters, scanning the ice and islands for huge walrus, bearded and ringed seals, Arctic foxes, reindeer, enormous whales, and, of course, polar bears. Svalbard is one of the best places on the planet to see the King of the Arctic in its native sea ice habitat, and our team of naturalists does all it can to provide close-up sightings.

Various excursions get us off the ship and immersed in nature daily. Depending on conditions, we may go ashore to hike on the tundra, blooming with summer wildflowers. We often sail deep into Hornsund, where even first-time kayakers can paddle in a quiet cove surrounded by glittering icebergs. We may drift before the face of Monacobreen Glacier, waiting for a chunk of ice to calve with a thunderous crash, or cruise by Zodiac for close-up views of seals floating by on rafts of ice. Back on board, view underwater video from our ROV taken 1,000 feet below the surface, or spend time on deck with a National Geographic photographer for tips on getting the best shots of this magnificent landscape and its wild inhabitants. Every day is different, every day is a new adventure.

Day 16: Longyearbyen / Oslo
Returning to civilization, we reach Svalbard's main town and administrative center of Longyearbyen, where we disembark this morning. We'll visit the Svalbard Art Gallery and Museum for a look at the cultural and natural history of the region, including antique maps, contemporary art and the impacts of whaling, and World War II. We then proceed to the airport for our charter flight to Oslo. Check the SAS Radisson Blu Airport Hotel on arrival, for a final night in Norway.

Day 17: Oslo / Depart
A transfer to the airport is included this morning for departing flights.