Land of the Ice Bears: An In-Depth Exploration Of Arctic Svalbard 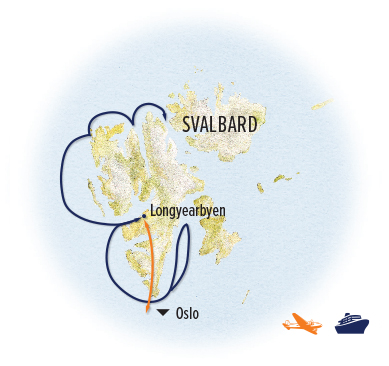 Day 2: Oslo, Norway—City Tour
Upon arrival in Oslo, check in to our hotel before embarking on a tour of this lively, sophisticated coastal city where each year the Nobel Peace Prize is awarded in the presence of the King of Norway. Our introduction begins with a stroll among the famed Vigeland sculptures—hundreds of life-size human figures set in rolling parkland. Our next stop is the Fram Museum, named for the restored 19th-century ship on display and dedicated to Norwegian polar explorers Fritjof Nansen and Roald Amundsen. The evening is free to try one of the harborside restaurants or turn in early to rest up after a long stretch of travel.

Day 3: Oslo / Longyearbyen—Embark Ship
Depart Oslo on our private chartered flight to Longyearbyen. Located on the island of Spitsbergen, which is the largest in the Svalbard archipelago, Longyearbyen is the administrative center and largest settlement in Svalbard, with about 2,100 residents. Visit the Svalbard Museum to learn more about Svalbard and its context in Norway and the Arctic, from 17th-century whaling to modern mining, research and tourism. Then tour the Gallery Svalbard to view the permanent art and cultural collections, as well as studios of local artists. Transfer to the pier to embark one of our two sister ships, the National Geographic Endurance or National Geographic Resolution, which will be our floating base for the next week as we go in search of polar bears and other Arctic wildlife so abundant in Svalbard.

Days 4–9: Exploring Svalbard
The itinerary for our Arctic adventure is truly exploratory by design, and our exact day-to-day movements will remain flexible in order to accommodate local conditions and pursue the best wildlife watching in the best locations. We'll spend six exhilarating days cruising among the icebergs that drift along Svalbard's rugged coast, utilizing our onboard fleet of Zodiacs for closer observation along the shoreline, and access land for guided hikes. In spring, conditions may permit us to set foot on the frozen ice directly off the ship.

Our focus each day is polar wildlife. While polar bears are a top draw, of course, we also look for bobbing seals, noisy herds of walrus, reindeer on the move, and the elegant Arctic fox. Cruising in Svalbard's dramatic fjords, our nimble ship gets close to the face of tidewater glaciers, and we wait for the telltale rumble and crack that signals an explosive calving. Via Zodiac and kayak, examine icebergs at eye level, admiring the blue tones reflected in the ice crystals. Ashore, learn about Svalbard's geology and hardy plant life, including the miniature wildflowers that bloom here later in the summer, providing dots of color in this otherwise monochrome landscape. Throughout this early-season journey, we take advantage of the ever-changing light that creates mesmerizing photography opportunities.

Day 10: Longyearbyen—Disembark / Oslo
Our polar bear expedition concludes as the National Geographic Endurance or National Geographic Resolution returns to port in Longyearbyen today. After disembarking, meet up with a local guide to take a short bus ride to Camp Barentz in nearby Advent Valley for a sampler of Arctic culture. Here, we discover a unique collection of buildings including an authentic gamme, a traditional round building with an open fire in the center, and a lavvo, the traditional tent of the Sami people. Enjoy refreshments and meet some of the friendly sled dogs that reside at camp before flying back to Oslo, then transferring to our hotel near the airport.

Day 11: Oslo / Depart
After breakfast, transfer to the airport for departing flights.

Land of the Ice Bears: An In-Depth Exploration Of Arctic Svalbard