Among the Great Whales 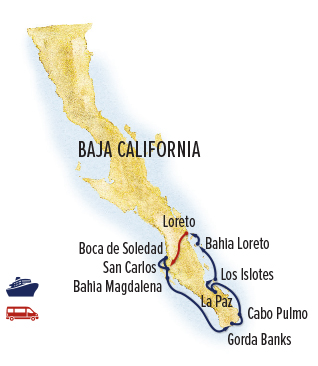 Note: Some departures travel in reverse, from Loreto to San Carlos, with the same stops included. If your voyage ends in San Carlos, you will be offered a transfer to the airport in Loreto at the end of your voyage.

Day 1: Loreto, Mexico / San Carlos—Embark Ship
Upon arrival at the airport in Loreto, transfer to San Carlos to embark ship. Settle in to your cabin and head up to the sundeck to admire the views as we prepare to sail. This evening, we anchor off the coast of Isla Santa Margarita, a sandy barrier island that separates Magdalena Bay from the Pacific Ocean.

Day 2: Bahia Almejas / Rehusa Channel / Isla Magdalena
Awake in Bahia Almejas, the southernmost part of Magdalena Bay, where we expect our first encounters with whales. Each winter, Pacific gray whales make the longest migration of any mammal, swimming south from their Arctic feeding grounds off Alaska to breed, birth and raise their young in the warm waters of Baja California's west coast. Bahia Magdalena (Magdalena Bay) is a primary breeding and calving area for gray whales, protected by a chain of barrier islands. We stop at a large frigatebird colony en route to the whale grounds of Bahia Almejas. During lunch, the ship will reposition to Isla Magdalena where we head to shore to explore the ever-shifting sand dunes on a walk across the island to one of Mexico's most pristine Pacific beaches. Bird watching here can be excellent—it’s not unusual to see 40 bird species in a single day along this shoreline, where migrators refuel for their destinations ahead.

Day 3: Boca de Soledad
Our ship remains in the heart of the gray whale's breeding grounds today. Marvel at these gentle giants that are often visible from the deck, then step ashore on Lopez Mateos where local fishermen guide us into the bay on Zodiacs to observe the numerous mother-calf pairs that thrive in this protected region. Birdwatching can be excellent here too, with magnificent frigatebirds, pelicans, cormorants, terns and great blue herons among the species we frequently see. We’ll eat lunch at a local restaurant before returning to the ship in late afternoon.

Day 4: Hull Canal / Cruising
Spend a final morning exploring Magdalena Bay’s vast mangrove system via kayak, stand-up paddleboard and Zodiac, learning from our naturalist guides about the importance of these massive ecosystems. This afternoon, we sail out through “La Entrada,” the Hull Canal’s narrow, navigable channel, as we leave Magdalena Bay to sail south along Baja's Pacific coast. This is where the rugged Baja California desert meets the sea, and the shoreline is marked with sand dunes, deserted white sand beaches and small fishing camps—as well as several famous surfing spots. At sea, keep watch for a diverse array of wildlife including seabirds, dolphins and maybe even the largest animal on Earth, the blue whale. Breathe in the salt air and watch the changing sky as you gain in-depth insights from the onboard naturalists who know these waters intimately. You may also choose to pursue some new photography skills under the guidance of the ship's National Geographic-certified photographer.

Day 5: Gorda Banks / Cabo Pulmo
Watch the sun come up as we cruise past Friars Rocks at Land's End. We spend the morning at the Gorda Banks sea mount, a gathering place for whales and dolphins. Humpback whales are often on view this time of year, and we may see tail lobbing, flipper slapping, spy-hopping and breaching. Our marine biologists and naturalists are at your side to share their extensive knowledge of this region and its species. Not only do they know where the best spots are to look for wildlife, their passion for the area is infectious—whether you ask a question or two, or spend an entire day in their company. After lunch, set out for the East Cape region of Baja California Sur to snorkel the reefs of Cabo Pulmo National Marine Park. Surrounded by uninhabited desert and rugged mountains, Cabo Pulmo has successfully preserved pristine beaches along a shallow bay with the only hard coral reef in North America. The reef is approximately 20,000 years old, among the oldest in the American Pacific. Fishing is restricted, and the marine life in these waters is prolific. Spend time learning about park’s conservation efforts with devoted locals whose advocacy for this pristine environment drove the effort to achieve official protection for Cabo Pulmo by the Mexican government.

Day 6: Los Islotes / La Paz
With deeply indented shorelines and dramatically eroded cliff faces, Los Islotes are some of the most beautiful islands in the Sea of Cortez. We swim and snorkel here, with equipment and instruction provided by the ship’s expedition staff. Curious sea lions often swim right up to us, eager to play. There’s also a chance to observe the islands’ rich geological history from a kayak, observing massive amounts of compacted volcanic ash covered with solidified lava floods, just yards from the shore. Seabirds abound, and brown pelicans, yellow-footed gulls and blue-footed boobies dot the landscape. This afternoon, take in vibrant La Paz, the capital city of Baja California Sur. With its lively street art and bustling waterfront Malecon, you’ll feel the romance of authentic Mexican culture. Dinner this evening is an unforgettable cultural experience, complete with local cuisine, dancing and folklore.

Day 7: Exploring the Sea of Cortez
With the luxury of flexibility and no set plan, we explore a sampler of the Sea's many uninhabited islands today.  Our captain and Expedition Leader will choose the optimal combination of activities for the day. Jacques Cousteau called the Sea of Cortez "the world's aquarium," and we get a feel for its tremendous biodiversity as we scout for marine life. We may spend the morning whale-watching around Isla Danzante, one of the best areas for finding blue whales, bottlenose dolphins and common dolphins. Rich in nutrients, the Sea of Cortez is home to a huge variety of fish, including king angelfish, surgeonfish, butterfly fish, damselfish and the vividly colored parrotfish. We may take a naturalist-led hike to a ridge for panoramic views over Isla Dazante or go ashore at Isla San Francisco, where an arc of white sand beach beckons you to kayak or
stand-up paddleboard. Another possibility is a visit to the abandoned salt works on Isla Carmen. Whether you're hiking, paddling or watching from the ship's bridge, you’ll observe a great diversity of birdlife—ladder-backed woodpeckers, Costa’s hummingbirds, Gila woodpeckers and verdin among them.

Day 8: Loreto—Disembark / Depart
Our whale-watching cruise comes to an end as we disembark this morning in Loreto, a peaceful colonial town founded in 1697 by Jesuit missionaries. Transfer to the small city's historic center to visit the first mission in Baja California—The Mission of Our Lady of Loreto—and the nearby museum, with free time to wander the compact Old Town. After lunch, transfer to the Loreto airport to meet departing flights.

Note: This itinerary should serve as a guideline only; the actual stops are determined by weather, wildlife activity, and a host of factors in order to provide the best possible experience. This flexibility is what makes traveling on our nimble expedition ships so much more rewarding than on a large vessel with a locked-in voyage plan. Some itineraries travel in reverse.

Among the Great Whales